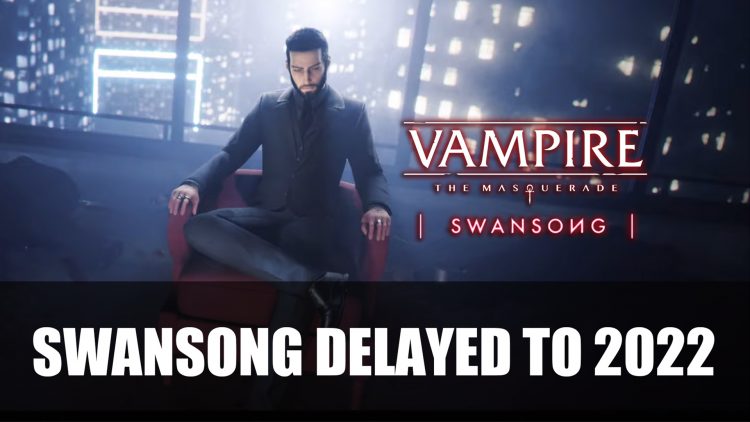 Publisher Nacon has announced the Vampire: The Masquerade – Swansong has been delayed to release next year.

Vampire: The Masquerade – Swansong Delayed to 2022

The upcoming Vampire: The Masquerade – Swansong has been delayed to next year. The narrative RPG originally was expected to launch this year on Xbox One, Xbox Series X, PS4, PS5, and PC but will now release in February 2022.

In case you missed it, Swansong was announced at PDXCon in 2019, set as a narrative-driven RPG, being developed by Big Bad Wolf who has released titles such as The Council, an episodic story-driven game with puzzles. Vampire the Masquerade – Swansong is part of the World of Darkness roleplaying universe.

Last month a new trailer was released previewing the vampire Leysha a Malkavian who is investigating a crime scene. Players take on the role of three playable characters in Swansong, set in Boston.

A new trailer was released featuring Galeb, which is accompanied by an introductory blurb about the vampire: “Power, wealth, immortality, at one point or another, Galeb has had it all. He’s traveled the world, amassed a fortune, and established himself as one of the oldest and most feared Vampires in the city of Boston. And yet, he’s left wanting, grasping for something he’s lost. Or perhaps something that was never there to begin with.”

From the looks of the trailer, Galeb is a much older vampire, seen and done a lot of things. He also seems to possess a mind control power as he causes his victim to pull the trigger unwillingly.

Vampire the Masquerade – Swansong will be now launching in February 2022 for Playstation 4, Playstation 5, Xbox One, Xbox Series X, Switch and PC via Epic Games Store.

For more news find it here in Dark Souls III Now Has FPS Boost On Xbox Series X|S and Rumor: Trademark Of “One Piece Odyssey” Could Be The Next One Piece Game By Bandai Namco.