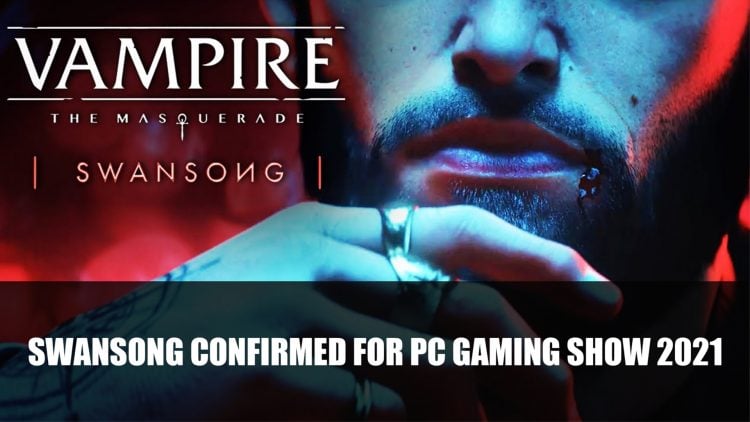 Developer Big Bad Wolf have confirmed the World of Darkness title Vampire: The Masquerade – Swansong will be attending both the PC Gaming Show 2021 and Nacon Connect.

The developer Big Bad Wolf has confirmed that the title will be holding a livestream at both this year’s PC Gaming Show and Nacon Connect. The PC Gaming Show will broadcast on Sunday June 13th at 2:30 PM PT, which will run for 90-minutes focusing on all things PC gaming. PC Gamer has already announced 39 new videos, game announcements and interviews to be part of the show. Nacon Connect will taking place on July 6th.

It’s nice to have Vampire: The Masquerade – Swansong at two upcoming conferences.

I hope you’re all ready to see a lot more of Swansong. 🦇 https://t.co/DK8b9dcDWP

In case you missed it, Swansong was announced at PDXCon in 2019, set as a narrative-driven RPG, being developed by Big Bad Wolf who has released titles such as The Council, an episodic story-driven game with puzzles. The last trailer released showed a number of night scenes, vampires doing their vampire thing but also shows what appears to be some sort of murder by a gunman. The trailer also detailed three different vampire stories intertwined, from clans Camarilla, set in Boston.

Hopefully, the upcoming shows will shed some more light on what’s behind Swansong, the direction they’re taking the game and of course some gameplay. Previously the title was slated for 2021, but no exact release has been announced as of yet.

You can check out the previous trailer below:

Vampire: The Masquerade – Swansong will be launching in 2021 for Playstation 4, Playstation 5, Xbox One, Xbox Series X, Switch and PC via Epic Games Store.

For more news you can find it here in Elden Ring Publisher Bandai Namco E3 2021 Broadcast Date Announced; Will There Be Elden Ring? and Genshin Impact Version 1.6 Update Is Now Available.