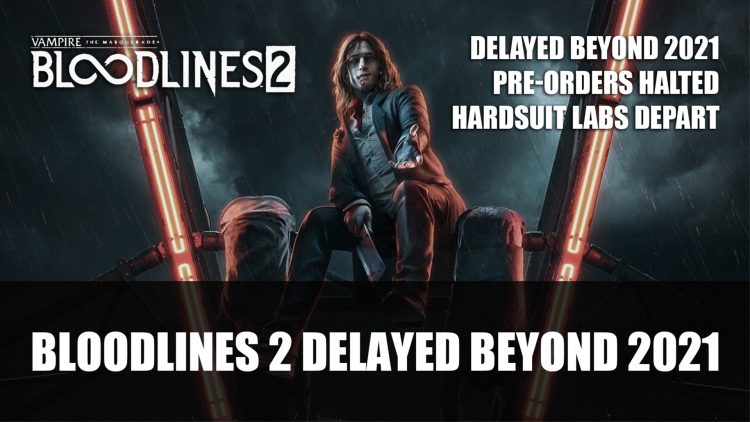 Paradox Interactive have announced the Vampire: The Masquerade Bloodlines 2 has now been delayed past 2021, as Hardsuit Labs leaves the project.

Paradox have announced that Vampire: The Masquerade – Bloodlines 2 will no longer be releasing 2021 as previously stated, and also announced that Hardsuit Labs have been removed from the project.

In Paradox’s latest earnings statement, Paradox explains that they have decided to postpone the launch of the game, and now parted ways with the Hardsuit Labs developer.

We have now chosen to postpone the release of [Vampire: The Masquerade Bloodlines 2] further, and we will not be launching the game in 2021. We have also decided that Hardsuit Labs will no longer be leading the development of Bloodlines 2, and we have started a collaboration with a new studio partner to finish work on the game. This has been a difficult decision, but we are convinced that it is the right way forward to do the game justice.

Another statement on the official website adds further details, explaining “Since we cannot at this time communicate a new release date, we’ve also decided to stop accepting pre-orders for the time being.”

For the time being pre-orders for Vampire: The Masquerade – Bloodlines 2 have been halted. There is so far no news on a new release window, but a vague window of after 2021.

The site also goes onto to thank Hardsuit for working on the game:

We’d like to take this opportunity to honor Hardsuit Labs for their efforts and thank them for their hard work on the project. The studio has done a tremendous job in laying the foundations for the game and we hope that you, the community, will also appreciate their contribution to Bloodlines 2.

This isn’t the first delay for the release of the game, as previously the title was supposed to launch last year in 2020.  Of course, last year wasn’t exactly a great year for anyone, which pushed the release date to this year. The developer shared that they needed “more time” to offer the “best player experience possible”.

Now Paradox will be working with a new team to finish the game, and details of the new development team will be shared in future.

In case you are unable to access the website, you can read the Bloodlines 2 Development Update right here. pic.twitter.com/kdTp5gpBJe

Vampire The Masquerade: Bloodlines 2 is an action-RPG set in the city of Seattle years after the events of the prequel. It is also based on the tabletop universe of the same name. Bloodlines 2 will follow the story of a young vampire after being turned, awakening to a world where various vampire clans are met with political factions, all fighting for control of the city. The gameplay takes on stealth and first-person combat which includes some supernatural vampire powers.

Paradox did release a development update but currently the website is experiencing higher than usual traffic which is causing some access issues.

For more news be sure to check out next Rumour: Starfield Release Window Leaked and Mount & Blade II: Bannerlord Announces Update To Add Battle Terrain System.

One comment on “Vampire: The Masquerade Bloodlines 2 Delayed Beyond 2021; Pre-Orders Halted”