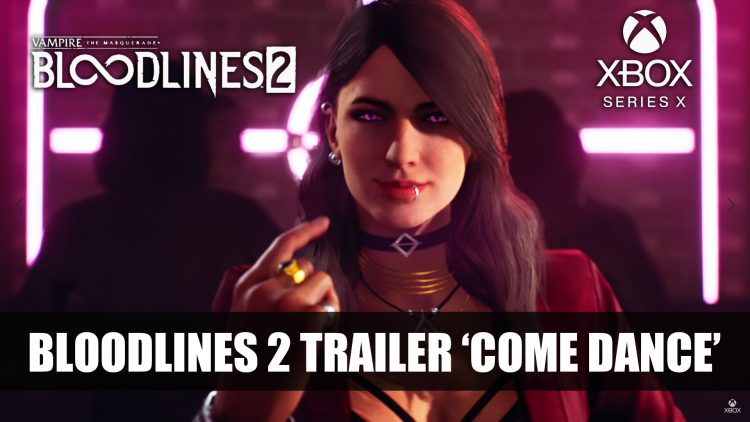 Along with a number of titles announced for Xbox Series X, the Vampire: The Masquerade: Bloodlines 2 was confirmed to be coming to Xbox Series X when it launches in holidays 2020.

During the livestream for the Inside Xbox event, the RPG Vampire: The Masquerade – Bloodlines 2 got a new trailer confirming it would indeed be coming to Xbox Series X. The title was originally suppose to launch in Q1 of 2020 but was delayed to the window of “some time in 2020” to assure a high quality game. With the announcement for the title to be coming to Xbox Series X, it might mean we are looking at towards the end of the year for its launch.

This trailer titled “Come Dance” is definitely much darker than previously shown footage, showing a disturbing opening scene of dead bodies being strung up like puppets, performing in some sort pretty morbid show to the tune of “Danke Schoen”. But it also shows more of the nightlife scene, and what happens when someone gets bitten. The whole trailer has a dark sense of humour and showcases some supernatural abilities.

Enter the World of Darkness and rise through vampire society. Experience Seattle – a city full of alluring, dangerous, characters and factions. You are dead now but stronger, quicker, more alluring and with potential for so much more. Choose to be brutal and unflinching or cultured and seductive. Use charm, cunning, terror and sheer will to rise through vampire society. What monster will you be?

Vampire: The Masquerade – Bloodlines 2 will be coming to Xbox Series X, Xbox One, PC via Paradox Store, Steam, GOG, Epic as well as Playstation 4 sometime in 2020.

Eager to see more Bloodlines 2? Be sure to check out our Vampire The Masquerade Bloodlines 2 Preview: Spectral Street Cred In Seattle which covers gameplay, narrative and more.

If you want more news about Xbox Series X titles be sure to read next Yakuza: Like A Dragon Comes To The West With Xbox Series X Launch and Assassin’s Creed Valhalla Gameplay Trailer Released.