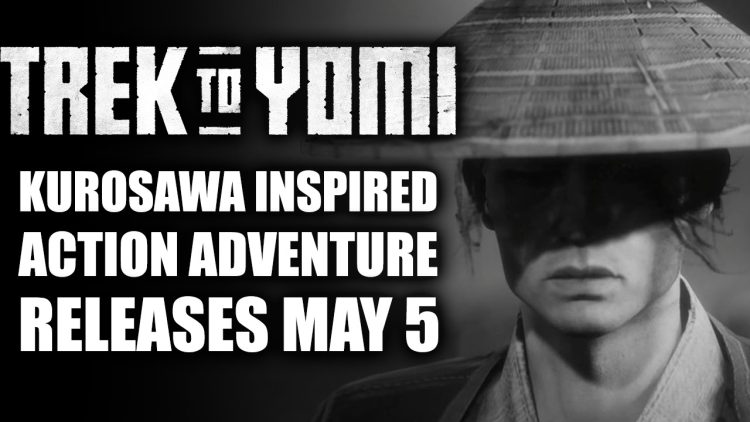 Trek to Yomi is an artistic samurai adventure game that is set to release on May 5, 2022.

Trek to Yomi is an Action Game Homage to Kurosawa Samurai Films, Releases May 5

Fans of Akira Kurosawa films and Ghost of Tsushima, rejoice! Releasing tomorrow from the publisher Devolver Digital is Trek to Yomi. Developed by Flying Wild Hog, this game looks to be the perfect homage to the Kurosawa samurai movies.

Trek to Yomi follows the footsteps of Hiroki, a young samurai. He is on a journey to fulfil his master’s dying wish: to protect the village and the people from all who would do them harm.

Black and White and Read All Over

The most striking aspect of Trek to Yomi would be its overall aesthetic. It can instantly be reminiscent of Kurosawa’s classic films such as Seven Samurai or The Hidden Fortress. Trek to Yomi just oozes style.

Much like the old films, Trek to Yomi is in pure black and white. The game even features an unobtrusive “film grain” effect that adds to the retro feel. It is through this color palette that the sense of loneliness and coldness can be felt, mimicking Hiroki’s journey. Scenes and tones are all bleak and contribute to this feeling.

Lighting also plays a huge part in creating the world and setting its tone. Trek to Yomi excellently highlights things that should be given importance. It can also create a dramatic effect here and there.

Even though the game is in black and white, Trek to Yomi does not make it difficult to navigate and interact with the environment. Interactables such as pushcarts or trees have subtle little sprites that have a soft glow to them. They are just enough to call attention to them but not detract or distract from the rest of the breathtaking scenery.

Most of Trek to Yomi is grounded in reality. The opening trailer shows us peeks of Hiroki exploring various temples, villages, forests, and bridges. He fights what are mostly bandits and saves peasants from getting assaulted.

However, we also get some more supernatural elements. We can also see that Hiroki will need to face off against some kind of demonic sword-wielding banshee. It also seems that he’ll need to deal with a portal into the underworld.

Trek to Yomi alternates between linear exploration through winding set pieces. While the game is primarily a side scroller, exploration can involve moving towards or away from the camera at times. When in combat, however, the perspective changes.

Fights are always set in a side-scrolling perspective, with enemies either in front of you, behind you, or both. Foes can rush towards you or make strategic steps and wait for their allies to flank you.

Hiroki can fight like any samurai would. He can parry, block and dodge as long as it’s either to the left or right due to the perspective. Hitting enemies though is where he excels. Just like in the Kurosawa films, fighting in Trek to Yomi is quick and brutal.

While timing your attacks and parries are of utmost importance, choosing what attacks to employ is also a piece of the puzzle. Players would need to decide which kinds of moves work best in the situation. Do you swing towards your enemy’s exposed midpoint? Or stab them if they overextend?

As long as you’re victorious, Trek to Yomi’s combat experience is also quite cinematic. Its grounded settings as well as quick, intense fights create a feeling of tension. Clean kills are also rewarded with brutal execution moves such as beheadings or stabbing enemies in their backs, but stylishly.

Devolver Digital, Leonard Menchiari, and Flying Wild Hog seem to have something great here in Trek to Yomi. The action, style, sounds, and sights are all expertly done and are indeed great homages to samurai movies of old.

Trek to Yomi will be available starting May 5, 2022. Its regular price is $19.99 but has a $2 launch discount until May 9th. It will be playable on Steam, GoG, PlayStation 4, PlayStation 5, Xbox One, and Xbox Series X|S.

For more news, check out Eldest Souls Action-RPG First Expansion Depths of the Forgotten Now Available and Going Rogue: A Steam Sale that Features Roguelikes, Soulslikes, and Metroidvanias, Runs from May 2 to 9.