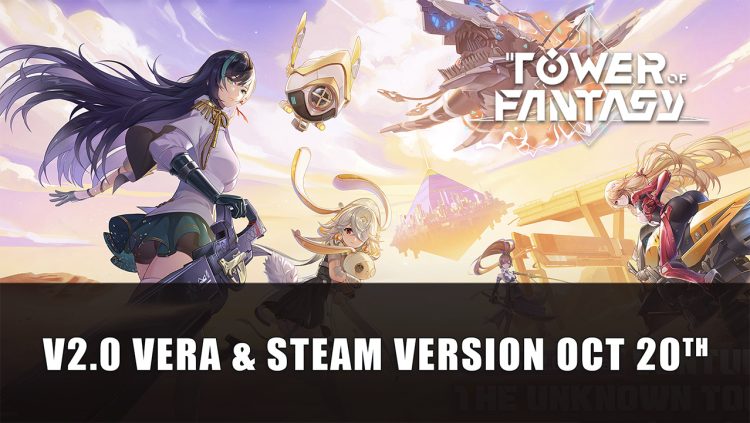 Tower of Fantasy will be getting an update version 2.o called Vera and Steam version on October 20th.

The free-to-play MMORPG Tower of Fantasy will be gaining an expansion, Version 2.0 called Vera will be coming to PC, iOS and Android on October 20th. Alongside the update, the game will be launching on Steam.

When ToF was released in August the title came only to PC as a standalone client, now the title is also coming to the Steam platform which will be getting 2.0 update version.

The expansion has been teased to have two main areas, the Desert Gobby and the cyberpunk-looking Mirroria city. The new areas will have more content for players to enjoy, including events, raids, instances, monsters, legendary bosses, new vehicles and weapons.

We also previously got a teaser trailer that showed a new mount yellow-taxi looking hoverbikes and a flying, robotic-looking boss.

In case you missed it, Tower of Fantasy follows the strange and beautiful world of Aida. Not all is well on Aida as resources as now scarce and dwindling energy means being able to rebuild mankind is not an option. But not all hope is lost as a new energy source called “Omnium”. The once lush world is now in disarray and is the backdrop for the brother and sister characters called Zeke and Shirli. These pivotal characters have quite the burden. Players will get to choose from different weapons/characters that use a mix of hack ‘n’ slash and even guns to fight.

If you’re just diving into Tower of Fantasy be sure to check out our Tower Of Fantasy Getting Started Guide and for a free-to-play friendly build have a look at Ene, The Ice Pummeler.

Tower of Fantasy is currently available to play for free on PC, iOS and Android. Version 2.0 Vera and Steam version will release on October 20th.

For more news find it here in Soul Hackers 2 To Get Update That Adds High-Speed Mode, Dashing And Demons and Warhammer 40,000: Darktide Sheds Light On The Zealot Archetype As It Prepares For Closed Beta.