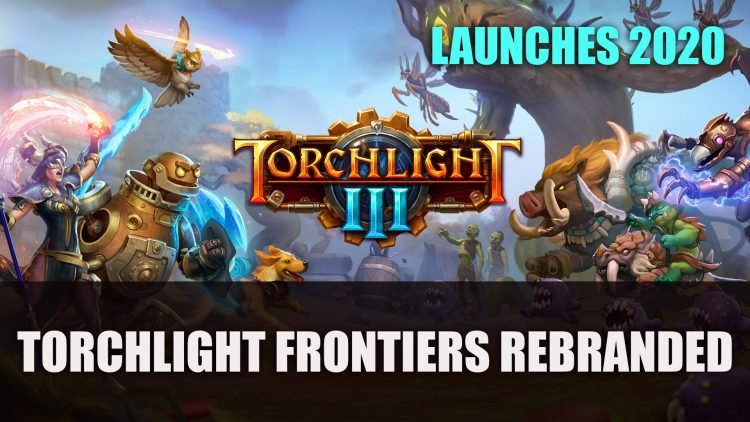 Originally called Torchlight Frontiers, publisher Perfect World Entertainment has announced that it will now be released as Torchlight 3 this year.

Torchlight Frontiers has now been rebranded, as publisher Perfect World Entertainment have shared it will now launch as a premium title instead of free-to-play. The title not only get’s a new name, but also has gone through a major overhaul, as well changes to where you can grab the title. A lot of these changes have been due to feedback received during alpha testing the developer explains. It is the spiritual successors of Torchlight and Torchlight 2. Other major changes include offering all content on day one, and removing the in-game real money store.

A new video has been released announcing further details, this includes sharing that the game which was set to launch on the Arc store, is now going to be made available on Steam. You can check out the official description below and video:

If you want to be included in upcoming beta tests, you can check out the official website for more info.

It’s been centuries since the events of Torchlight II, and the Ember Empire is in decline. In Torchlight III, Novastraia is again under threat of invasion and it’s up to you to defend against the Netherim and its allies. Gather your wits and brave the frontier to find fame, glory, and a new adventure!

Explore the wilderness, party with friends, gather materials to craft loot, use magical maps to enter unknown dungeons, or show off your spoils in town! There’s always something to do in the new frontier.

It’s time to rebuild – and that includes you! Enjoy your very own fort, where you can upgrade gear, and renovate your fort to show off to your friends and the world. Build monuments of power, pet stables, and more!

Whether it’s armor, weapons, dyes, recipes, ember cores, or even new pets…there’s always more to find as you battle through dungeons and take on dangerous foes. Every randomly-generated area can be replayed over and over again since each instance brings different items. Want even more epic gear? Take on a contract to earn Fame and unlock elite items.

Fight your way to fame and glory with your loyal companion! Each species comes in a myriad of colors and styles so don’t settle for the first one you find. Make them stronger by adding skills, equip them with gear to make them hardier, and together battle your way through enemies as a team.

With four classes to choose from, utilize class-specific mechanics to maximize your damage and your odds of survival. Gather epic gear and customize your outfit to work with your hero’s unique make-up.

Torchlight 3 will be releasing sometime this year on PC via Steam.

For a roundup of recent news watch/read our Top RPG News Of The Week: January 26th (MHW, Godfall, Wasteland Remasters And More!).