Welcome to the Top 5 Upcoming RPGs of June 2022! In this series, we highlight the Top 5 RPGs for the upcoming month. In this edition, we’re going to take a look at each of the titles, talk a little about each, and then explain why we think they deserve to be on the list. So join me now and find a mixture of some hidden gems and old favorites given a shiny new coat of paint.

Last month we saw the release of the latest expansion for Monster Hunter Rise called Sunbreak which let players embark upon new challenges with a new biome, monsters and more. This month we have some classic CRPG influence, some tactical and action combat as well as a new entry to a JRPG series. There’s something for everyone with a mix of fantasy and sci-fi horror ready to set you up for the month of July. Without further ado let’s get into it! 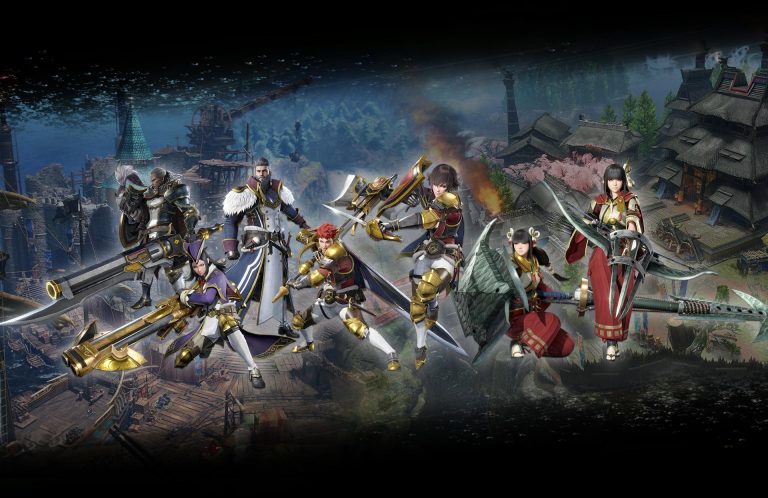 The sci-fi Action-RPG comes to next-gen (or current-gen depending on how you look at it) platforms this month. Aboard the ship Irid Nova, once a mega-colony of Arcology, the space station was once home to 100,000 souls. These days it’s more of a ghost ship since the Merge took place. Now Parasites and the Daemonium consume the dead.

Players will face the isolated space station which plays host to hellish enemies, the stuff of nightmares. Take on challenging foes while discovering even more gruesome ways to die with the alien-like bosses.

Alongside the 4K upgrade, improved resolution, FPS and faster loading,  players will be able to pick up the Blue Sun expansion. Blue Sun offers three new locations, new armor sets, two-handed weapons and a contract system. New features such as stats respec and inventory management also come with the update.

Drawing inspiration from Dark Souls and Dead Space, players will also experience influences from movies such as Event Horizon and Hellraiser. If this combination intrigues, imagine what hellish experiences await in Hellpoint.

Hellpoint will be releasing on Playstation 5 and Xbox Series X|S on July 12th. Currently available on Switch, PS4, Xbox One and PC. 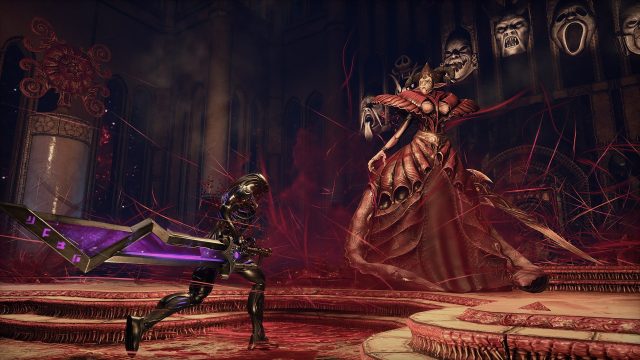 5. Immortal Tactics: War of the Eternals

In a nostalgic 2D pixel art style, Immortal Tactics: War of the Eternals takes on new turn-based combat systems that will combine interesting choices and strategies. Explore the world of Amatereia on the quest to defeat the Celestial Void. The void is corrupting the souls of the innocent, which you will need to fight and free them.

Unlike usual turn-based games where you will need to alternate units’ moves and attacks, Immortal requires careful crafting of your next move. As you explore the world encountering different enemies and creatures on a hexagon grid board, you will need to consider the environment as well as your foes. The game boasts tons of replayability as it contains both roguelite and roguelike elements with fast-paced battles and procedurally generated levels. Combining classic CRPG traits as well as a pixel nostalgic aesthetic with some refreshing game mechanics.

Battles can also have win conditions these include defeating all enemies, leaving no one alive, or such constraints as time, having to win in less than 9 turns, and adding further challenges to your adventure. Throw in some environmental damage, things can take an interesting turn with thunderstorms and more.

Immortal Tactics: War of the Eternals releases in Early Access on PC on July 15th. You can also check out the demo on Steam. 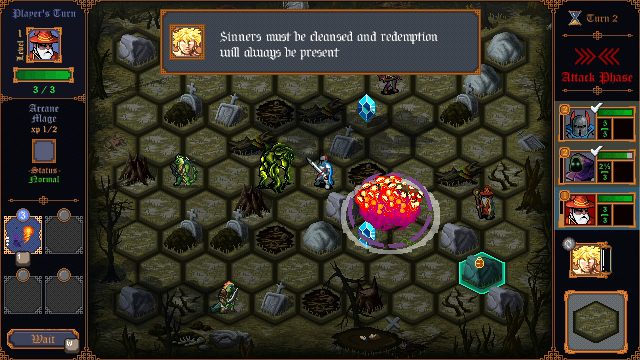 Be wary of your environment as well as your foes in Immortal Tactics: War of the Eternals.

Leaving early access this month is the 2D Action-RPG side-scroller Lost Epic. Players will embark on a journey across the world known as the Sanctum with the quest to bring the Pantheon of Six to their knees. The game offers fast-paced action-packed battles with a range of ways to progress your character with skills and upgradeable weapons. Players can dive into Lost Epic to become the God Slayer, and defend humanity against the vengeful deities. Face mighty bosses in six different worlds, and summon allies to aid you.

Activating the use of a Divine skill at the opportune moment will take down an enemy and deal massive damage. Build your own character using skill points to upgrade character stats whether you want to concentrate on strength, skill or magic. Craft items using the materials you acquire along the way even through fishing.

Stepping out of Early Access on launch day, players will also be able to tackle the Sky Spire, a new world inhabited by a fearsome raid boss. The Action-RPG also features a crossover with Earth’s Dawn, gaining the Regalia blade, Staff and Shield, plus new materials to enhance weapons as well as characters.

Lost Epic will be fully launching on PC, as well as coming to Playstation 4 and Playstation 5 on July 28th. 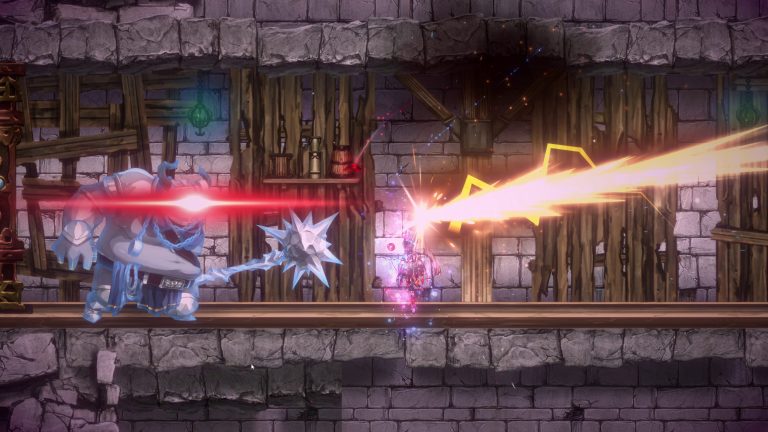 Get ready to join your favourite digital monsters in the upcoming turn-based RPG Digimon Survive. Featuring a brand new cast of characters, players will follow the gang led by Takuma Momozuka as they fall into an unfamiliar world. This strange new land is filled with amazing monsters known as Digimon. While some seem to be friendly others are not. It will be up to Takuma to navigate this world along with his friends and some Digimon who will aid them in battles.

Players will get to collect, train and do battle with these formidable monsters, with 113 Digimon to catch. The roster of Digimon is a mix of some old faves and new. The game mixes visual novel with turn-based battles. Explore the world in Free Expedition to investigate the map, interact with friends and engage in battles. In Exploration mode, players will trigger the main quest and even use a phone’s camera to investigate hidden objects.

Battles with Digimon consist of a grid-based tactical RPG combat setup, with monsters’ speed determining turn order. Players will need to be mindful of the battlefield and use powerful attacks plus Digivolving to overcome stronger opponents.

Digimon Survive releases on July 29th for Switch, Playstation 4, Xbox One and PC. 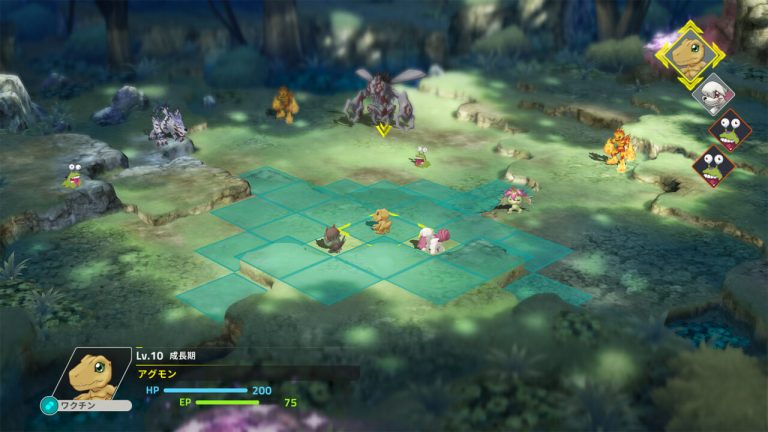 2. Alaloth – Champion of The Four Kingdoms

Publisher: All in! Games

Entering Early Access this month, is the medieval-inspired Alaloth – Champion of The Four Kingdoms. This isometric souls-like follows the dark god known as Alaloth who once turned on his pantheon, venturing into mortal realms. Now trapped in the Valley of Storms, where the great four kingdoms lie, his influence seems to spread throughout kingdoms. Touching upon the humans, orcs, elves and dwarves. Will you be able to overcome the storms, monsters, plagues, strife and dragons that curse the lands and defeat Alaloth in his prison?

Inspired by classic RPG titles such as Baldur’s Gate and Pillars of Eternity, players will face isometric combat allowing players to plan their moves in challenging fights with a deep combat system. Customise your own warrior by choosing from the three: Ways of Power, Arms, Gods and Nature, each with its own professions to choose from. Just as with any souls game, using special abilities or skills will deplete your energy, while attacking blocking, dodging and parrying will use up your stamina. Meet twelve different NPCs that you can join on quests depending on the alignment of their character. While you embark on a major adventure, you can also choose to pick up quests from NPCs as well as quest boards.

On your travels you may run into champions from other houses but also come face to face with bandits. Should you fall to your demise, you will become a ghost on the map and will need to go to the nearest resurrection shrine to regain your equipment or it will be forever lost.

Alaloth: Champions of the Four Kingdoms will be entering early access on June 30th on PC via Steam and GOG. 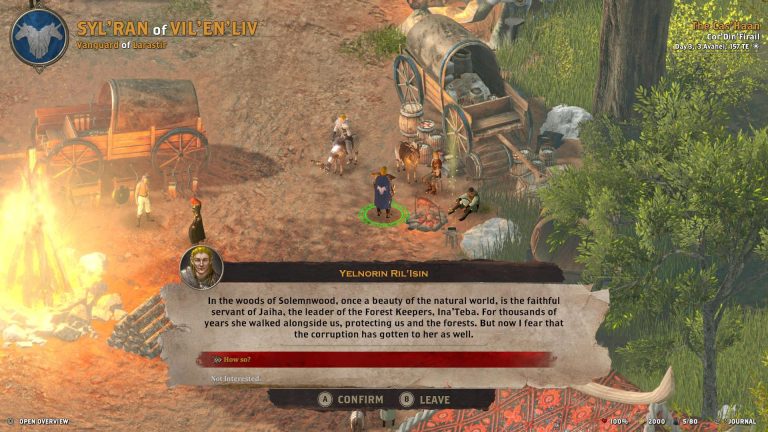 Alaloth: Champions of the Four Kingdoms unleashes its isometric action, inspired by classic CRPGs this month in its full launch.

Taking our top spot this month is Xenoblade Chronicles 3. This title follows the main characters Noah hailing from Keves and Mio from Agnus as they travel between the two turbulent nations. Joining Noah will be a party of six characters from both of these nations. Setting out together, they are on the path to uncover the truth behind the conflict as well as reach Swordsmarch. The world of Aionios is beautiful but is caught up in death, war and strife. The people of this land only have a mere 10 year lifespan, but things take a strange turn when unknown figure emerges appearing much only older.

As the characters traverse the lands they’ll run into monsters and other encounters depending on the time of day. Exploring does take its toll, so finding Rest Spots to camp, restock items and cook will be key. Combat builds on that of Xenoblade Chronicles 2, controlling six characters with a 7th special temporary party member that join in on combat too.

Players can attack foes by walking up to an enemy and drawing their weapon, taking on one of the three distinct roles, Attackers, Defenders and Healers. Each class has their own speciality for example Attackers have the Swordfighter which is balance between defense and damage, while Ogres concentrate on taking down the enemy’s defense with crushing blows.

This party system also comes with combined abilities called the Ouroboros, linking two specific character’s consciousness to summon a mighty creature. Ouroboros are powerful beings that can unleash devastating attacks but last for a limited time on the battlefield. The Ouroboros’ attacks can even be chained with the rest of the party’s Arts, creating even more opportunities for creative combos.

Xenoblade Chronicles 3 will release on July 29th 2022 on Nintendo Switch. 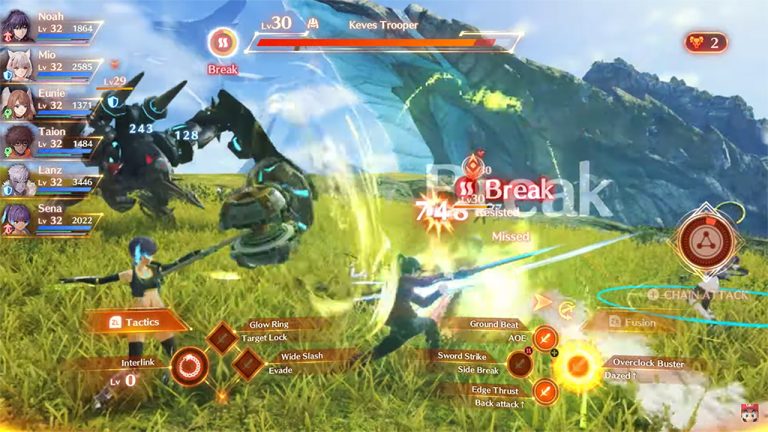 Xenoblade Chronicles 3 has a party-based system, letting you swap between characters and even combine to unleash an Ouroboros!