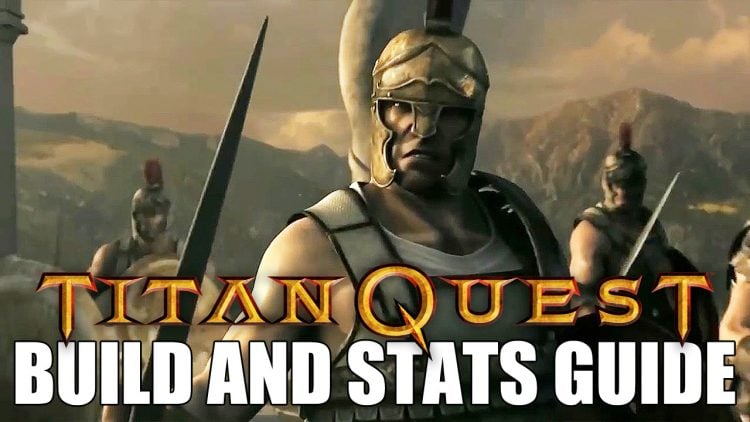 Many things have changed since THQ published their mythos-based hack ‘n slash RPG Titan Quest back in 2006, and most of those changes have been to the way that Stats work within the game. With the console release just a week old now, I thought it would be helpful to let the new console players (PS4 and Xbox One) in on many secrets that we PC veterans have known for years. This is particularly pertinent to Builds, and is information you may have a harder time finding now that the Titan Quest forums are no longer online.

The first thing we’ll talk about is Attributes because they are extremely important to the way you build your character, and unlike Skill Points, you cannot refund Attribute Points, so if you spend them incorrectly then you are pretty screwed. You gain 2 Attribute Points per level, and gain a few here and there through various quests, giving you a total of 166 Attribute Points to spend if you complete all three difficulties and do all related Side Quests. It is unlikely you will reach level cap though as it takes hundreds of hours, so realistically you’re looking at some where around 140 ish Attribute Points. Each Attribute you spend will give you either 40 Health, 40 Energy, +4 Strength, +4 Intelligence or +4 Dexterity. 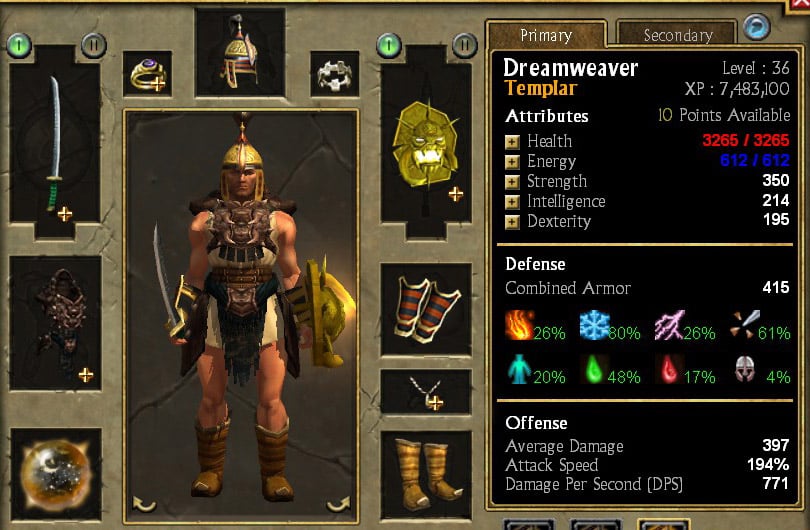 There are 5 main Attributes in Titan Quest and loads of other Stats.

Health is pretty straight forward. You gain +40 Health per Attribute Point spent, and you will also gain Health when spending Skill Points on the Mastery of each of your two Skill Trees. How much you gain depends on which Skill Trees you have, and I have listed them in the table below, along with other Attributes. You will also gain permanent Health bonuses from completing quests for a total of 855 (if you complete all 3 difficulties). Melee Builds will obviously need more than Ranged Builds so plan accordingly, but generally you should not need to spend Attribute Points on Health.

Like Health, Energy is a pretty straight forward. You gain +40 Energy per Attribute Point spent, and you will gain Energy when spending Skill Points on the Mastery of any Skill Tree that gives Energy. Again, like Health, this will depend on the Skill Tree, and not all Skill Trees provide Energy. Unlike Health, however, there are no quests that reward permanent increases to Energy. Casting Builds will consume much more Energy than Martial Builds, so depending on how you make your character you may need to add points into this Attribute. Hybrid Builds generally need to spend points here because one of their Skill Trees provides no Energy.

Table of all Attributes total gained from each Mastery. Click to enlarge!

Armor and Blocking in Titan Quest isn’t extremely complicated but isn’t as simple as you would think. Obviously having more Armor and higher Block Chance are good, but how to make a Build revolving around these concepts requires some knowledge of the game (especially if you are to survive higher difficulties). Let’s take a look how these two things work, starting with Armor. 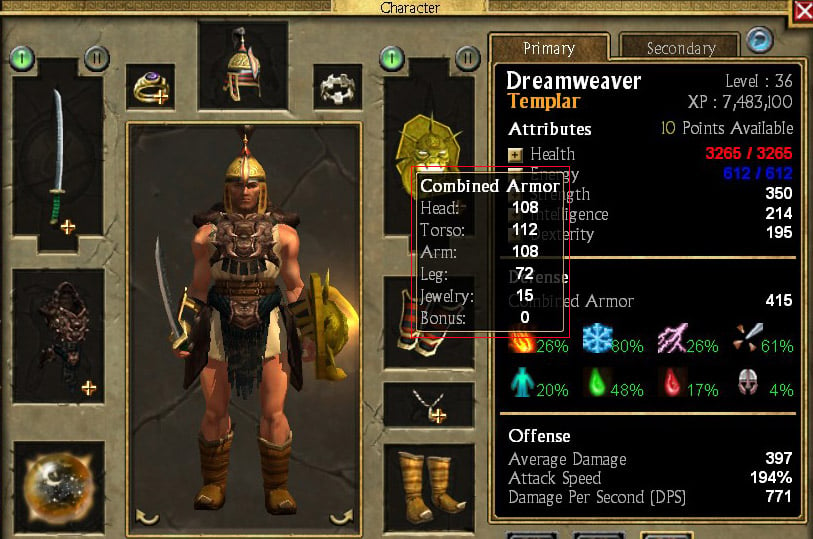 You are most likely to be hit in the Torso, but you will be hit in other places as well. Be sure to have good Armor Values there or you will take high damage when you are.

Once the Armor piece hit has been determined you will take 66% percent of that Armor piece’s Armor Value and subtract it directly from the damage of the enemy’s attack. Yes you read that right, you actually only mitigate 66% of the Armor number listed for that piece. If you have rings, amulets or Skills that increase your Armor, these are added to the Armor Value each piece of Armor you are wearing before this calculation takes place. For example if you are struck in the legs and have 120 Armor there, but you are using the skill Battle Awareness and it says 12 Armor, you will take 66% of 132 instead of 120.

Players can reduce the amount of damage that their Armor “lets through” by increasing their Armor Absorption. Armor Absorption adds directly with the 66% modifier that all players have by default, so for example if you have +14% Armor Absorption then your modifier becomes 80%, making your Armor more effective. The easiest and most notable way to do that is by taking the Armor Handing skill in the Defense Mastery Skill Tree. Armor Protection is not the same thing, and only increases the Armor Value of each piece you are wearing, not the modifier. 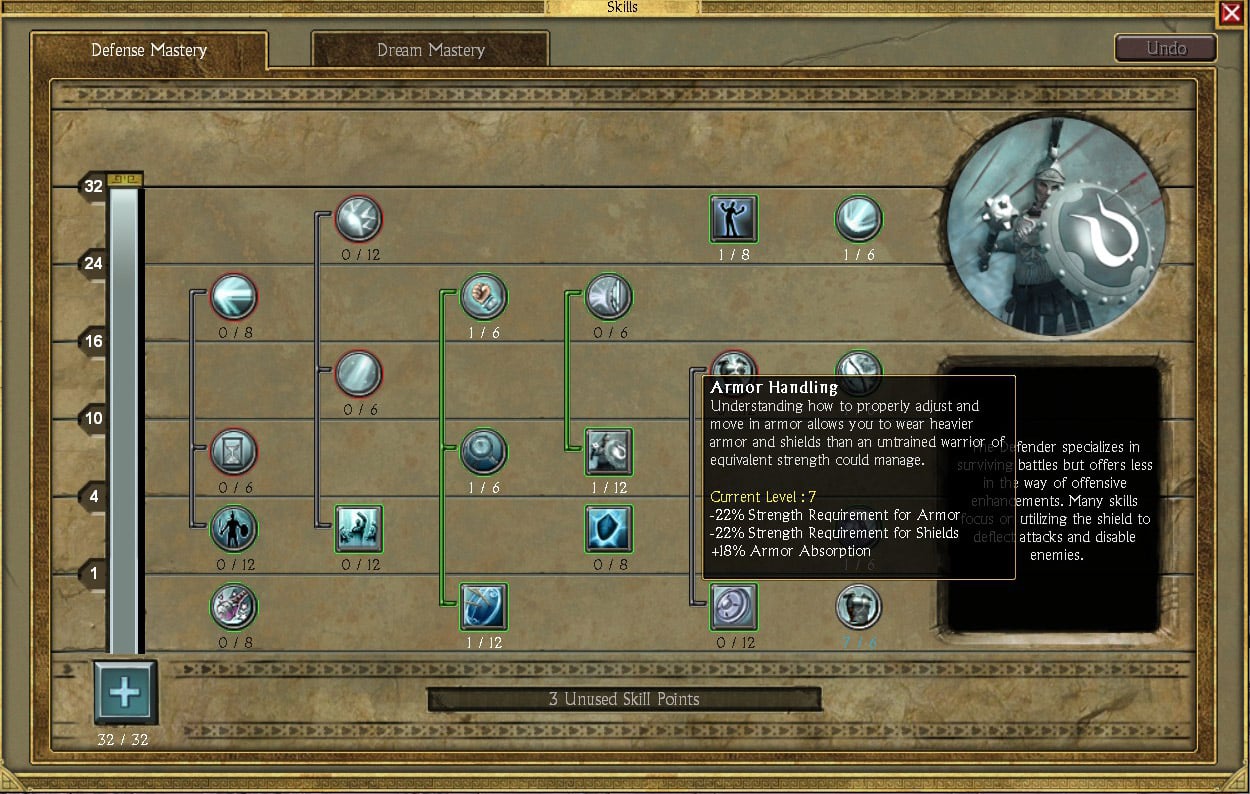 Armor Absorption increases the percentage of damage your Armor can mitigate.

In Titan Quest Blocking works passively for any character equipped with a Shield, and unlike Armor, Shields can Block any type of Damage (as well as projectiles). Each Shield has a Chance to Block a certain amount of Damage, but this Block can only occur a maximum of once every 3 seconds by default. Block Chance is additive, so stacking it will help to increase the frequency that you Block, but it is equally important to reduce the “cooldown” between Blocks. Thankfully the skill Quick Recovery in the Defense Mastery Tree helps with this, as do some equipment you can find.

When you successfully roll a “Block” you will attempt to negate the damage done, however, if the damage is more than your Shield is capable of Blocking then you will take 100% of that damage. Yes you read that right, if you cannot Block ALL of the damage you will take ALL of the damage. The good news though, is that the damage you must Block is calculated after Armor and Resistances, so there is a much higher chance for you to succeed. Damage over time you take can also be Blocked as well, and if the initial tick of damage is Blocked then ALL the damage is Blocked. This is why it is important to have the highest Block Damage you can on your Shield, and you may want to consider replacing an old Shield with a new one if you haven’t in awhile. 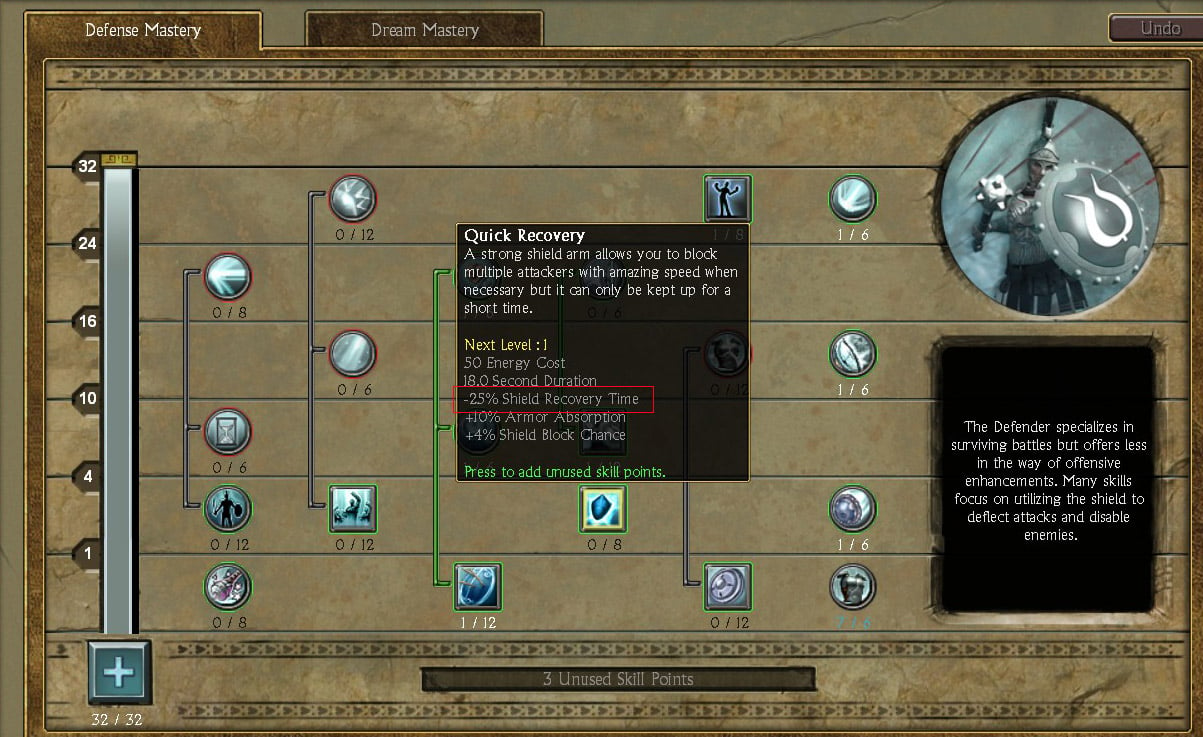 Reducing your Shield’s Recovery Time is key to making Blocking more effective. When you’re being hit by 6 enemies at once, Blocking once every 3 seconds won’t do much…

Offensive and Defensive Ability play a huge part in your character’s Build and are often overlooked by new players in favor of just straight Armor Value. In this section we’ll take a look at why these are so important and why you might want to consider paying more attention to them. Not all players need Offensive Ability, but all players can benefit from Defensive Ability.

Offensive Ability is used to calculate whether you strike your target and whether or not you do critical damage. This only applies to melee combat, so players casting spells, using Staves or using Bows do not need to worry about this stat and should not invest in it. 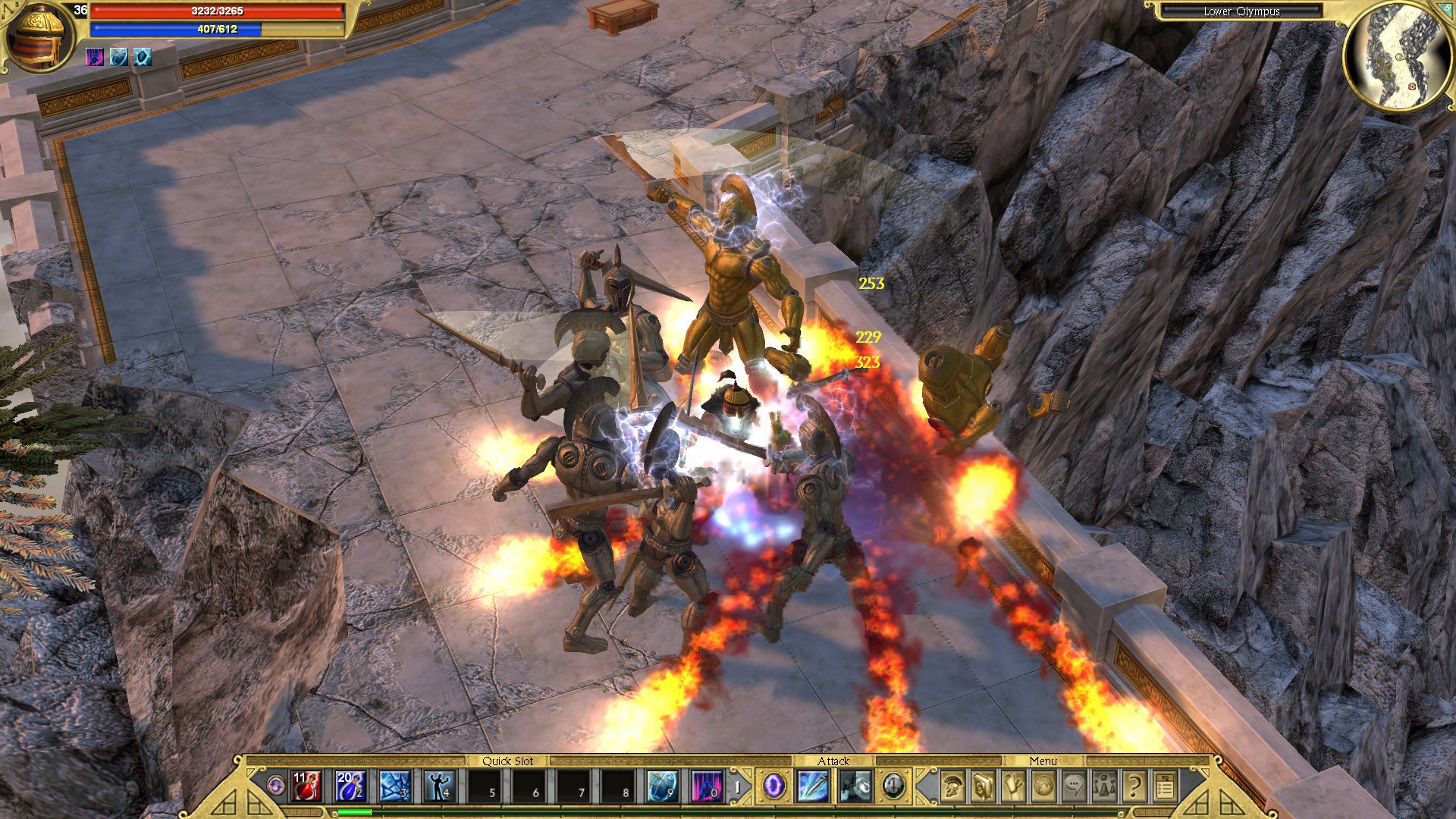 If you aren’t seeing those yellow numbers with regularity your Offensive Ability is too low.

If your Defensive Ability is too low then enemies will always connect with their strikes and will hit you for Critical Damage more often. Again this only applies to melee damage, so we’re talking about melee enemies here, and only the Physical Damage they deal. You always want your (Defensive Ability – 10) to be equal to or higher then the enemy’s Offensive Ability (preferably higher), so that you cannot be critically struck. The higher your Defensive Ability is the more often your enemies will miss, and on top of that when they do connect, it will be for reduced damage. This reduced damage is calculated before Armor and Resistances, so it is a very effective way of protecting yourself.

When making a Melee Build, be sure that you have not only sufficient Armor, but also sufficient Defensive Ability to help reduce the overall damage you take. As you progress into higher difficulties this becomes even more important and can be the difference between succeeding and failing. Ranged characters can benefit from this as well, although ideally they should not be near enough to melee units to be hit in the first place.

Attack Speed is one of the most efficient ways to increase your overall DPS in Titan Quest, and outperforms nearly everything else (if you’re a caster then the equivalent would be Recharge Time). Some of the best items in the game have high Attack Speed, and many Relics or Charms can also help to increase it via Enchanting. Keep in mind that Blue and Purple items cannot be Enchanted, but Green ones can, which is why they are often superior in some cases. 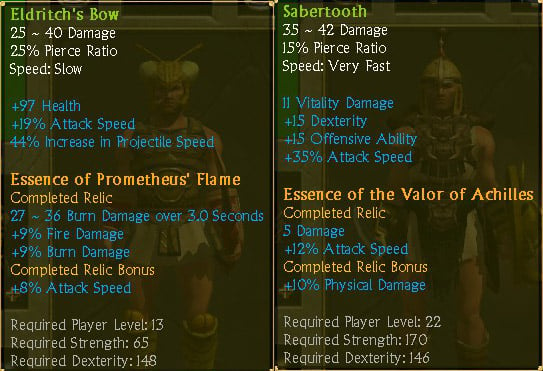 Dexterity might be the single most important Attribute in the game because not only do Weapons require a good amount of it to use, Intelligence-based Armor require a certain amount of it to be equipped. This means that every single Build will need SOME Dexterity, and is once of the reasons that nearly every Mastery in the game provides some when improving it.

Chance to Dodge and Chance to Avoid Projectiles should not be overlooked by players. Stacking these up high can make you nearly immortal (pun intended), and there are Builds that revolve completely around this. Previous versions of Titan Quest allowed you to become completely immune to damage this way, but the game has since been patched and now both of these are capped at 80%, which is still rather good. Especially considering your base Resistances get reduced with each higher difficulty, but these do not. 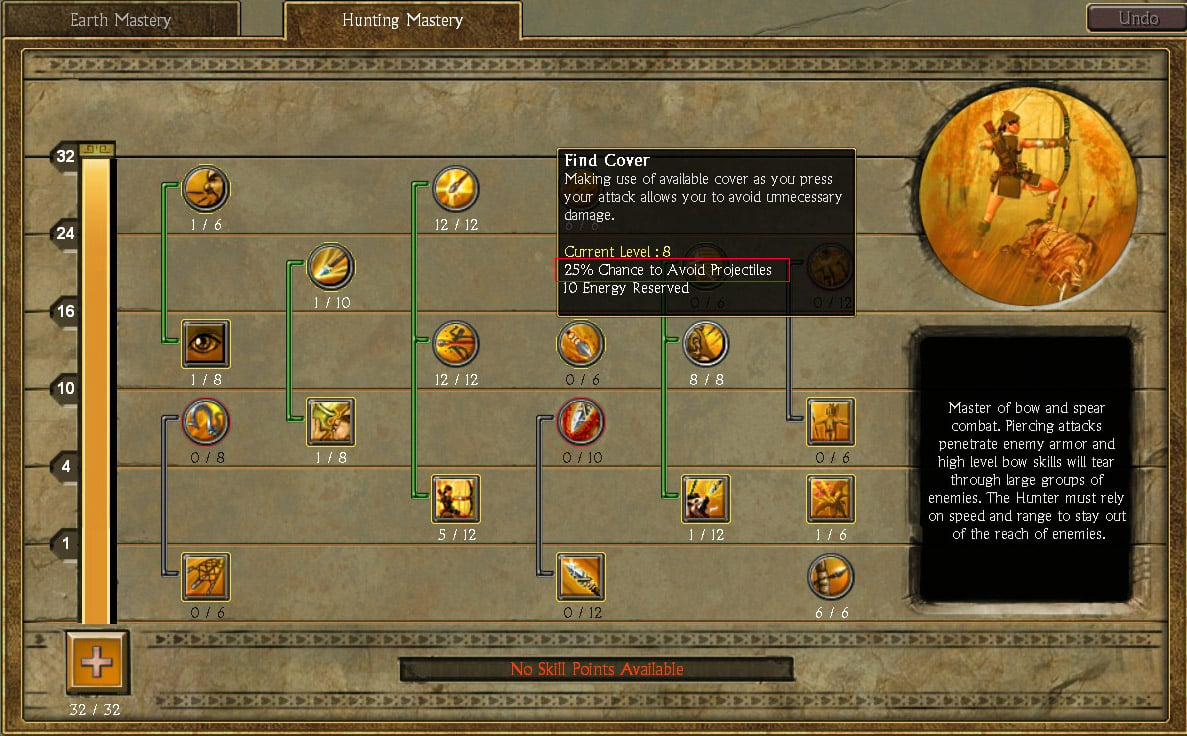 Last but not least, gear plays a HUGE role in the success or failure of your character in this game. You might have the best concept for a Build, but if you cannot find the right equipment for it, it may be underwhelming. Most Builds are viable in this game, so if you are struggling you should consider farming previous Bosses for gear until you get something that helps. You cannot breeze your way through the game without ever farming if you wish to make it all the way through Legendary.

Sources used for this article:

Stay tuned for our Titan Quest (console version) Review, and be sure to check out our other Guides!