In this Thymesia – A Bloodborne-Like Action RPG Coming Next Year (2022) Article, we’re going to take a look at the gameplay mechanics, fast-paced combat, and plague weapons of the new Action RPG developed by OverBorder Studio and published by Team17. Thymesia’s launch date was originally just days away, but has since been moved to 2022, however we’ve been lucky enough to try out the game’s beta version.

Thymesia is a Soulslike Action RPG that gives the player the freedom to execute multiple, swift attacks against brutal enemies, much like in Bloodborne. You won’t be able to block attacks either so you’ll instead survive by dodging and parrying heavy attacks. However, the game differentiates itself in terms of how chaotic encounters feel, which is reminiscent of the Devil May Cry franchise. 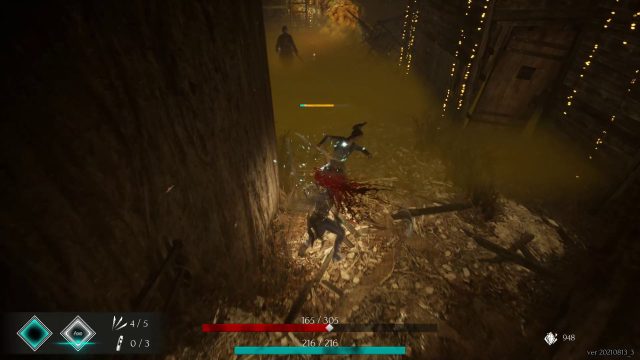 Between the initial build and the beta version, Thymesia has grown into a much better game. It now has an introduction on the current state of the world together with tutorials that help ease you into things. Additionally, the game features a more streamlined skill system in relation to the types of weapons you’ll unlock, as well as a cleaner user interface when it comes to character progression.

Thymesia is set in a once thriving kingdom that prided itself in the use of alchemy to prevent the proliferation of a plague. Antibodies had been engineered to protect soldiers against deadly diseases, leading to the kingdom’s rise to power. However, this did not last. Instead of successfully weaning the nation from its proclivity towards alchemy, the citizens themselves turned into the mutated monsters they feared, which led to a fractured realm. 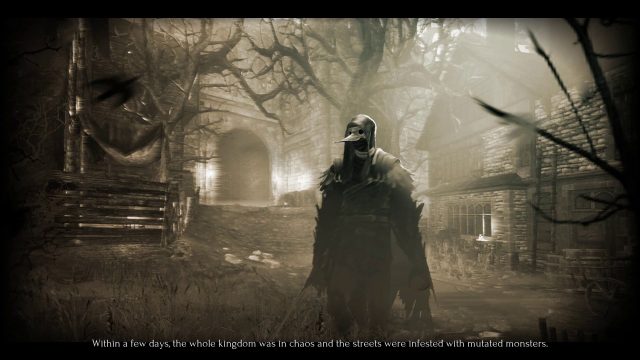 You play as the plague doctor, Corvus, who has lost his memory and is attempting to piece together the events that have led him here. The goal is to uncover the hidden truths and to put a stop to this madness while surviving and hacking and slashing the creatures that have ravaged the population. As you explore the forgotten kingdom, you’ll come across scattered notes on the ground, usually beside corpses, to help you understand how the world came to be. 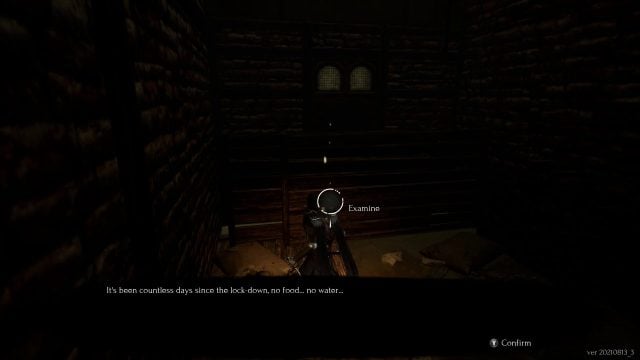 Thymesia’s art style is inspired by H.P. Lovecraft, and although Thymesia looks like a lighter version of Bloodborne, it boasts a dark atmosphere that’s gothic and rife with chaos and disease, which you’ll notice right from the very beginning. The soldiers you’ll be encountering are not as grotesque but they’re physically imposing and intimidating because of how fast their movements are compared to yours, together with how hard they hit. 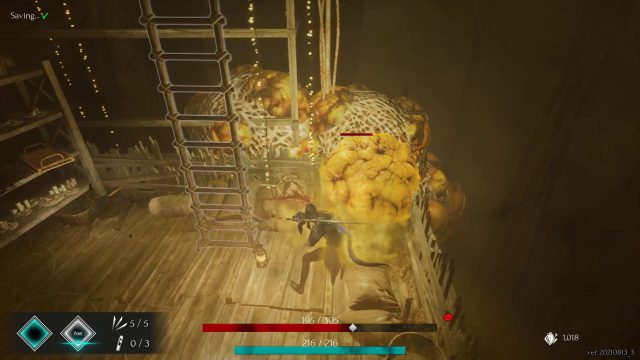 In terms of the audio, you can hear somber and oppressive music in the background, which switches to rapid and exhilarating tones when you’re engaged in combat. The sound effects are magnificent because you’ll notice the weight of the weapons and how devastating they truly are as they slash and pierce multiple enemies. Every skill sounds distinct to the one that came before, and this makes combat much more enticing to participate in.

Thymesia’s character progression is straightforward because you won’t have different classes to choose from to vary your playstyle. You’ll instead invest in attributes and talents to grow Corvus’s capabilities.

Every time you succeed in an encounter, you gain Memory Shards that serve as experience points. When you level up, you’re able to choose the attributes you intend to upgrade such as Strength to raise Physical and Plague Damage, Vitality to boost your HP, and Plague to improve your Claw Damage and MP. Note that you’re able to reset these for free.

Attributes won’t significantly impact your performance in combat unless you acquire large quantities of Shards since the status increases are minimal. So, instead you have to rely on your quick reaction times as well as the talents and weapon upgrades you unlock for the most part. 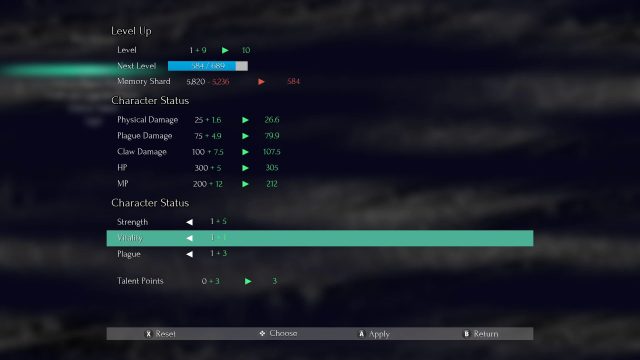 However, leveling Attributes sufficiently lets you accrue points to upgrade your Basic Combat and Raven Talents. For instance, you can interrupt the enemy’s critical attacks using your raven form’s wing rather than throwing feathers. Or you can even enter a Defense Mode to substantially reduce the damage you take when getting hit by basic attacks. There are certainly a lot of talents to check out but you’ll need to consider the playstyle you’ll be going with since you have limited points. 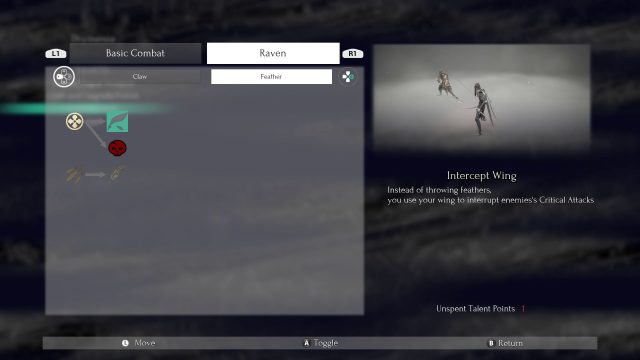 Similar to other Soulslike games, losing Memory Shards when you perish at the hands of your enemies is highly likely. Going back to your place of death lets you recover them, however, you’ll need to be careful since the creature who has beaten you will be there waiting to do so once again. Sometimes this bugs out and you can’t pick them up, so hopefully this gets fixed before the launch next year.

To understand the combat structure in Thymesia, you’ll need to utilize light attacks, dodging, deflecting or parrying, and unique features such as throwing feathers and initiating claw attacks. Light attacks and dodging are self-explanatory so I’ll discuss the three actions instead.

Parrying is an essential skill to master in order to set enemies off-balance since you’re unable to block enemy attacks, much like Bloodborne. However, you won’t be able to parry critical hits, as indicated by a red glow emanating from them. To counter this, you’ll have to throw feathers in their direction as a form of interruption, or take substantial damage. 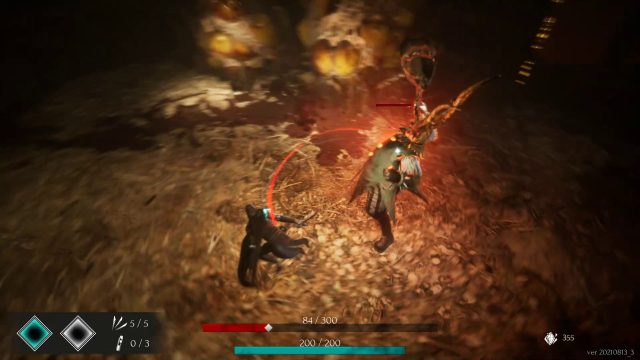 The windows for throwing feathers and Parrying are quite small, however. As such, you only have a tiny opening to react in a timely manner against enemy attacks. Initiating a deflection 1 second too early will make you susceptible to high damage whereas pressing it half a second later will result in the same thing. This necessitates a ton of practice, but it can certainly be frustrating for some players given how thoroughly precise movements should be in order to stay alive in combat a little longer.

Since you make use of your raven form, you’re able to execute heavy or claw attacks that let you plunder the blue green plague energy off of opponents before they can use it against you. Plague energy is also known as your mana, which you consume to perform skill combos such as charging towards them or sweeping those who are in front of you. 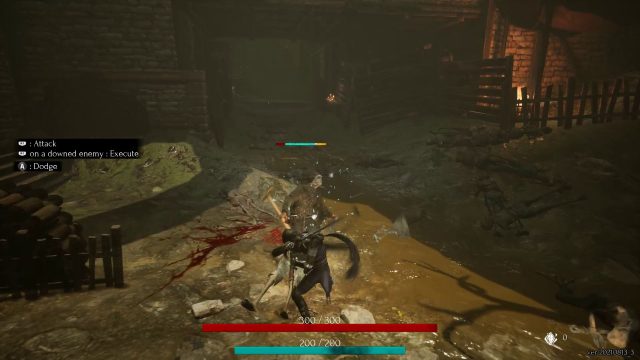 When you’ve reduced the target’s health to 0, they won’t immediately die. Instead, you’ll need to execute them by inflicting light and heavy attacks. This is one of the most satisfying aspects of the game since enemies are extremely difficult to defeat, and you feel rewarded with these animations for doing so. 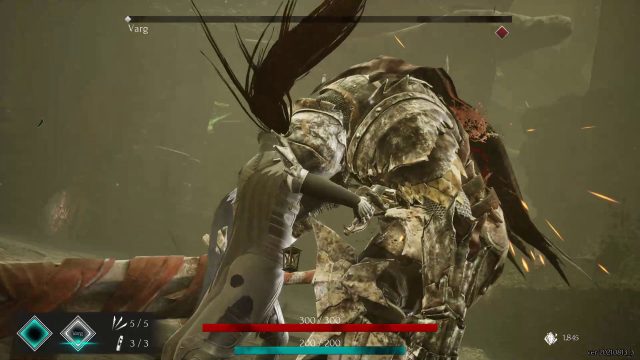 However, there is still work to be done with regards to enemy AI because there are moments where enemies will stand there and ready their weapons without engaging you. Additionally, I encountered massive framerate drops in an earlier area after a fight against the Joker miniboss. This greatly affected my light attacks, resulting in missed damage opportunities. Despite these issues after having played the beta build, combat feels fluid because of the fast-paced movements and responsive controls, when it works.

When it comes to restoring your health, you’ll be able to consume several potions, like the Estus Flasks in Dark Souls. You can also fully replenish, craft, and upgrade them at certain checkpoints. These checkpoints also allow you to level up, unlock plague weapons, enhance health potions, and gain access to perks or talents. 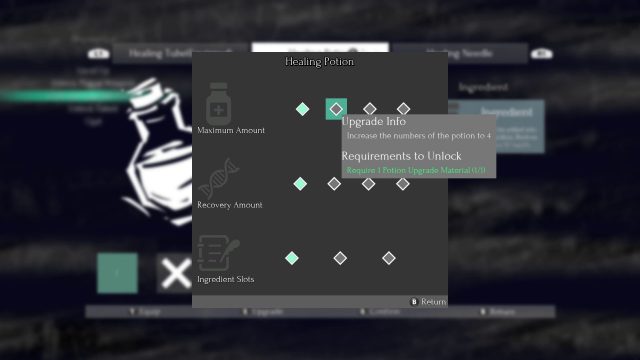 When you beat specific enemies such as the Villager Male or Female and the Joker miniboss, you’ll gain Skill Shards, which you can then use to unlock plague weapons and their corresponding actions. But for the minions, it usually takes time since the drop rates are relatively lower. For example, you’re able to unlock the Male Villager’s Axe as long as you collect 3 equivalent shards. This lets you stun your target when you perform a heavy attack against them. To upgrade this further, you’ll need 3 more shards for a total of 6. As a result, you’ll also be able to throw an axe against the same opponent. 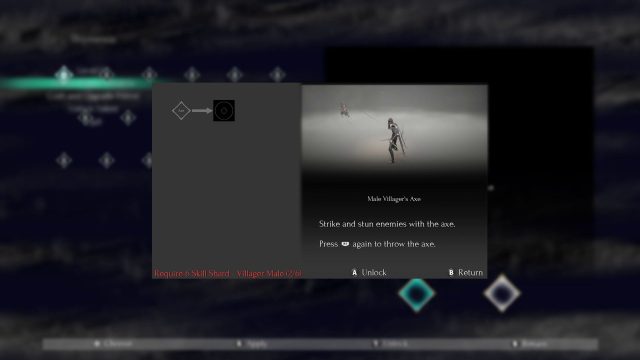 Plague Weapons are what sets Thymesia apart from other Soulslike games because it lets you weaponize the deadly disease against the same creatures who are using it to tear you down. Not only do you gain Memory Shards to improve your capabilities when defeating them, but you’re also rewarded with Skill Shards to get a hold of special weapons in order to change your playstyle as you see fit. You can equip two of these at a time.

Thymesia has a challenging combat style that should be immediately familiar to Soulslike fans. Specifically, bosses are terrifying because they can easily destroy you in one to two hits if you’re not paying attention, or make a wrong move. This, together with the haunting visuals and audio and quick, snappy movements make the game exciting to play. 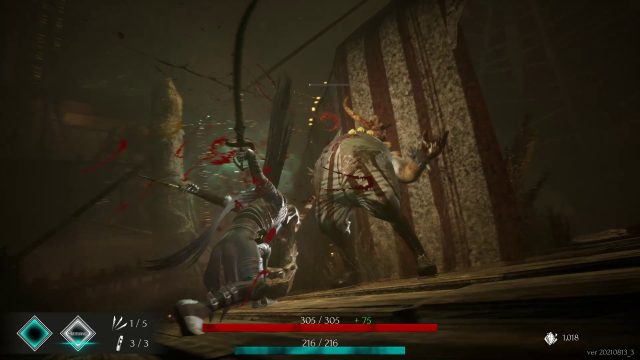 However, there are serious framerate issues, controls, which require tweaking to make them fully responsive, and the small parry and throw windows that need some adjustments before it becomes ready for the full launch. I also encountered a game-breaking bug where I couldn’t move from the checkpoint at all so I had to start my run from scratch. I’m hoping to see fixes and changes next year together with a v-sync option and FOV slider to reduce tearing and to adjust the visual field as needed.

If you’ve been itching to play another Soulslike title similar to Bloodborne, or if you’re new to the genre and you’ve been wanting to get into it for some time now, then Thymesia is a decent action RPG that you should keep your eye out for when it releases in 2022. It will be available on PC, Xbox Series X|S, and PlayStation 5.

What do you think of Thymesia so far? Will you be playing it on the first day of launch? Let us know in the comments below! Catch more hands-on impressions in our latest previews Wartales Gameplay & Features Impressions: Open-World Medieval RPG and Anvil Gameplay & Hands-On Impressions: Sci-Fi Action Roguelike Shooter.