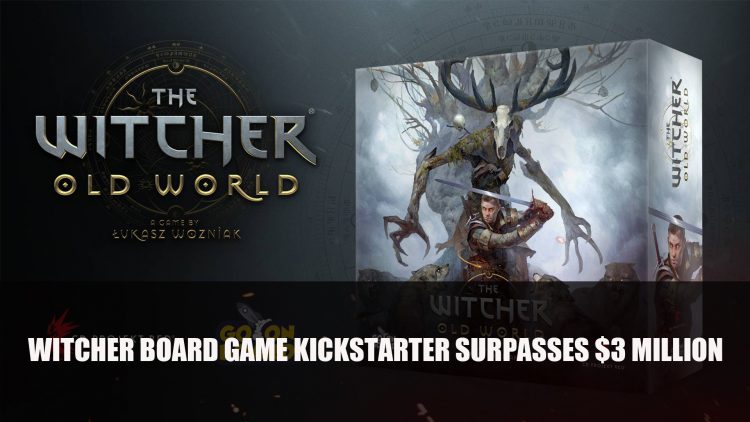 Kickstarter campaign for The Witcher: Old World Board Game has now surpassed $3 million.

The Witcher: Old World Board Game Hits $3 Million On Kickstarter

Board game publisher Go On Board who partnered with developer CD Projekt Red for the upcoming Witcher-based board game called The Witcher: Old World has now surpassed $3 million in backing. The original Kickstarter campaign which had a goal of around $300,000 has greatly exceeded this, reaching $3.2 million at the time this article was written.

The campaign which still has two weeks to go is still available for backing if you want to get in on supporting the project. It is set a few years before Geralt’s time, designed for 2 to 5 players.

Crowdfunding campaign for The Witcher: Old World board game on Kickstarter has just begun!

Everyone who backs it in the first 24 hours will receive an exclusive Mounted Eredin miniature for free!

Players will get hired to slay monsters after completing their training at one of the famous Witcher schools: Wolf, Viper, Cat, Bear, or Griffin. You will also have a chance to take on contracts, battle monsters as well as “face difficult choices”. Players will even get to battle witchers from other schools, defending the honour of their own school.

Previously The Witcher: Old World Kickstarter campaign was announced back in February this year, with the campaign kicking off on May 25th.

If you’re just jumping into the latest computer game in the series, be sure to drop by our The Witcher 3 wiki.

For more news be sure to check out next Monster Hunter Rise Shipments And Digital Sales Top 7 Million and Xbox And Bethesda Announce Joint E3 2021 Showcase For June 13th.