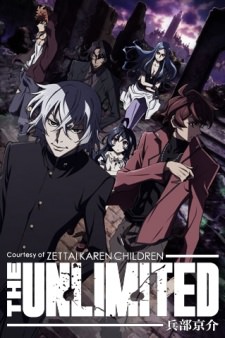 In this world there are people known as espers.  They are people with various psychic powers. Some can fly others can blow up stuff with there mind. These espers are treated as lesser people. Some examples would be not being able to enter an amusement park, or just people straight up calling them monsters. In this world there is a criminal esper group by the name P.A.N.D.R.A.  The leader of this group is one of the strongest espers alive: Hyobu Kyosuke. This is a man that fights for a future were the espers can live in peace and is willing to kill all humans to get that (kinda like magneto from x men).

The story starts out with an esper named Andy who is currently in a jail for espers. Kyosuke comes to this jail as a prisoner and is put next to Andy’s jail cell. I’m not gonna say what happens next, but Andy and Kyosuke escape jail and Kyosuke gets Andy to join P.A.N.D.R.A. The rest of the series is Andy learning about kyosuke and the other members of P.A.N.D.R.A.

I would say that the animation is pretty good in this. It was some pretty cool fights and effects, though things can get kinda bloody.

The story is pretty strong, it is a spin off series of the anime Zettai Karen Children, but you don’t need to know anything about Zettai Karen Children. I myself, didn’t even know that series existed until I saw this show. The story does a great job talking about revenge and allows you to understand Kyosuke and why he feels the way he does.

It does a decent job with the Kyosuke himself, but I wish it had done more with the side characters. I would like to know more about the other members of P.A.N.D.R.A. and what their pasts were like. It also doesn’t talk to much about Andy’s life either, though he’s one of the main characters. It is a 12 episode series so I guess that not too surprising this is the case.

I think this is a good anime to watch, it has great action and an interesting story.  It can be bloody though so if you don’t like people’s heads blowing up this isn’t for you.

5 comments on “THE UNLIMITED Hyobu Kyosuke”