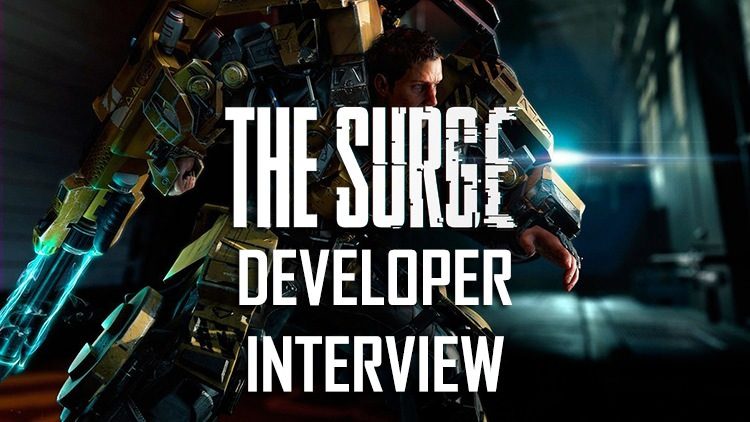 During Gamescom last year and this past E3 we witnessed first hand The Surge, a new action RPG from Deck 13, makers of Lords of the Fallen, and set to release in 2017 on PS4, Xbox One and PC. We were impressed on both occasions by the game’s combat and visual flair, awarding it our best looking game of E3. Curious to learn more, we sat down with Adam Hetenyi, Head of Game Design for The Surge during Gamescom to talk more about this sci-fi mech combat game with a distinctive Souls feel.

FL: What was the inspiration behind the Sci-Fi Mech combat setting?

Adam: So you know that we like to do RPGs, we like to do these tactical, combat oriented action RPgs. What we really wanted to do is take what we did with Lords of the Fallen and make it tight, faster, more snappy. Lords of the Fallen was definitely on the heavy side and it was kind of designed to be that way. Someone recently said it felt like you were piloting a truck around, it’s heavy and powerful feeling. We wanted to somehow get that sense of power but also be agile, swift and fast, stripping down the mechanics to make it more evasive and less blocking. We looked at other games to see how they feel.

Adam: Yeah you know, a little quickstepping and we wanted to keep it feeling really tight, really responsive but have you feel more like a stick and move character rather than walking through attacks. We wanted to make if feel tactical, so that you think about your decisions and choose your actions in order.

FL: So why the sci-fi setting?

Adam: I’ve been saying for a while now, you know what the world needs is a sci-fi Souls game. I didn’t know that Deck 13 was working on a game like this at the time, they did a really good post-mortem on Lords of the Fallen that Torsten and Jan wrote for Gamasutra and that stuck in my mind as a strong team. They know what they’re talking about, they’re open with their process and when I saw the first image of the Surge it’s a dude in an exo-suit holding a chain-sword basically. It’s a way for us to distinguish ourselves, a way to carve out a piece of the market and have our own unique art style and not necessarily go into that low fantasy which fits well for these sorts of games but also has a bunch of games already. 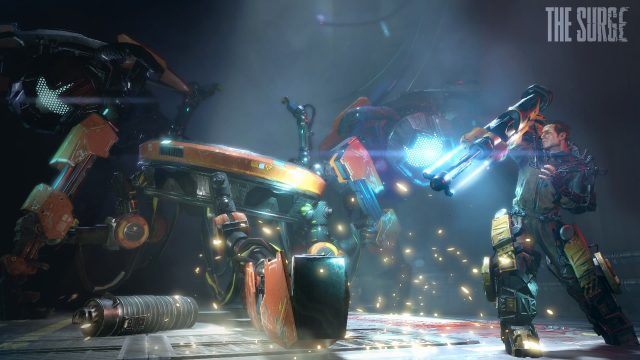 FL: We haven’t seen too much of the story yet, what’s the backdrop for your character and the world that they’re in?

Adam: The world is messed up. Ecological problems have progressed, and it’s gotten really bad. Global governments have fallen, there are failed states, the normal people are just screwed. The company that you’re an employee of is trying to fix this by putting satellites into the atmosphere. Their mission is to seed the atmosphere to heal the world’s ecology and to do this they have to invent new technology. They have to “dig too deep” in certain ways. You arrive here as just a regular guy who’s happy to have a job, but stuff goes super bad. A big part of the game is discovering bits and pieces of the scenario as you play through. It’s a bit of a mystery, they’re developing new technology to do this and like in so many stories when a group is extremely oriented and centered on achieving certain results sometimes there is a dark side to this process.

FL: Is there character creation?

FL: What stats will be present and how will they impact gameplay?

Adam: You’ll have some stats that increases your capacity to do more attacks, something that increases your health but a lot of that comes from your implants. If you are going for a more survival build you would do a combination of heavy armor and then also changing your implants to more survivability implants. The weaponry has several exposed stats like damage dealing and stagger. Right now it’s called Attack Power, but I’d like to change it to something like Impact or Force so it’s a little more explanatory. Those are the very important stats because the game is focused on combat.

FL: Is there a class system?

Adam: You can pretty much be what you want, determined by armor and implants. At the beginning of the game you do get to select a type of job that you’re hired for which roughly equates to a light, medium, heavy sort of thing. More tanky, or agile and a middle ground. Your starting set of equipment is different based on what you choose and that changes the optimal way to play.

FL: Do all weapon components have to be harvested off enemies, or can you find/craft unique ones?

Adam: That’s a good question. It’s definitely both. If you see a guy wielding a weapon you can chop his arms and get a blueprint for that weapon. The components you need to build them can be found from exploring. We’re not planning to have blueprints just sitting around in random spaces, we want to have contextually relevant situations where you can get those things but some will be found, some you’ll take from enemies if you decide you want them which I think is pretty cool and the same can go for components. There could be some rare components you can only get by killing a particular guy in a particular way or on the other hand it could be like a Titanite Slab where you have a few limited ones in specific scenarios like opening up a secret area or doing a certain thing like continue a big quest line. 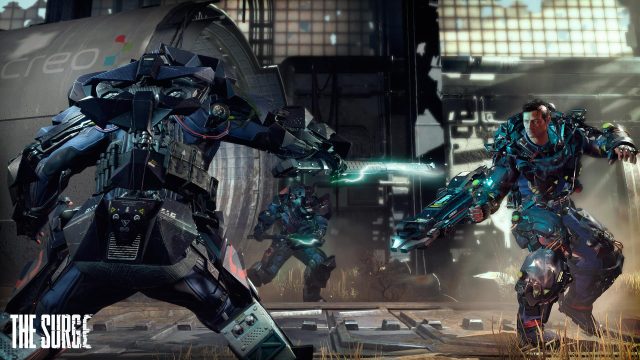 FL: How many weapons will there be and what can we expect them to do? Will there be stuff like rocket launchers, saw blades…chicken cannons?

Adam: Haha, a chicken cannon, I like that! That fits as a part of the ecological goals! So the focus is on tactical melee combat. We’re working on a ranged combat system, it’s not something we really wanted to show for the demos. It’s coming along really well but we did not want to dilute the system too much. You’ll have some unique melee weapons and you’ll have some unique ranged weapons. Maybe no chicken cannons, but things like nail guns are not out of the question, as long as it’s dystopian, industrial style stuff there is a lot of room to determine what kind of mechanics you use, how to theme them and we’re moving forward with that.

FL: How many implants can you equip at a time?

Adam: You can equip quite a few at once, but it’s defined by your core power and that’s the determining factor, not how many slots you have but how much power you have and how much you’ve leveled up. If you’re doing the equivalent of like a Level 1 Pyromancer build you’re not going to have spare power and will have to select carefully what sort of thing you’re going to use. I’m not going to promise that you can’t level up, but there will be some mechanism there for minmal level playthrough which will increase your challenge level if that’s what you’re looking for. How much you level up determines how many implants you can equip which is a direct correlation with how many stats you’ve given yourself, energy generation, how many tricks are in your bag in terms of ejectibles.

FL: Does your effectiveness using the targeting system improve as you progress?

Adam: For humanoids you can always target all the body parts, but which parts are armored will change throughout the game. Early on you’ll find enemies with fewer armor pieces making it easier to select unarmored parts to do more damage or stagger. Later on they will have less armor and weakpoints and you won’t be able to easily stagger them. We prefer it to be like awareness so you don’t grow more aware of their body throughout the game. Complex robots have more target points so you can experiment with different parts. It comes down to player experience to find what is the weak and strong points and what can be taken off.

FL: We know that armor can be mixed and matched, beyond defense are there any attributes that would make you choose one over another?

Adam: Yeah, some of them increase the damage you’re dealing, so if you have heavy exo on your arms it makes you more forceful. Besides that many armors have environmental effects. For example one armor turns on bright lights, a helmet that does the same thing. The game will also have environmental hazards like gas, and depending on the type of armor you have, you’ll get protection from it or mitigate its effects in some capacity. There’s going to be a lot of mixing and matching of these effects depending on the scenario you’re getting into.

FL: Is there a trade off to mixing and matching armor? Do you have to make compromises in other slots such as equip burden?

Adam: There is not a strong equip burden other than core power, so they all feed into that same power system but the difference is if you were to compare equip weight and carrying capacity of Lords of the Fallen to this you just can’t go over. You can go up to a certain core power and no more and that’s part of your choice. Some uses more core power, some uses less. You could potentially use a low power set of armor but use implants as a balance. You could find the perfect balance of most defensive armor and implants or vice versa, and you can ideally feel that difference.

FL: Lords of the Fallen had bonuses for equipping a full armor set, will that be present here?

Adam: I’d like to do that but I don’t know if we will be able to. It adds a lot of depth to have that cross synergy. 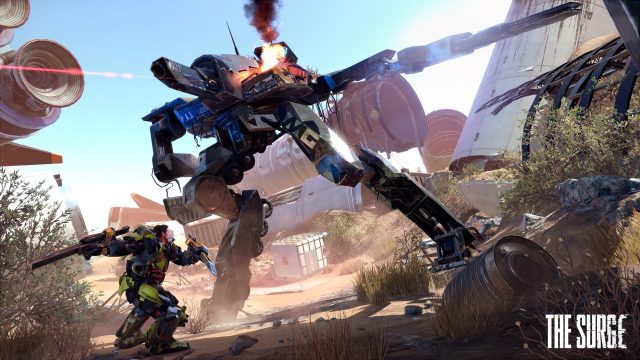 FL: Can you change color schemes of the armor?

Adam: Right now we don’t have a dyeing system planned, but it’s a time budget like to have. We can’t do everything we want to do, we have to make choices.

FL: What is the world structure like? Open world or similar to Lords of the Fallen?

Adam: The term we use a lot is Metroidvania. The levels are interconnected in a lot of ways and you’ll come across areas you can’t access the first time you come along where your core power is not high enough, you don’t have the right exo-suit, the right security clearance, etc. Sometimes they will be optional areas, sometimes they will be places you have to come back to. But we want to make sure you have a lot of reasons to explore, and backtrack and makes sure those are always rewarding moments.

FL: Are there any plans for multiplayer? It looks like it would have fantastic PvP!

Adam: Right now it’s not and I know that’s sad. That’s something we’d really like to do in the future as it adds a lot of longevity and competition so believe me when I say I feel you, but it’s not something in the cards right now.

Keep checking with us for news and articles on The Surge both here and on the The Surge Wiki as it progresses in development towards its 2017 release!