Even if The Outer Worlds will be a very familiar game to many players, those particularly that have spent time in any of the recent Fallout games. This Outer Worlds Getting Started Guide is aimed to inform you about a few things that might help you get off to a better start so that you don’t have to get 5 hours in, and then begin again like I did. This is the “things you should know before you play” Guide, and in it I’ll cover things that will simply make your first play through a bit more efficient, with little to no spoilers.

The first thing I’m going to cover here is a couple of Skills that really really help out early on, and why I strongly advise getting them to 20 as quickly as you can. And those are Lockpicking, Science and Engineering.

The reason it is advised you get these to 20 is because Locks in The Outer Worlds usually require a varying amount of Mag-Picks to open, and these are a finite resource. However, once you hit 20 in Lockpicking any Lock that only requires 1 Mag-Pic can be opened for free, without consuming the Mag-Pic. There are quite a few Locks like this, so this comes in extremely handy, saving those Mag-Pics for the harder locks.

Getting Science to 20 means that you can improve your Weapons and Armor at a Workbench via the Tinker feature. There is literally no other way to do this, so unless you never want to improve your equipment, you’re going to get to 20 Science eventually. I suggest doing it sooner rather than later, particularly if you’re playing on harder difficulties.

Engineering is great to get to 20 as well because it allows you to repair your equipment in the field. Since your gear will lose Durability from attacking and taking damage, it can be a big hassle to have to head to the nearest Workbench when you’re in the middle of No Man’s Sky…er Land. Additionally, there are quite a few early game skill checks that use Engineering, so it’s not bad to have. 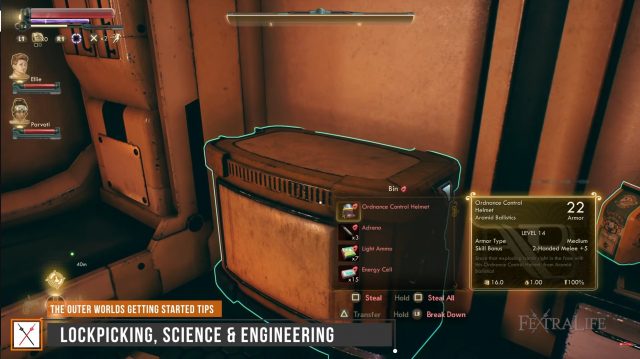 One of the really cool things about The Outer Worlds is that there is literally loot stashed everywhere. Just about anywhere you can think of that there could be something hidden for you to find, there is. This never changes through out the game, so I very much encourage you to explore. Look under stairs, behind boxes, go outside and jump onto the roofs of buildings. There is loot everywhere, so go out and get it! 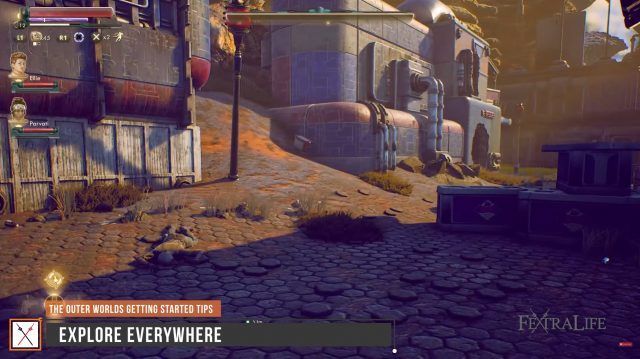 Stealing & What It Means

You can steal items in The Outer Worlds with zero repercussions as long as you are not seen. It does not lower your reputation in anyway, and items you steal are not marked “stolen” in your inventory, so steal as much as you can when you can! There are a lot of good things you can get early on that will help you if you decide to take the route of a thief! 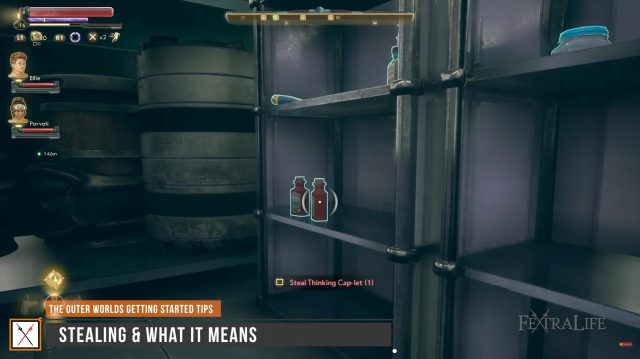 Just about every quest you do in the game will give you positive or negative reputation with one or more factions. What’s important to note here, is that while reputation does have an overall impact on how some people treat you, specifically the value needed to pass a skill check, you can have maximum positive and negative reputation for a faction at the same time. Reputation also seems to impact the amount of XP, and money you gain from helping people in a region, so keep these things in mind before deciding how you want to handle each situation. And, if you can’t seem to pass a skill check, perhaps you need to go raise your reputation before trying again. 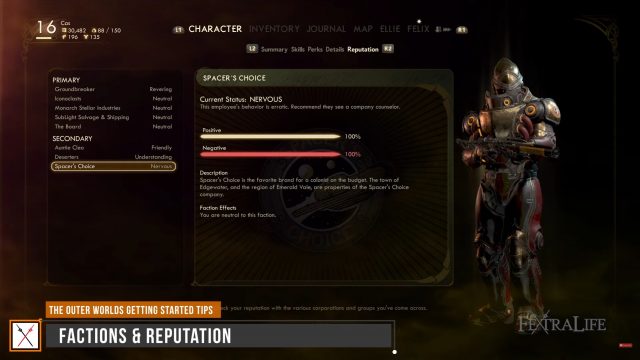 You can respec your character at any time aboard your ship for the cost of 500 Bit Cartridges. This cost will double each time you decide to respec, so keep that in mind before doing so, and plan accordingly. Additionally, only your Skill Points and your Perks will reset, not your Attributes. This means if you invested heavily into a melee sort of character Attribute wise and now wish to play a sniper, you will likely have to start a new game to attain an optimal setup. For those min/maxers out there, it’s best to treat the respec as if it didn’t exist for this reason.

Companions are also Respeced when you are, though all you can do is reassign their Perk Points, which they have very few of. Still it’s nice to know that they can be as well, and that it is tied to your own Respec. 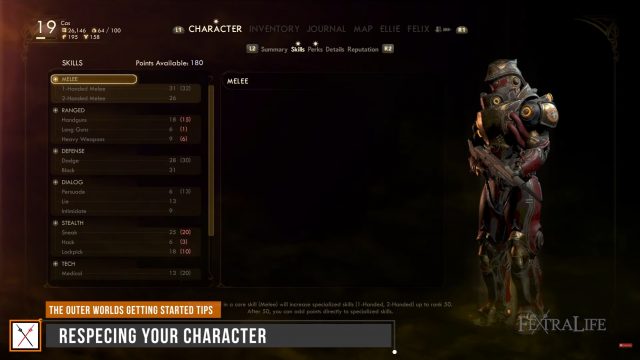 One of the more challenging aspects of The Outer Worlds is managing the weight of your inventory. One really great way to do this, is by storing things you don’t need in the container in the captain’s quarters aboard your ship. This gives you a place to dump things you may want later, like Mods, until you can decide what to do with them. Save it. Store it. Shoot people with it later! 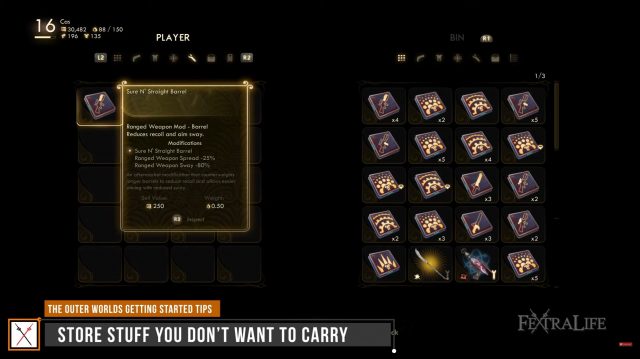 Talk to Everyone, Read Everything

Many Quests in The Outer Worlds can be obtained or objectives added/changed by speaking with people or reading information on terminals. For this reason it’s wise to exhaust all dialogue options when speaking to anyone, and to read every entry on terminals. If you don’t want to have to read all of that, you can skip through it on terminals or press “O” on Playsation or “B” on Xbox to skip forward during conversations with people. 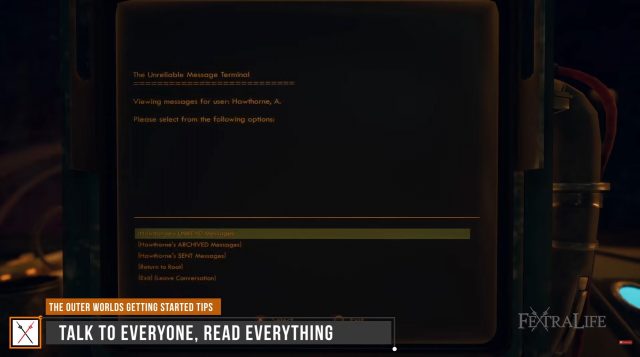 By default The Outer Worlds is set to show you the base stats of your Weapons and Armor, not what they are when they are affected by your Attributes, Skills and Perks. This means that some weapons may be much better for you than what you are using, but you might not be able to see that visually. It’s strongly advised that you untick this box, so that you can see the impact your character build is having on your weapon selection. Maybe there is a better choice of weapon and you just don’t know it! 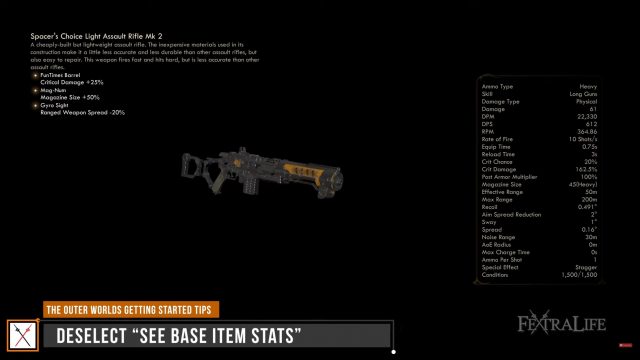 Players will gain a Perk every two levels, or every time they gain a Flaw. Flaws occur when certain conditions are met, and can be accepted by the player. Players who accept these Flaws will gain 1 Perk Point in exchange, but be warned, these Flaws are permanent and some of them are very very bad. Not all Flaws are equal so make sure you read the description of it before you decide to accept it, because you’ll have to live with that decision. 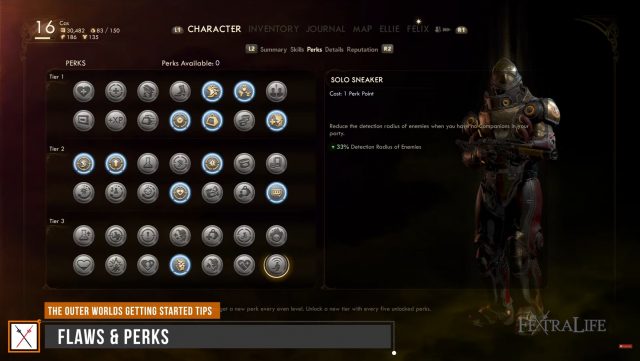 Lastly, Pickpocketing is straight up broken in The Outer Worlds. It requires some investment into Sneaking, but once you have it you can Pickpocket just about anyone and take EVERYTHING displayed, and you don’t lose any Reputation for doing so. And, you can repeat it over and over, meaning if you get interrupted or you accidentally press the wrong button, you just Pickpocket again. This can often bypass harder or more lengthy quest objectives, and will net you tons of cash. 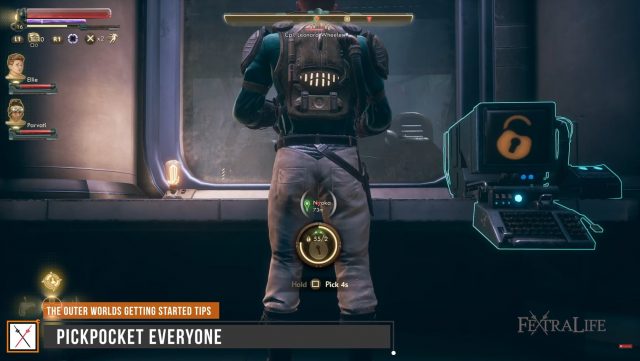 Stay Tuned for more The Outer Worlds content through out October, and be sure to check out our Outer Worlds Review to see what we think of the game!