In this Outer Worlds Build Guide I’m going to be covering the Universal Scientist, which is a Build that focuses on using the Science Weapons of the game to devastating effects. There are several ways you can make an effective Build in The Outer Worlds and the Universal Scientist is one of them. If you’ve been looking for a Build that uses Science Weapons, this Guide is for you.

The Universal Scientist can use any weapon type in The Outer Worlds, because it specializes in Science Weapons and there is one of each type. This means you will need to spread points out a bit in order to use them all effectively, but you can also respec and specialize in one type of weapon if you find one that you really like. Spoiler alert you definitely will, and I know which one.

The best place to begin with any Build is Attributes, because these cannot be respeced, so this decision is permanent. When making a Build that revolves around using every weapon type in the game, you want to focus on Attributes that are going to increase your damage with each one, as well as those that will keep you alive. The best way to do that is by placing points into Intelligence and Strength.

Intelligence will increase your overall Critical Damage with any type of Weapon, making it the best possible Attribute for a Build that uses multiple weapon types, like this one. Strength will increase your melee damage, and we take this one because there is really only one other Attribute that boosts per hit damage and that is Perception. However, at the time of this video I have not found a single Science Weapon that would make very good use of it, and, the best Science Weapon in the game is a melee weapon. 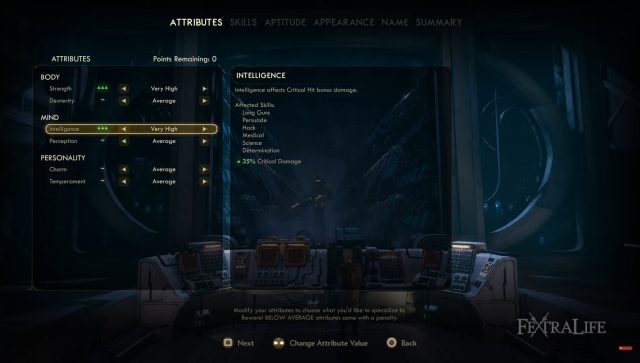 There are a handful of important Skills for this Build, but the most obviously important one is Science. Not only will this passively increase the damage of many of the Science Weapons, it will make their effects more impressive, as well as make it extremely cheap to Tinker them. You will need to Tinker these Weapons often to get them to do increased damage, so that will save you a ton of Bit Cartridges. Needless to say you want to focus heavily on Science early on, and you want to max this one out first.

Besides Science you’ll want to invest into Ranged and Melee in order to get these Skills to around 60 Each. 60 is a great point for Melee and a decent point for Ranged Weapons. If there is a one type of weapon you like more than the others you can take that skill up to 100. Any other Skill Points can be spent however you wish, as that is all that is really needed to complete the Build. 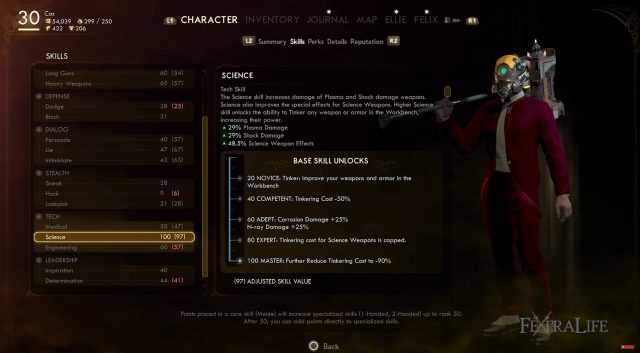 Perks are generally not super important when it comes to Builds in The Outer Worlds, but they are when you are making one that revolves around Science Weapons. In this section we’ll take a look at which those are, and how they help you get the most damage out of all you Science Weapons without gimping yourself too hard.

Toughness – This Perk boosts your Health by 50%, which is not a small amount. This is just an all around good Perk for any Build.

High Maintenance – Another all around great Perk, this will prevent your Durability from decaying as quickly. It’s a pain in the ass to constantly repair, and this will make it so you don’t have to do it quite as much.

Weird Science – This Perk increases the damage of your Science Weapons by 50% which is astronomical (pardon the pun)! Get this one as soon as you reach Tier 2.

Harvester – This Perk is another one that is just all around great for any Build. Who doesn’t love gaining Health for killing things they were going to kill any way?

Wild Science – Further boosts your Science Weapon damage by another 50%, bringing the total up to a 100% damage increase with these weapon types. This one is a must have.

Confidence – This is an excellent Perk to have in general, but especially when combined with Prismatic Hammer or the Gloop Gun which have high damage per shot. Be sure to grab this one.

Armor Master – A great Perk for boosting Armor and making the passive Skills you gain from them even more effective. Another great all around Perk.

Revenge – A Perk that increases damage when you gain a negative Status Effect. You won’t need this one all the time, but it’s a good way to improve damage now and then.

Tit For Tat – This is a great Perk if you find yourself using either of the melee weapons often. Extra healing is always good.

Penetrating Shots – If you find yourself using the Shrink Ray or the Mind Control Ray often then consider picking up this Perk. They hit the target repeatedly and can benefit from reduced Armor of the target. 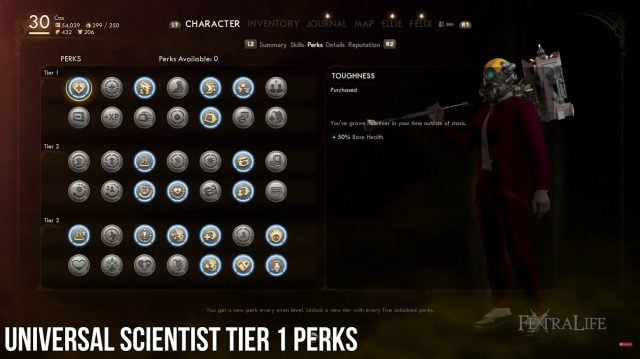 Weapons are the focus of this Build, more specifically Science Weapons. In this section I’ll talk about each, and go over how they work and why you might use them. You will gain these Weapons during the Quest Weapons From the Void, which is a rather lengthy quest, meaning you will not get some of these until later in the game. Let’s start with the Shrink Ray because it’s the first one you get.

Holding down R2 on an enemy when using the Shrink Ray, will shrink their size while simultaneously dealing damage to them over time. While it looks cool, the shrinking effect is not overly useful, especially later on in the game. The gun deals significant damage though, even if the range is quite short.

The Mandibular Rearranger is a one-handed melee Science Weapon that freezes targets on every third strike. This is much more useful on harder difficulties than lower ones, because you usually kill most things in that many hits anyhow, so stunning them becomes a bit redundant.

The most powerful weapon in the game, the Prismatic Hammer is likely to get nerfed. It’s regular swing hits hard, but it’s charged R2 attack is devastating. It unleashes a colorful attack wave in a straight line, destroying everything in its path in a single swing. This attack can hit for over 15k easily, which is about ten times higher than any other Weapon I’ve tested. Even if it does get nerfed, it’s still likely to be powerful.

The Gloop Gun fires much like a Plasma Launcher dealing high single target damage in an aoe that can raise enemies into the air, if they don’t die first. It’s very good against large groups of enemies, and is good in tight quarters.

The Mind Control Ray forces the target to attack other enemies while you hold R2. It also does damage over time, often killing the target before it ever has a chance to do anything noteworthy.

None of these weapons can be Modded, unfortunately, so there is no real need to discuss that. There may be other Science Weapons in the game that I have not found, but there shouldn’t be many more if there are. 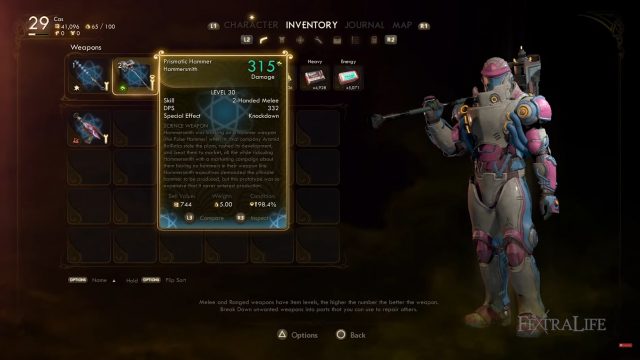 Armor-wise you can use anything you wish, but there is a decent helmet that increases both N-ray and Plasma damage called the SugarOps Helmet that is worth using here. Be sure to keep your Armor values high because 2 of the weapons are melee, and another 2 need to have direct line of site with the enemy to be effective. This means you will take damage, and you’ll want to minimize the amount you take.

You will likely try all these weapons and come to the conclusion that you like to use one or two more than others. You can respec at this point, allowing you to free up some Skill Points to be used on other things like Leadership, Dialogue or Stealth if you wish. Don’t wait any longer than you need to, and do it when you have a favorite.

You won’t have many of these weapons until mid game so you will need to use something earlier on until you do. It doesn’t really matter which type of Weapon you use, and it’s up to you to decide what style of play you enjoy most. Just make sure that whatever it is, it has Shock or Plasma damage so that you gain the passive boost from Science. Mod them if you have to.

Tinker the living bejesus out of your Science Weapons to increase their damage. The 80 Skill Point benefit in Science caps the cost to Tinker at 200 Bit Cartridges, which is nothing mid to late game. If you don’t Tinker them up to high levels then they will do pathetic damage when you find them. Be sure to do this!

Vicar Max is an excellent Companion to use for this Build because he can further boost Science Weapon damage by 20% via his Perk: Mad Max. That is a significant amount. You might not need it, but if you’re planning on using Companions, consider using him.

Lastly, use the Wiki to find the fastest way to get these Weapons so you can complete this Build ASAP. All of their locations should be on there, but if you’re having trouble finding them, look for the Weapons From the Void quest. This will tell you how to get them all.