In this Outer Worlds Build Guide I’m going to be covering the Time Sniper, which is a Build that focuses on eliminating enemies from range, before they even know you are there. There are several ways you can make an effective Build in The Outer Worlds and the Time Sniper is one of them. If you’ve been looking for a long range Build, this Guide is for you.

The Time Sniper Build uses a combination of Long Guns and liberal use of Tactical Time Dilation to make short work of its enemies. In fact you often kill enemies in a single shot, allowing you to take down multiple enemies before you’ve spent even one clip. And that can occur before any of them realize you are even there. In this Guide we’ll show you how to make a long range sniper with maximum efficiency in The Outer Worlds. 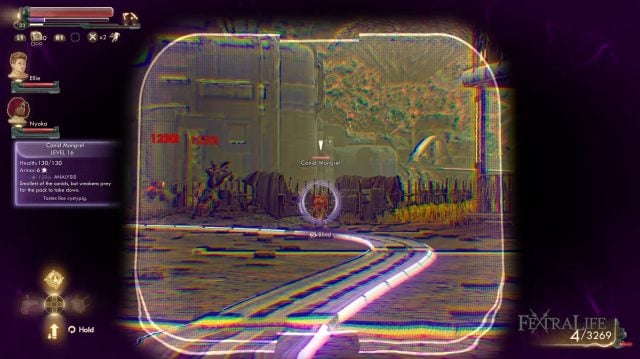 The best place to begin with any Build is Attributes, because these cannot be respeced, so this decision is permanent. When making a sniper Build you want to focus on Attributes that are going to increase your damage with each shot, and the best way to do that is to maximize Intelligence and Perception.

Intelligence will increase your Critical Damage, and you will have a very high Critical Chance from your Long Guns Skill. Perception will increase your Headshot/Weakspot damage, and since you’ll always be aiming for these parts, that works out well. Maxing these two Attributes will give you the highest potential per shot damage in the game, and if damage is what you’re focused on this is the best way to get it. 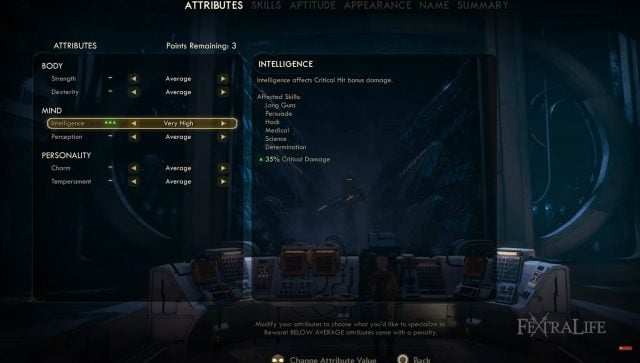 There are really only 3 Skills we are interested in for this Build, though you will likely use others for Dialogue reasons or what have you. Long Guns, Sneak and Science are these Skills and I’ll explain why they are great for this Build.

Long Guns will increase your Crit Chance with Long Guns for every point you place into it. Additionally, at 40 you will gain an additional 50% Critical Damage with these types of Weapons. At 60 you will gain a further 20% Headshot/Weakspot Damage, and at 100 Critical Hits will ignore Armor.

Sneak passively increases your damage while Sneaking once you reach 20, and the amount of extra damage will continue to increase as your Sneak Skill increases. At 80 you will deal an extra 20% Damage when sneaking on top of what you already do, and at 100 Sneak attacks will ignore 50% of the target’s Armor. Sneak Attacks are excellent at taking out the hardest to kill targets first, so figure out which these are and Sneak Attack away!

Science passively increases your damage with Plasma and Shock Damage, meaning if you use a Mod to make your Weapon either of these two types of damage, you’ll do more damage immediately. At 20 you can improve your Weapon further for more damage, and at 60 you will gain increased damage with Corrosion and N-ray Damage. Use any of these damage types for best results with this Build. 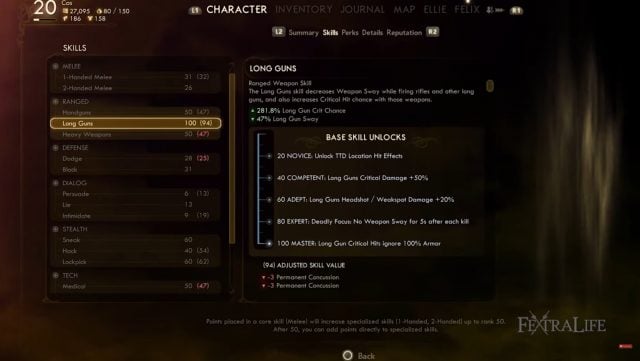 Perks are not super important when it comes to Builds in The Outer Worlds, but there are some that are more effective than others for the Time Sniper. In this section we’ll take a look at which those are, and how they help you get the most per shot damage.

As you can see there are only 8 Perks listed here, and 2 of them are optional, and 1 is not a must have. This means that you will need to spend Perk Points elsewhere in order to unlock the later Tiers of Perks. How you wish to spend these is up to you. I discourage you from taking Flaws to gain more Perk Points, as they are not usually worth it. 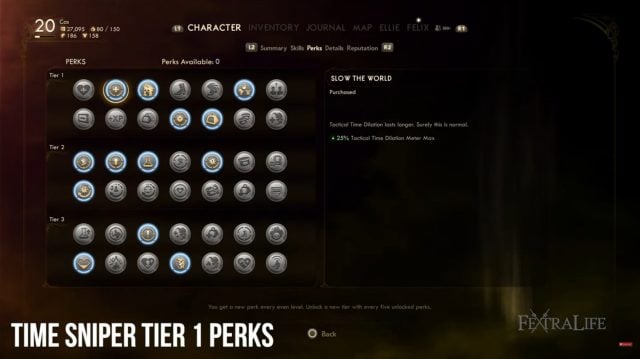 Time Snipers use Long Guns, and more specifically ones that have a slower rate of fire and deal high per shot damage. This means you will not be using Assault Rifles, but instead something like a Plasma Rifle or a Hunting Rifle. Any Long Gun works, as long as it has high per shot damage.

Be sure to Mod your Weapon so that it is the most effective it can be. I like to use the Whisper Quiet Muzzler, as it reduces noise, allowing you to kill things without alerting many other enemies. Make sure you have a good Scope as well, Exact-O-Sight is probably your best bet. And, make sure to slot a mag that changes the gun’s damage type to Plasma or Shock early on, for even more damage. Corrosive or N-ray are fine later on.

Armor-wise you can really use anything you want. I’d stay away from Heavy Armor though, since it generally penalizes Stealth. Hunter Kit is a good Mod to improve your Ranged Weapons, and the Nightingale Step Mod is good for reducing the sound you make while moving. 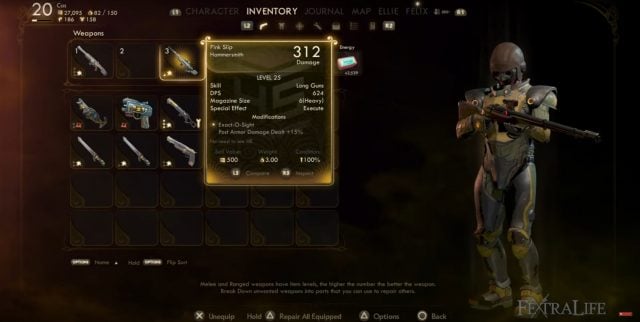 Early one you’re going to want to get Sneak, Science and Long Guns all to 20 as quickly as possible to gain their benefits. From that point onward you want to get Long Guns to 40 for the increased Critical Damage. Then I recommend taking Long Guns to 60 before focusing on Sneak and Science. You can do this in whatever order you like, and that is up to your preference.

If you find that you are falling behind damage-wise and aren’t able to one shot most enemies, look for a new Weapon or Tinker it up even higher. You need to change your Weapon somewhat regularly in The Outer Worlds to stay ahead of the curve, so keep your eyes out and switch when you can. It is also usually cheaper then Tinkering a lower level Weapon up many levels.

Stock up on the Mods you know you’ll need for this Build because you cannot remove them once slotted. This means you will need to outfit your new Rifle and Armor with the same Mods you had before, or they will be less effective than what you currently have. Spend your money on Mods, and make sure you always have enough for when you need to upgrade your Weapon and Armor.

Though this Build is designed for long range shots, you won’t always be able to fight at this distance. For this reason I advise keeping an Assault Rifle or Shotgun as well, because these weapons will benefit from many of the Skills and Perks we use for a sniper build anyway. Options are always good!

Lastly, there are some brilliant Unique Rifles in The Outer Worlds so be on the look out for them. I really like using the Pink Slip for high damage, and relatively fast firing for the type of range you get, but there are other good ones as well. Use the Wiki to find them and get them ASAP!