In this Outer Worlds Build Guide I’m going to be covering the Space Cowboy, which is a Build that focuses on the use of Handguns to dispatch large groups of enemies quickly from close or mid range. There are several ways you can make an effective Build in The Outer Worlds and the Space Cowboy is one of them. If you’ve been looking for a Pistol Build, this Guide is for you.

The Space Cowboy uses a combination of different Pistols to blast their way through enemies, no matter what the type are. Pistols are the perfect blend between close and long range because they have fast reload, can deal nearly the same damage as sniper rifles in some cases, and can attack nearly as fast as Assault Rifles dealing more damage in other cases. In short, there is a pistol out there for every situation, and this Build makes the best use of them all. 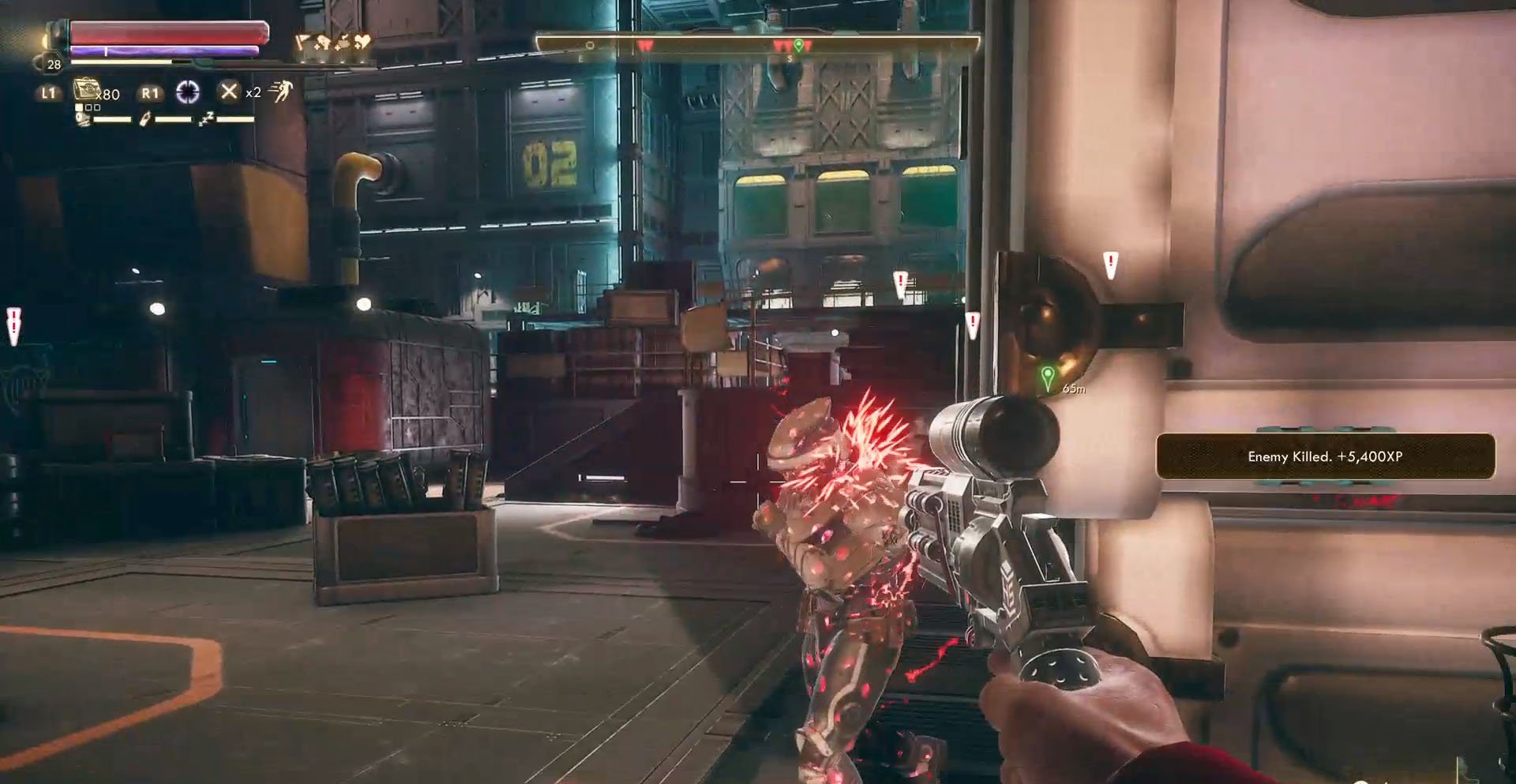 The best place to begin with any Build is Attributes, because these cannot be respeced, so this decision is permanent. When making a Pistol Build you want to focus on Attributes that are going to increase your damage with each shot, as well as make you reload faster, and the best way to do that is by taking Intelligence, Perception, and Dexterity. In order to get 3 Dexterity, 3 Perception and 2 Intelligence you’ll need to drop a point from Strength and one from Temperament. 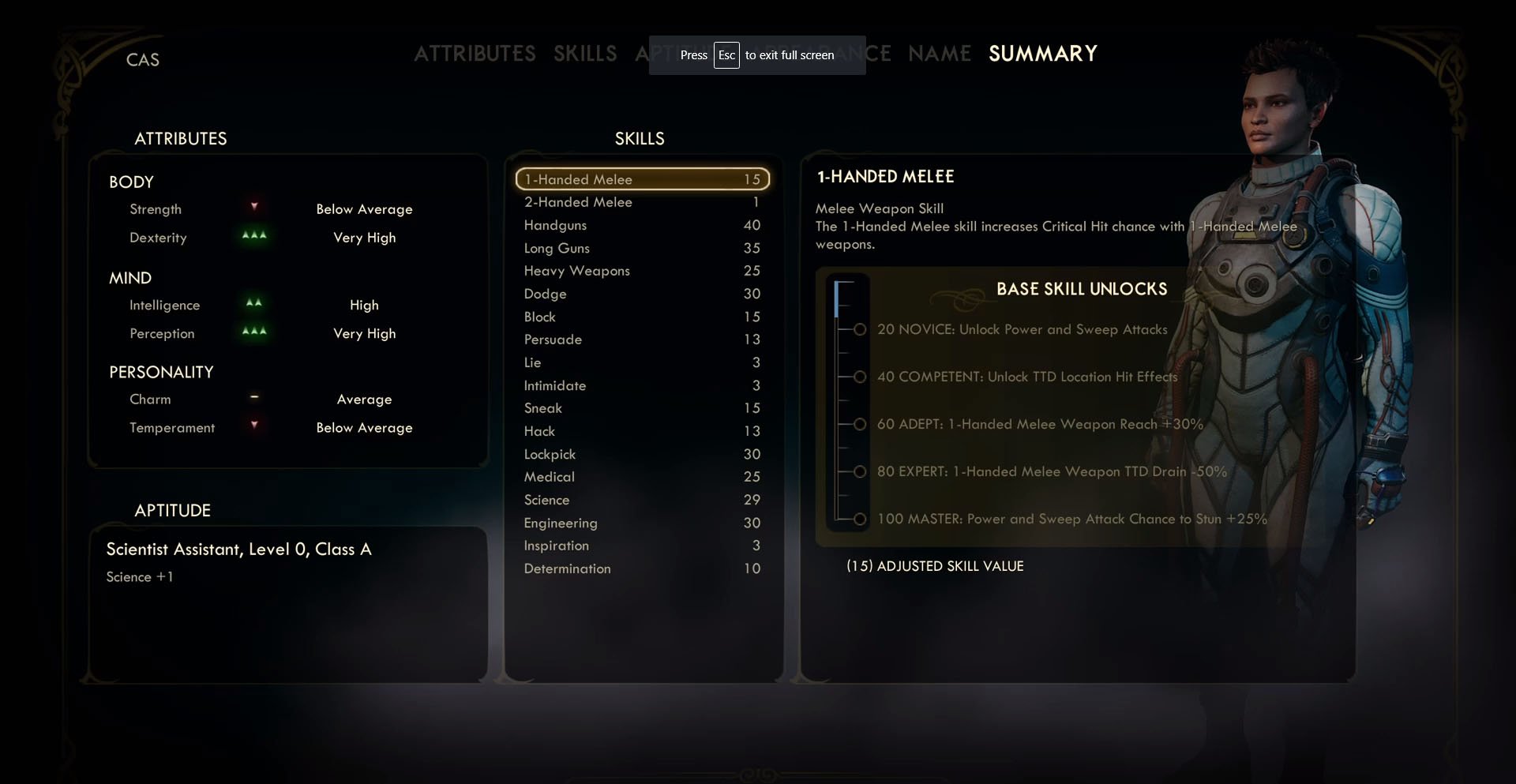 Intelligence is used for the extra Critical Damage and Science. Not every shot you fire will hit the Weakspot of an enemy, and this will help boost your damage when you don’t hit these areas.

Dexterity boosts your Reload Speed, which is great since Pistols already have a modestly fast reload, giving you almost zero down time between shots. It also helps with points into Handguns, which is an added bonus.

There are only a couple of skills we are focused on for this Build, and those are: Handguns and Science. Handguns is what is going to allow you to really crank out the damage with your shots, increasing Critical Chance, Armor Penetration and Critical Damage. Science boosts non-physical damage, and makes it much easier to Tinker your Guns to higher levels, and since you’ll be using several this really helps out. Make sure to slot Magazines that change your guns’ types to something other than Physical Damage. 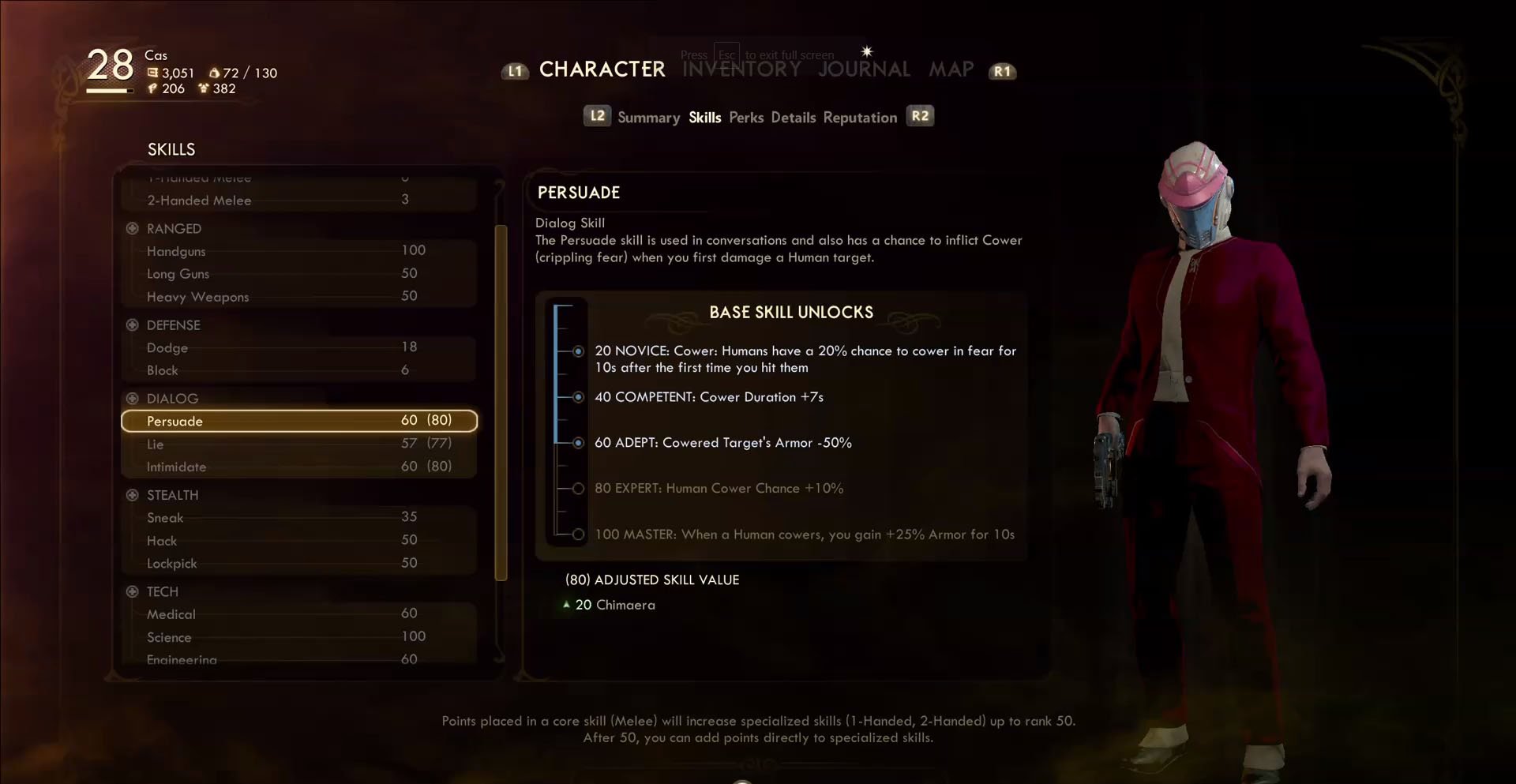 I highly recommend spending your other Skill Points in Dialog Skills because they will reduce Vendor prices and you will need to purchase a few guns for this Build, and possibly even some Mods. This will help ease this burden, giving your more Bits to Tinker your Weapons with.

Perks are not super important when it comes to Builds in The Outer Worlds, but there are some that are more effective than others for the Space Cowboy. In this section we’ll take a look at which those are, and how they help you get the most per shot damage.

If you decide to use the Shrink Ray as one of your Weapons for this Build, be sure to include Weird Science and Wild Science for further improved damage. It may also be wise to spend extra Perk points on The Negotiator and Snake Oil Salesman in order to gain some more cash. You’ll need to upgrade many Pistols for this Build and you’ll need a lot of Bits to do it, so these Perks can really help out.

Space Cowboys use a combination of different Pistols, because there are many good ones, and there’s no reason to limit them to just one. The following are some really good Pistols you should consider using, making sure to have different Pistols with different types of damage.

Armor wise you can use whatever you want as long as it’s enough armor to keep you alive, but you’ll want to use the Certified Explorers Hat for increased Perception. Plus, it makes you look like a Cowboy, and you can’t be a Space Cowboy without looking like one! 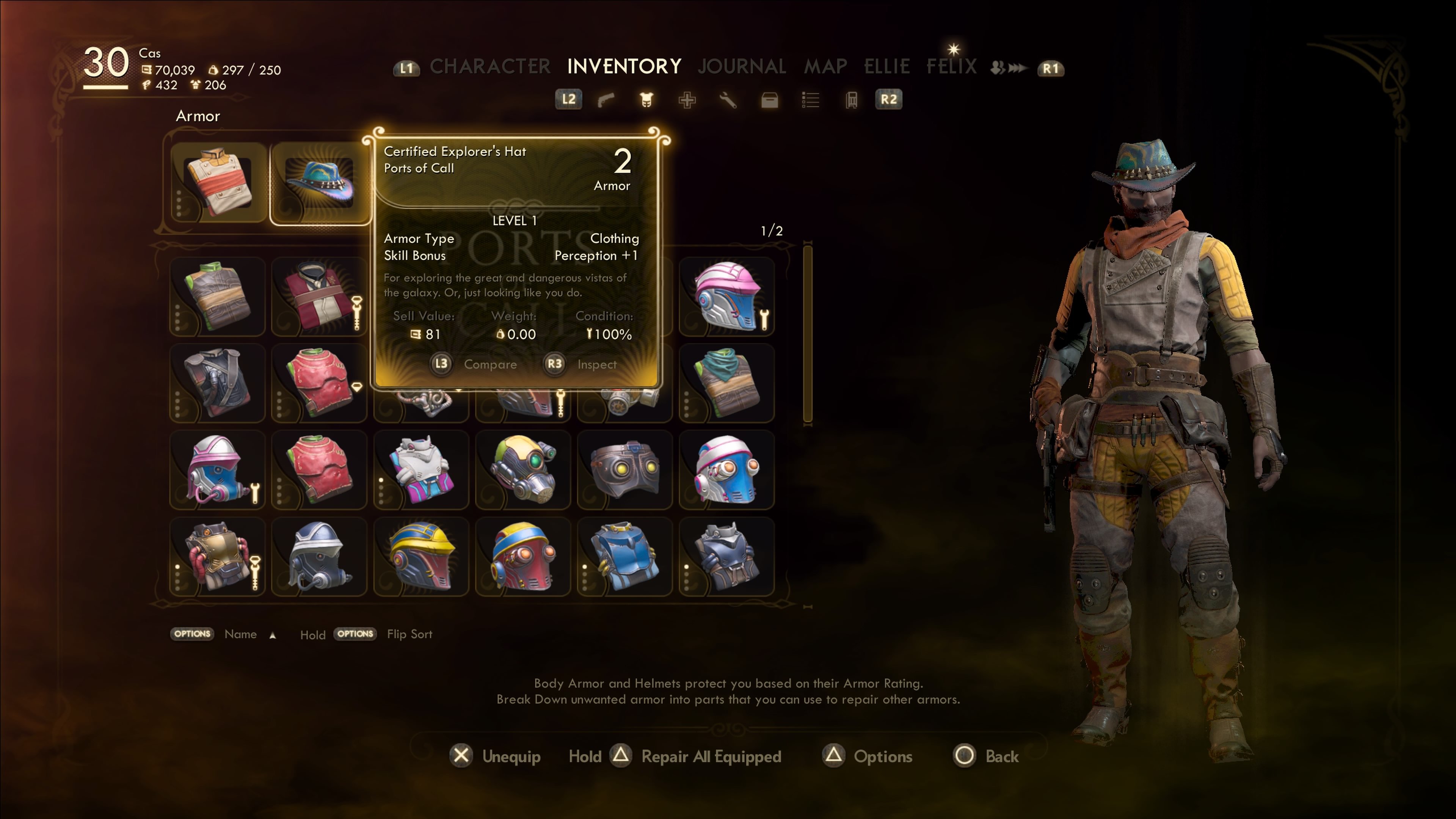 Early on you won’t have access to many of the Pistols I mentioned so just use what you can find, and get Salvager’s Helper when you get to Groundbreaker. It’s quite expensive so save up. Additionally, you can gain Ultimatum not too long after by answering the distress call in Roseway and doing Orsen Shaw’s quest there. The Shrink Ray can be acquired even before doing these things, so you may want to get it first.

Be sure to get Science to at least 40 quickly in order to reduce the cost of Tinkering. You’ll need to do a lot if you want to upgrade many Pistols, so getting it to 100 Should take precedence over getting Handguns to 100. Get Handguns to 40 and then crank Science until you’re there. This will save you a lot of money in Tinkering costs. 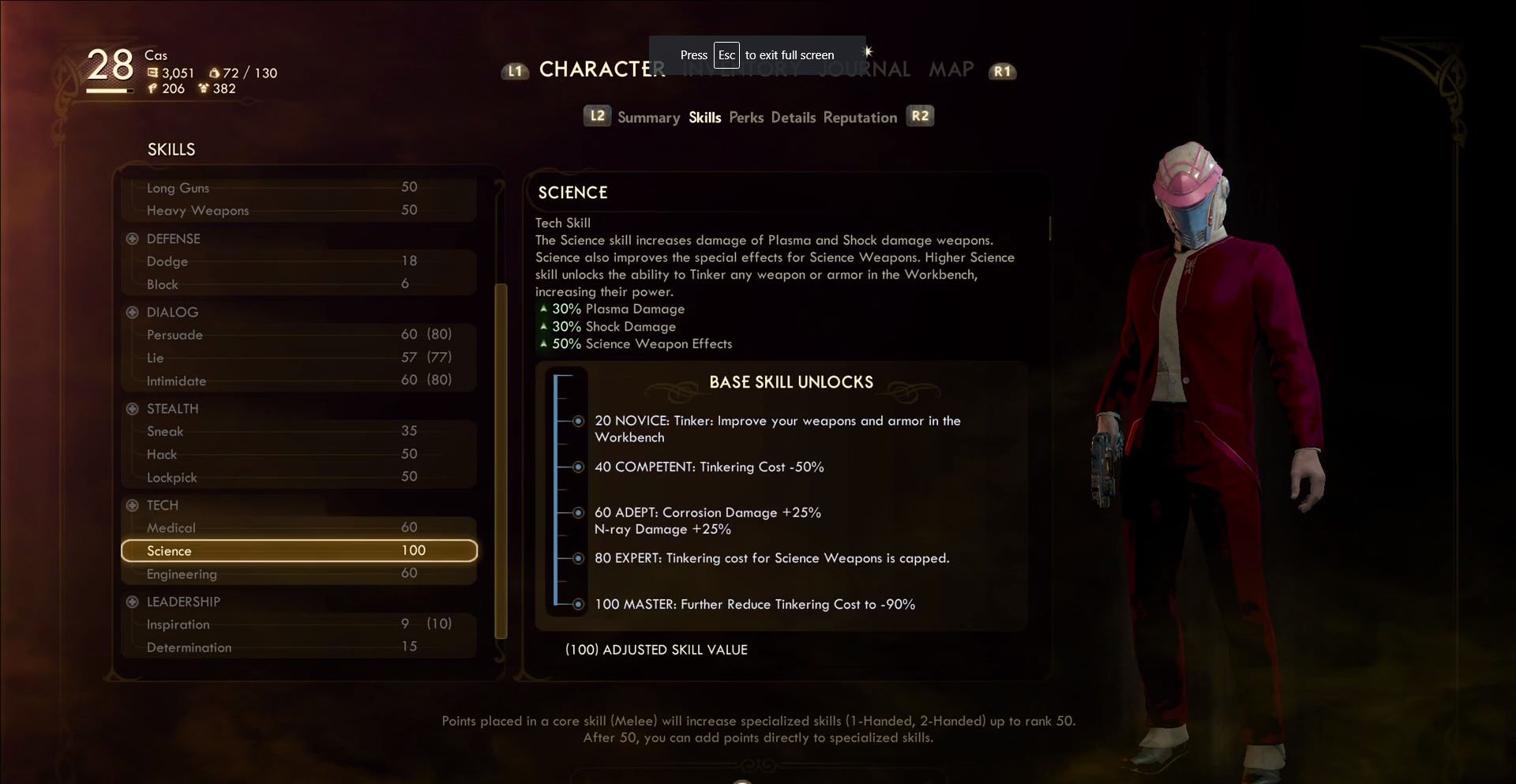 Make sure to swap Pistols when facing different enemies to get the best possible damage type for each enemy. You should have one Pistol of each type of damage, except N-Ray, to make this happen. Since some of the Guns I listed are Unique and their damage types cannot be changed, you’ll have to plan accordingly.

Lastly, Pistols have exceptionally fast weapon swapping time, so don’t be afraid to change weapons in combat if you need a different Pistol. It takes but a second, can make a huge difference, and is one of the benefits of playing a Pistol Build, so use it!

Stay tuned for more Outer Worlds coverage and be sure to check out our Getting Started, Character Creation, Best Weapon and Build Guides if you’re looking for more content, and check out our Review if you’d like to know our thoughts on the game.