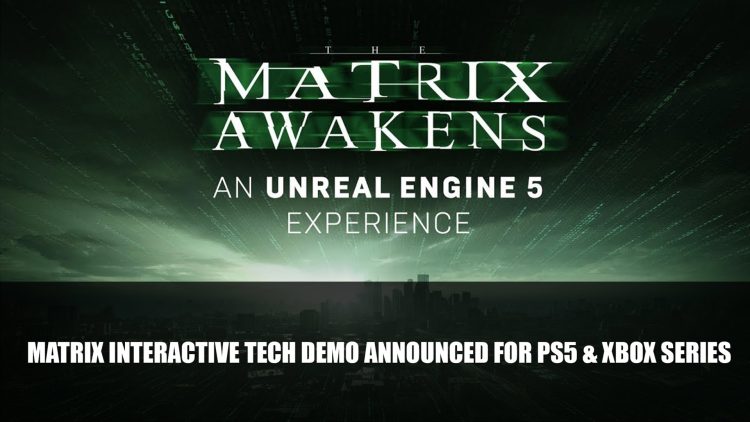 Geoff Keighley has revealed The Matrix Awakens: An Unreal Engine 5 Experience coming to Playstation 5 and Xbox Series X|S, to be revealed The Game Awards 2021.

The Matrix Awakens Interactive Tech Demo Announced for Playstation 5 and Xbox Series X|S; To Be Revealed at The Game Awards 2021

This week is The Game Awards 2021 but the news is already starting trickly out. Geoff Keighley founder of The Game Awards has unveiled The Matrix Awakens: An Unreal Engine 5 Experience, a tech demo for Playstation 5 and Xbox Series X|S which is already available to download, however won’t be accessible until the show.

The Xbox page listing describes it as a “glimpse into the future of interactive storytelling and entertainment with UE5”, as well as “boundary-pushing cinematic and real-time tech demo”. This demo looks to be a way for Epic Games to show off what their engine can really do, on the latest consoles.

In a recent interview with USA Today, Keighley shared that The Game Awards 2021 will get a sense of “true next-generation gameplay at the show” which sounds like we’ll be seeing a lot of what’s to come with “four or five” announcements/reveals on the level of Elden Ring.

The demo is a collaboration with the original movie team including director Lana Wachowski, and Epic Games. Both Keanu Reeves who plays Neo and Carrie-Anne Moss who plays Trinity in the series of movies will have featured performances. This coincides with the anticipation of the fourth Matrix movie, Matrix Resurrections which hits cinemas on December 22nd.

I’ve been waiting a long time for a moment like this.

Pre-download now on PS5 + Xbox Series X/S to be a part of a next-generation #ue5 experience. pic.twitter.com/rYxRulV17z

Whether this is one of those four or five projects is currently unknown, but we’ll get a better look at this tech demo once the show takes place on December 9th. Don’t forget to check out The Game Awards 2021 with us live on Twitch.