PC players can now experience Skyrim all over again…this time in VR! Skyrim VR is the five-thousandth version of Skyrim (or at least, it sometimes feels like it), the game you’ve all loved and completed multiple times over already.

So, what can be said about Skyrim that hasn’t already been said before? Perhaps I should leave this one to the developer. According the Bethesda:

“Skyrim VR contains the complete critically-acclaimed core game as well as all its official add-ons – Dawnguard, Hearthfire and Dragonborn – in one package. Soon you can experience the breathtaking scale of Skyrim in virtual reality on SteamVR. In Skyrim VR, battling cursed Draugr, exploring rugged mountainsides and hunting fearsome, ancient dragons is more immersive than ever, aided by a made-for-VR control scheme that allows players to move, hack and slash at foes, and cast powerful magic with real-life movements. Whether you’re a longtime fan or taking on the horned mantle of the Dragonborn for the first time, Skyrim VR for SteamVR promises an epic journey in virtual reality across a massive world for you to explore any way you choose.” – Bethesda

Skyrim VR is compatible with Vive, Rift and Windows VR.  If you have a PSVR and a PC, you can technically use your headset as a display by using Trinus PSVR and VorpX – although this method is rather fiddly. 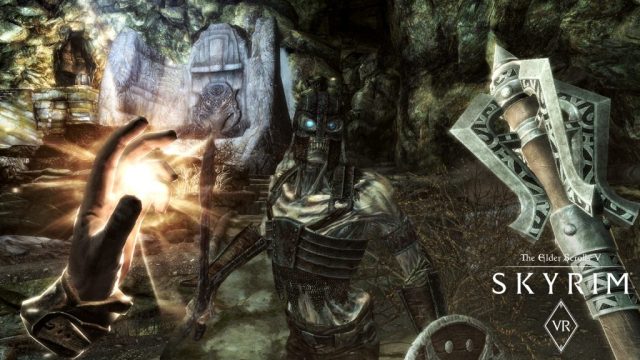 Will you be tempted to buy Skyrim again now that the VR version is here? Or will this version actually be your first experience of Skyrim? Please comment below and let us know.