Zenimax has dropped their latest expansion for The Elder Scrolls Online called Greymoor, following a year of The Dark Heart of Skyrim. This expansion not only adds new areas to quest but a new storyline following vampires, werewolves and more. In this review we go over what new additions have been added to the game and what we thought ESO’s 4th expansion.

Greymoor brings players back to Skyrim or rather back in time, 1000 years to be precise. In this era Western Skyrim is under attack from a mysterious force which will need to be uncovered to discover the conspiracy that lies underground, beneath Blackreach. But you won’t be on this journey alone, you will be joined by a familiar face. Yes Lyris Titanborn is back, and will help you take on the dark heart that now infests the land. Unearth a tale that not only affects the Nords but all of Tamriel. 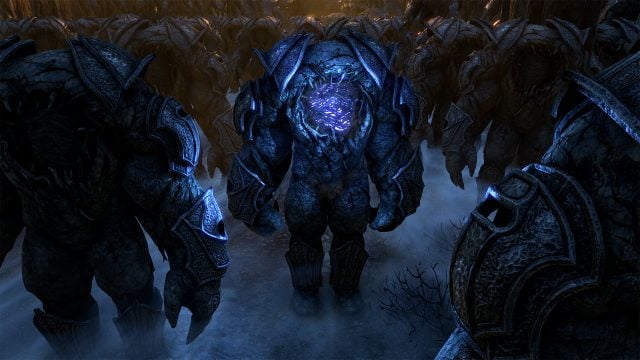 Greymoor is a part of the year long “Dark Heart of Skyrim” theme, which follows the Harrowstorm DLC and continues the Greymoor Prologue chapter. There will also be two further DLC packs, the next one being a dungeon DLC launching in fall and a story DLC releasing this winter, so it’s safe to say your Nordic adventures won’t stop any time soon.

You will meet a number of characters that include a warring king and queen, as well as the scrappy Svana who is determined to get to the bottom of these strange events. There is also Lyris, who is a fan favorite, and we are glad to see her return with Greymoor. If you’re interested in vampires, werewolfs and other supernatural activities then you’ll likely enjoy this expansion.

This chapter introduces a brand new system called Antiquities, which gives players a chance to gain some loot by going on treasure hunts. In order to find these Antiquities, players will need to “Scry” the items found by looting containers or from quest rewards, which will lead them to areas they need to search, by following some clues.

You will be given a lead which opens up a puzzle mini-game which requires you to use your 4 different Scrying skills to unlock, with the aim to use the minimal moves available to unlock the highlighted empty tiles, by connecting the different symbol tiles. If you fail to connect the empty tiles, you will be given more areas to look, meaning spending more of your time in search for the right area. For these areas you will need your Antiquarian’s Eye to find the “Dig Site”. 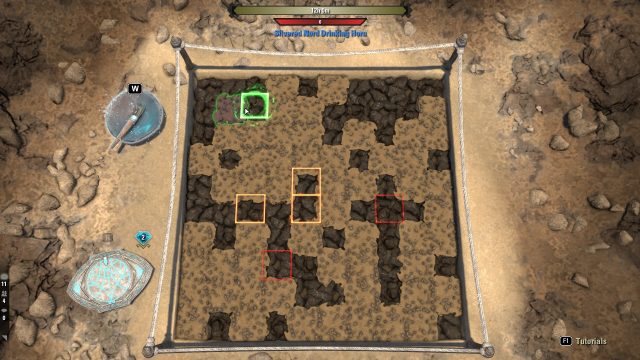 The next phase requires you to Excavate in another minigame of dirt mounds, which you will need to uncover to find where your rewards lie using tools. What’s interesting about this is the main treasure you’re digging for has it’s own HP bar, meaning you dig up bonus treasures but at the risk of damaging the main reward. These rewards can be anything from cosmetics, to mounts or even one of the new Mythic Items. They will also be broken into fragments, so you will need all fragments in order to make the item. 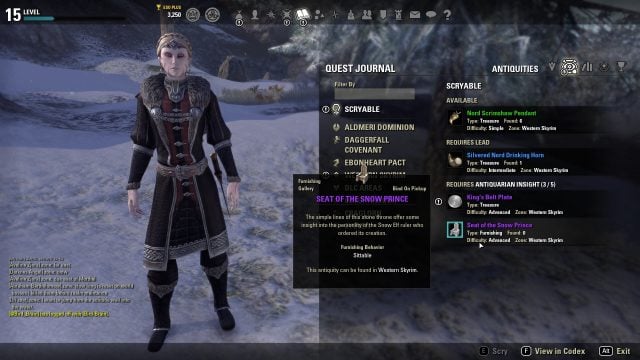 This new addition reminds me a lot of mini-games that are in WoW, but this goes a little more in-depth with the Excavation system and can give some major rewards. Players who are interested in getting some Mythic Items will be grabbing their excavation hat to unearth these unique items, but you will need to grind those levels in order to gain access to rare item leads. The Mythic items come with powerful bonuses, but some also have drawbacks as well, and players can only equip one at any given time.

Vampires have gotten a massive overhaul with the Greymoor expansion, and this means changes have been made to the Vampire skill line itself, but one major change is that you now start off in Stage 1 Vampirism, opposed to Stage 4 in the old system. This makes a lot more sense in practice, and encourages players to feed regularly if they wish to take full advantage of their Vampire abilities. 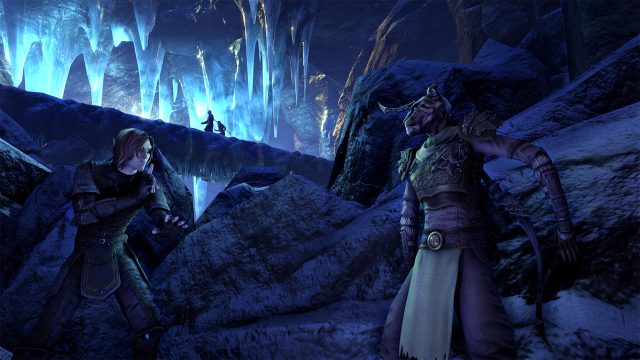 This change really adds to the fantasy of being a vampire as well, going out to feed in order to increase your Vampirism Stage, and the higher the Stage, the less your Vampire Skills will cost (resource-wise).  You also get a cool animation that plays out when you drink from your target, which is similar to that of the Blade of Woe. But using such a skill will now be a Criminal Act, so you will need to be careful about where you drink your victims, as any witnesses will mean you will be attacked by a guard and gain a bounty.

This change now affects overall gameplay in terms of convenience. While you will still use Bloody Mara, you will now use Purifying Bloody Mara to lower your Vampirism stage by 1, if you’ve fed and want to get rid of the effect, so you will now need to think actively about when to use these stages. For example you may want to use some of Vampire Skills in a Dungeon, this means you will need to go feed before stepping into it. There is also the addition of Corrupting Bloody Mara which instantly grants you stage 4, so you might want these on hand when you’re in a pinch. Players should note stage 4 has -100% Health Recovery as well as increased Fire Damage, so keep this in mind.

There is also the addition of Harrowstorms, kind of similar to dark anchors or dolems, as they spawn enemies and then a last final boss. These are instead the deadly storms that are now brewing over Western Skyrim and can give some rewards as well. Not really a major addition but do provide some variation and can be fun to take part, like the Dragon Hunts that we added with the Elsweyr region. 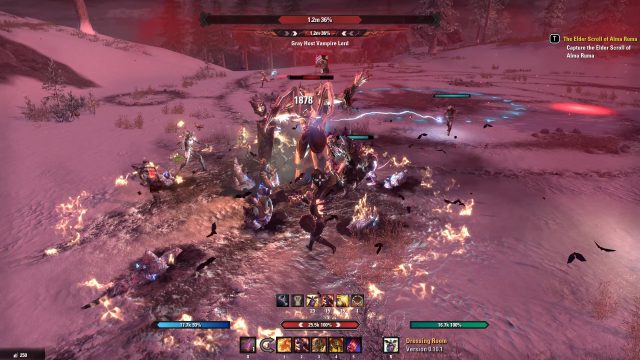 A new 12 player trial is also available with Greymoor called Kyne’s Aegis where brave adventurers will face an army of Sea Giants led by a vampire lord. Throw a mix of vampires, Sea Giants as well as Half-Giants and you’ve got yourself an interesting time. There is plenty going on in this trial including lightning bolts, totems with a number of effects such as poision, AOEs that can instantly kill the unprepared and summons that will set a challenge. There’s also the chance to fire ballistas adding some interesting mechanics. This new trial drops sets Roaring Opportunist, Yandir’s Migh, Kyne’s Wind and Vrol’s Command.

One thing you can always rely on when it comes to Elder Scrolls Online content is the level the voice acting, it’s always impressive and truly adds to the narrative of the game. My favorite characters include the brave Svana, the defiant vampire Fennorian and of course the return of the fab 5’s Lyris Titanborn. If you enjoy the dialogue and what these voice actors bring to the game, you will be happy with this expansion. 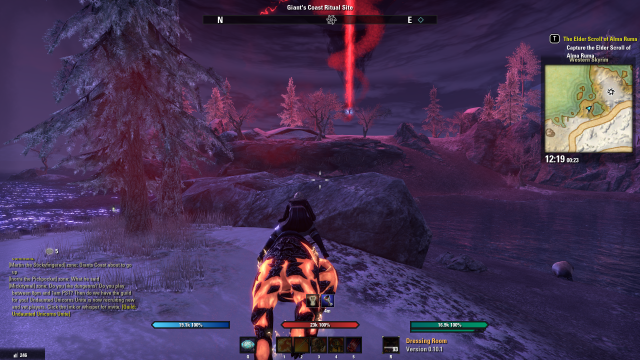 Having Skyrim in this MMO is nothing but wonderous, and while there are of course differences between what is seen in the actual Skyrim game itself, being a different era and all, I think the developers did a good job in planting Western Skyrim into ESO. What’s also pretty amazing is the underground city of Blackreach, a mixture of Darkshades Caverns with hints of the Clockwork City is the feel of the area, it’s an interesting place to explore.

Not to say there hasn’t been a few visual glitches here and there, some textures going missing on roads but Zenimax have been rolling out patches each week to help make improvements to the expansion as well resolve the initial growing pains, specifically during the chaotic nature of the last few months.

Greymoor is what most can expect from a nostalgic filled expansion, but don’t go into thinking it will be what you remember from Elder Scrolls V. ESO brings it’s own flavor of story involving vampires, werewolves and more. Western Skyrim and Blackreach are one of my favorite additions to ESO so far, and the storyline is fun and worth taking your time to experience.

If you like the idea of puzzles and grabbing that fossil brush, the new Antiquities system could be another way to spend your time in ESO especially if you’re after those Mythic Items. While Harrowstorms don’t seem all that different from other world events/dolmens, they do add some further activities to take part in to add some variation.

Overall the expansion adds a familiar feel with it’s Skyrim setting with action packed questing. There are some great new places to explore and puzzles with Antiquities adding some fresh content to the game. The puzzles are fun once you know what you’re doing and anyone motivated by the possibility of new Motifs, furnishings or after those Mythic items. I like the fact they added an active way to sought after items through an activity, rather having them drop randomly from looting chests or barrels for example.

If you’re making your way to Western Skyrim be sure to drop by our Elder Scrolls Online wiki for all your adventuring needs. If you want to know all the changes with Update 26 be sure to watch our ESO Greymoor Patch Breakdown video.

8
Summary: Greymoor is everything you can expect from an expansion that promises The Dark Heart of Skyrim. It follows an sinister plot full of vampires and the supernatural. Grab your adventurer's hat and maybe your fossil brush as you will encounter new items discover and an underground city to explore. If you're looking for some new experiences in ESO you will have plenty to sink your vampire teeth into with 20+ hours of content depending on whether or not you tackle the side quests. Though the least impressive of the game's 4 Expansions, it's still worth picking up, especially if your an Elder Scrolls fan!
Story & Setting (9)
Gameplay (8.5)
Audio & Visuals (8)
Replayability (8.5)
Price Point (8)