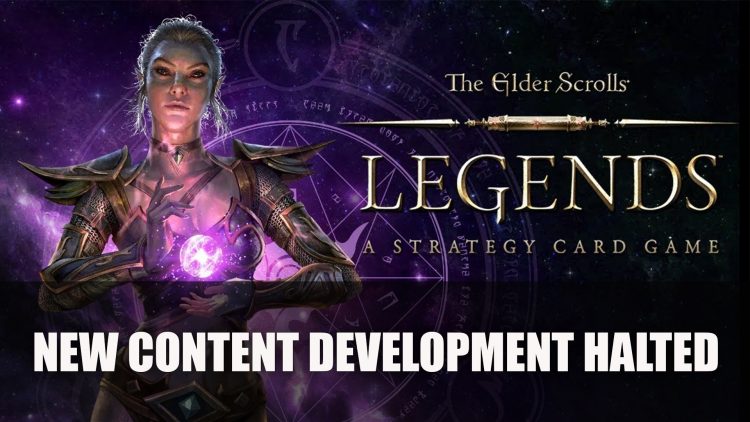 In an official statement for The Elder Scrolls: Legends, Bethesda share news on further content for the card game.

The official statement which was shared in the subreddit, explained that there was suppose to be one more update for the end of this year, but has been put on hold as Bethesda has:

…decided to put any new content development or releases on hold for the foreseeable future.

The post also shared that this would not impact the release and development of the Gaea’s Asia release version since this operates separately. Further monthly reward cards and in-game events will still take place, however any further expansions or future content will not be under development.

Until then, you can still download and play Legends on all existing platforms and compete online as well as in the single-player modes. We will also continue to support the game with monthly reward cards and regular in-game events. New expansions and other future content, however, are no longer under active development. We will continue to provide ongoing maintenance support.

In order to thank players for their continual support, Bethesda has shared they are “giving away The Tamriel Collection — an assortment of new, three-attribute cards and more — to all players for free upon their next login.”

This isn’t the only card-game that’s received bad news recently, with The Witcher game Gwent also pulling back on future content for PS4 and Xbox One platforms in favour of mobile. The virtual card game market is quite competitive with the likes of Hearthstone from Blizzard and Magic the Gathering. Things are only going to get more crowded with upcoming title Legends of Runeterra from Riot releasing in 2020.

Elder Scrolls Legends is available to play via iOS, Android and PC.

For more news be sure to read next CD Projekt Will Discontinue Support For Witcher Card Game Gwent On Consoles and Last State Of Play Of 2019 On December 10th. You can also read/watch a rundown of the recent news in Top RPG News Of The Week: December 8th (Pathfinder, Persona 5 Royal, Divinity And More!).