Back in August, I published my first deck guide for the Elder Scrolls Legends: Purple Prophecy . At the time it was one of the most fun and interesting decks I had played to date while also being pretty succssful. Over a month later, I still love playing it, but have fallen in love with a completely different deck and have put together a guide for those looking to expand their options. This deck is called the Blue Marshall Deck and you can see it in action in the video above.

Why is it called the Blue Marshall Deck? That’s a great question, and the answer is simple: because you have a large quantity of creatures and 90% of them are blue. Most Mage (Blue/Yellow) decks are either two types: a) heavy on Action Cards, mostly Creature removal, stalling the game until they can play powerful cards or b) heavy on Yellow Creature Cards with Blue Action Cards to support them, removing other player’s Creatures. The Blue Marshall Deck is neither and is unlike any other Mage deck I have played. Let’s get into the card list and what makes this deck tick. 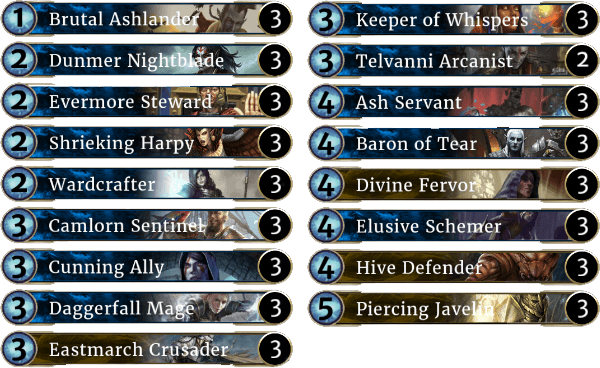 A 3 Action Card Mage Deck…you’re out of your mind!

You’ll notice right away that there are very few Action Cards, 3 to be exact. This is almost unthinkable for a Mage deck. The name given is Mage and, yet here we are with a scant selection of spells. The deck has a very low casting cost average, and this means that you will almost never suffer from poor draws, which honestly, is about 50% of your losses if you’ve been playing competitively. This deck also allows for you to play from ahead or from behind, so you don’t have to burn your opponent or slow play them, you can adapt your strategy to the deck you are playing. This is really the key to this deck, knowing what you are up against and how to play this deck against it. For this reason I would classify this deck as Advanced.

Other than those wrinkles mentioned, this deck is relatively straight forward. You usually lead with Brutal Ashlander, Dunmer Nightblade, Daggerfall Mage or Cunning Ally. Which card you play will depend on the deck you are facing, your draw and whether you went first or second. You don’t want to trade Creatures if you can help it, so be sure to follow up with Shrieking Harpy, Wardcrafter, Camlorn Sentinel or a Firebolt, if you drew one from Cunning Ally. Generally, you want to pass if you cannot protect your creature the following turn, exceptions here are against burn decks and against decks where you must get rid of a specific creature no matter the cost such as Bruma Armorer, Fifth Legion Trainer, etc.

Daggerfall Mage, Cunning Ally and Baron of Tear are really the staples of this Deck. Daggerfall Mage Comes with Ward and gives you a Tome of Alteration, helping with damage and card draw. Cunning Ally gives you a Firebolt, which is great for cleaning up little enemies that may kill a more powerful creature. Baron of Tear is a game changer and can save your ass when you are being pounded relentlessly by your opponent by granting Guard to all of your Blue Creatures . It’s also fantastic to play when your opponent has not calculated that your creatures my gain +1/+0, thereby often providing opportunities to kill enemy Creatures.

The deck has excellent card draw in Dunmer Nightblade, Daggerfall Mage, Cunning Ally, Eastmarch Crusader, Telvanni Arcanist and Elusive Schemer. Furthermore, the creatures in this deck are exceptionally hard to kill, or provide a benefit when they die, making your opponent make difficult choices that often lead to mistakes. To cap it off, there’s Divine Fervor… 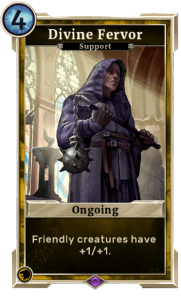 And God said let there be light…and there was…and it was called Divine Fervor!

Divine Fervor might just be the best card in the game. You can build many competitive decks around it, just as I have done here. I have absolutely gotten 3 of these out in games before and 2 is not that uncommon. Simply put, even getting one of these out raises your chances of winning by about 50%. This card is the reason we have so few Action Cards and so many Creature Cards. We want as many cards as possible to get the benefit of this divine card! One of the great things about this card too, is that there are only about 3 cards in the game that can destroy it and 2 are Purple. So 75% of the time, it’ll remain in play the entire game. Never mulligan this card if you draw it to begin the game, unless you drew more than one.

Some general notes and tips for this deck. I like to drop creatures into play and then drop Divine Fervor, given the option mid game. Often your opponent will not calculate for your creatures all getting +1/+1 the following turn and it can open up some great opportunities for easy Creature kills. Ash Servant is a great card to wipe out a small Creature Card and then enter the battlefield, sometimes as a 3/3 or 4/4. Hold this card until you can kill something with it. Save your Steel Swords from your Dunmer Nightblades for killing large creatures or hold them to get a lethal kill on the enemy player when he has forgotten you have it. Keeper of Whispers is in the deck for 2 reasons: 1) it’s a 3 mana 3/4 which makes it really tough to kill and it can trade with many 3/3s and still live and 2) to help combat purple decks. Purple decks are some of the most difficult to beat with this deck, mostly for their ability to combat Divine Fervor, they have tough Creatures and they can overwhelm you when played with yellow.

You can never have enough Nords in a deck.

Some cards you might consider adding are Pit Lion, Morthal Executioner and Fire Storm. Pit Lion is a tough card to kill and can really open up the board for you early. The challenge is being able to keep a creature in either lane on the board early. Since most of our cards have low costs, you can probably achieve this around turn 5 reliably to further bolster your army. Morthal Executioner is a good alternative to Keeper of Whispers. It’s still just as tough to kill and can potentially do more damage, so consider swapping these two if you find you don’t really use Keeper of Whispers’ ability much. Fire Storm is a great card to consider and I might add it to my Deck as well. The reason being, is it isn’t the big bad creatures you fear with this deck, but the small tokens that can kill your creatures for chump change. This card will help wipe them off the board if they get to be too much.

My win/loss record with this deck over the past 30 games of competitive play is 23/7, which is the best I’ve posted to date. I hope you enjoy the deck, and I urge you to try it out for a little something different. It’s always fun when your opponent has no idea what cards you have or will play next! Thoughts on the deck? Have a deck of your own to share? Share your ideas in the comments!