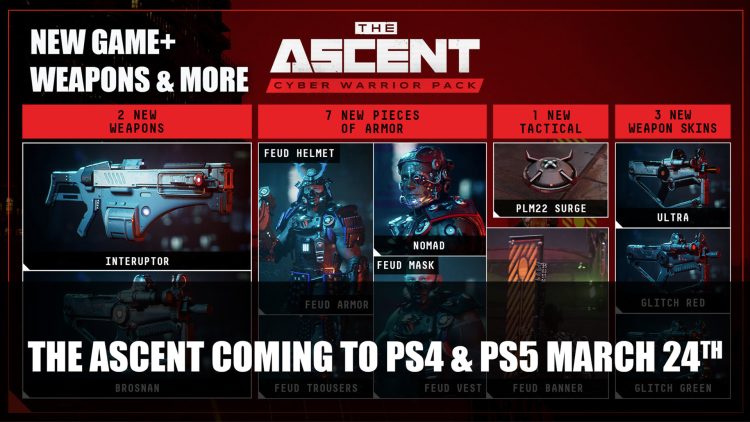 Publisher Curve Games and developer Neon Giant have announced the cyberpunk RPG The Ascent will be coming to Playstation 4 and Playstation 5 in late March. New DLC CyberWarrior has now released on PC.

The Ascent Will Be Released on PS4 & PS5 in March; CyberWarrior DLC Released for PC

The Ascent the Action-RPG will be coming to platforms Playstation 4 and Playstation 5 in on March 24th according to developer Neon Giant. The title was originally released on PC back in July last year, making our  Top 5 Upcoming RPGs Of July 2021.

In case you missed it, The Ascent offers both solo and co-op fast-paced action gameplay meaning you can jump in with a friend. It uses classic RPG mechanics, allowing players to build their own characters, diving into a world full of verticality.

If you are planning on picking up The Ascent be sure to check out our latest guides in The Ascent Best Skills, Attributes And Augmentations Guide For Your Builds and our The Ascent Best Builds: Terminator Tank Build.

A brand new game mode New Game+ has also been added for free available on Steam, so now you can take up further challenges in The Ascent. Players will be able to access this mode once they have completed the main campaign by choosing “Single Player” and then selecting “New Game+”. You can choose a save you want to change into New Game+ and head straight in. The devs tease those who finish the game once again may find some additional content.

In New Game+ you can bring in gear, weapons, knowledge and skills you have earned from your first run of the game, but this time with a higher level of difficulty when it comes to enemies. The level cap has also increased from 30, weapons upgrades increased past Mk.10 and more.

The latest DLC CyberWarrior is now available for PC players for $4.99 / £3.99 / 4.99€. This latest content adds a new Samurai theme armor set. There are also 2 additional weapons, one new tactical and 3 new weapon skins. You can check out the details for the new additions below: 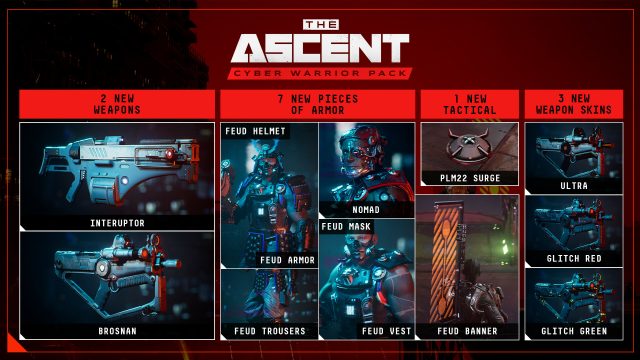 If you are curious to know what we thought of The Ascent be sure to check out our The Ascent Review Impressions: A Cyberpunk World Worth Exploring.