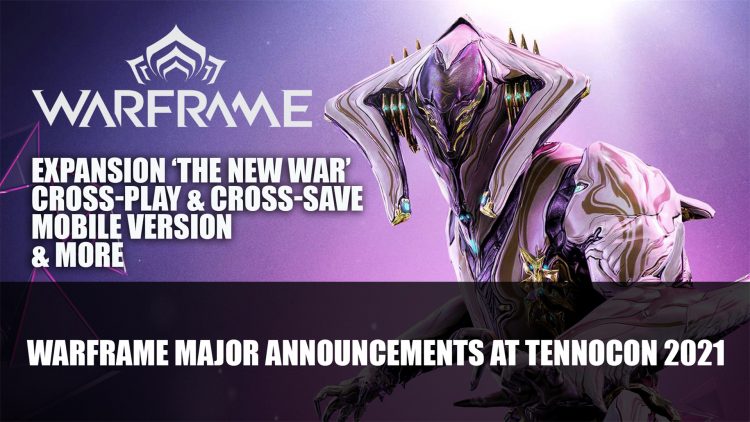 Over the weekend Digital Extremes hosted Warframe Tennocon 2021 with some big reveals. In case you missed it here are some of the major announcements that were unveiled.

Over the weekend developer Digital Extremes held TennoCon 2021 which made some major announcements for the fast-paced action game Warframe. This includes a new expansion, new warframes, new features and more. Read on for the major reveals!

The next expansion The New War will be releasing for Warframe later this year. It will include a “cinematic quest”, meaning big story quests, full of cutscenes and the biggest expansion developer Digital Extremes have ever made. The New War will bring the evil Sentients from beyond the solar system to Earth, ready to destroy all life in the Origin System.

What’s new with this free expansion is it will launch simultaneously across all systems. The New War introduces a linear narrative, which will take players through the Sentient invasion, portraying multiple perspectives. This means taking on different roles in The New War quest, playing other than your own Tenno, getting to grips with the whole story.

During the livestream Digital Extremes previewed 30 minutes of extended gameplay, demoing the beginning of the quest. This also shows off the transitions between different perspectives as the Sentient invasion commences. It also previewed how the new system will work.

While these swaps between characters seem to be scripted, they do an amazing job of showing the scale of expansion. From peering through the eyes of a Grineer soldier stranded on the Plains of Eidolon as the Sentient war machines encroach and slaughter his comrades. To playing through as Teshin, a major NPC from the previous quests, who will meld his sword with different elements to battle Sentients aboard one of their very own ships.

Official description for The New War expansion:
With Earth’s mightiest bastion, Cetus, burning and the pride of the Corpus fleet lying in ruins, the combined strength of the Tenno and their allies might be the key to this new war.

Cinematics look to have been upgraded and the flow of cutscenes and combat look streamlined.

One big feature coming to Warframe is not only cross-save but also cross-play. This means you can play on different platforms and progress, as well as team up with friends regardless of what platform they’re playing on. This includes playing on the newly announced mobile version. Crossplay and cross-save will be rolling out with the release of the new expansion The New War.

There will also be a host of new Warframes, armor and weapons. One Warframe confirmed is the Caliban. Caliban will be arriving alongside The New War expansion later this year, who is part Sentient. This Warframe is described by the devs as “wholly destructive.” One passive ability revealed was the resistance to damage types as they take hits, which will also include Caliban’s squadmates. Caliban will the 48th Warframe to be released.

The appearance is also quite different from the original Nidus, with a more overgrown look. There will be more details about this Warframe as we get closer to the release date.

Nidus Prime will release in the next Prime Access this Summer.

Command the Infestation as the undying #Warframe.

Warframe: The New War will release later this year 2021.

For a rundown of recent news be sure to check it out here in Top RPG News Of The Week: July 18th (Final Fantasy 7 Remake, Path Of Exile, Persona And More!).