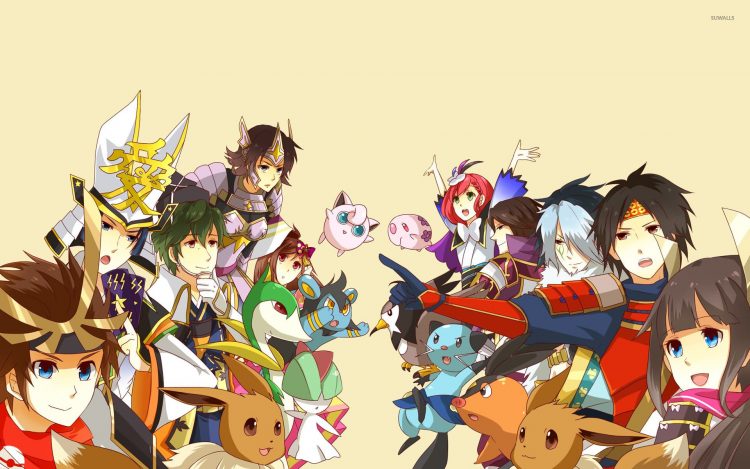 The strangest RPG crossovers of all time!

Pokémon Conquest was a strategy roleplaying game developed by Tecmo Koei and published by The Pokemon Company. It is a crossover between Pokémon and the Nobunaga’s Ambition series, known for tactical Samurai combat.

How did such a strange crossover happen? Well, it was because Tsunekazu Ishihara of The Pokemon Company was a fan of Nobunaga’s Ambition and Tecmo Koei president Kou Shibasawa was a fan of Pokémon. This gave them an opportunity to work with each other. As the first Nobunaga’s Ambition game featured seventeen regions and at the time there was just seventeen different Pokémon types, it was simple to divide up where the Pokemon would be located.

To make matters more confusing, Pokémon Conquest featured characters from the Samurai Warriors games. The choice of Perfect Link Pokémon for a given Warlord was influenced by their Samurai Warriors 3 personality or moveset. Up to six Pokémon could be deployed to the battlefield each time; one per warrior.

In terms of whether it was any good, perhaps surprisingly the answer is yes. It’s sitting pretty on an average score of eighty percent on Metacritic and is a nice entry level SRPG. It was popular enough to spawn a manga series. It’s worth noting that many reviewers gave it nine out of ten (or ninety percent) but the average was dragged down by some fifty percent scores from some sites that just didn’t get it. 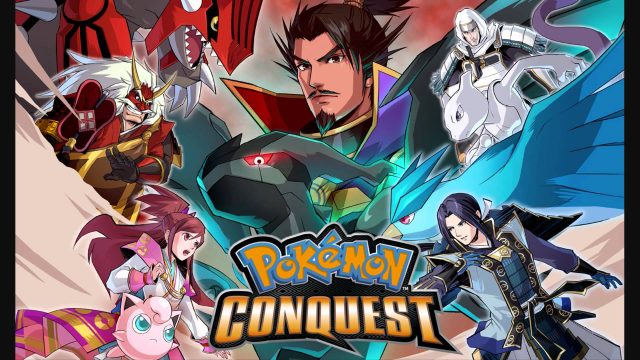 I’m sorry but no, Jigglypuff. No matter how stern your expression, you’ll never be a bad ass samurai.

Project X Zone featured a huge lineup of characters. There were over fifty characters from twenty nine different franchises from Namco Bandai, Capcom & Sega. It included characters from Darkstalkers, Valkyria Chronicles, Street Fighter, Tekken, Mega Man, Resident Evil and so on. These are characters that I never imagined coming together. Arthur from Ghosts ‘n Goblins, doing battle alongside Ulala from Space Channel 5. It’s as crazy as it sounds. Is it any good? Yes. Well…kind of, anyway. The story is dross but it’s simple fun and a pure fan-service game that works due to nostalgia. It reminds me of the memberberries from South Park. “Hey, you ‘member Dante?” “Yeah, Dante! I ‘member!” “Do you ‘member Morrigan?” “Ooh, Morrigan! I ‘member!” “Do you ‘member slavery?” “Yeah, I…wait. What?!”

A sequel followed, which was basically more of the same but with an even larger roster of characters, including Phoenix Wright. I guess if you’re going to beat up a lot of people, it makes sense to have a decent lawyer on your team. 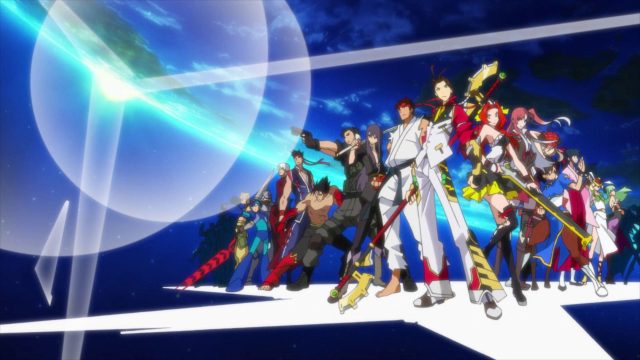 With such a huge lineup of characters to choose from, you’re spoiled for choice in Project X Zone.

Recruit characters from Disgaea, Ar tonelico and DarkStalkers! In an RPG that both looks and plays like a bad PlayStation One game! Yay! As a Disgaea fan, I wanted to love Cross Edge. I really did. Unfortunately, it disappointed me. It’s a game for die-hard JRPG fans only and even then, there are over a thousand better JRPGs that you could play instead of this. The story is poor, the graphics are poor, the game mechanics are convoluted and confusing and despite it being such a basic game, there’s a fair amount of slow down. You also have to grind a lot just to get through the main story. With so many characters competing for your attention, it’s also hard to become emotionally invested with any of them.

Cross Edge was eventually also released on the Xbox 360, as Cross Edge Dash. 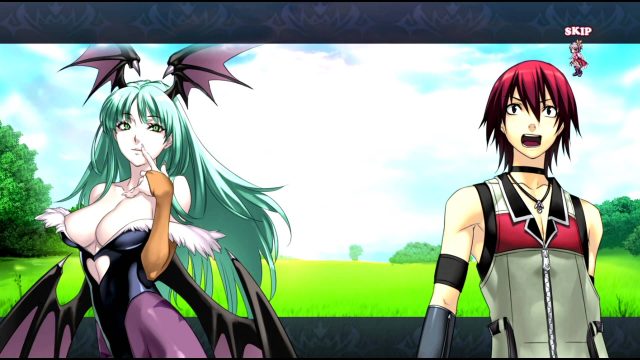 “Skip” is good advice for this game. I’ve already endured the pain of this crushingly disappointing game so that you don’t have to. You’re welcome.

Did it work? I don’t know. Kind of? They tried to make the sets of armour fit with the games that they were included in and the sets looked kind of cool but it still never quite looked right. At the start of both games, the sets of armour seemed pretty powerful. I was glad when I unlocked more powerful armour later in the games and was able to justify switching out of these sets.

Kingdoms of Amalur was a great roleplay game and I hope that someday it gets a sequel. It may be unlikely though. It sold reasonably well…shifting over 1.2 million copies in 90 days. However, a ridiculously large amount was spent on making the game (over $63 million), so the sales number just weren’t high enough. 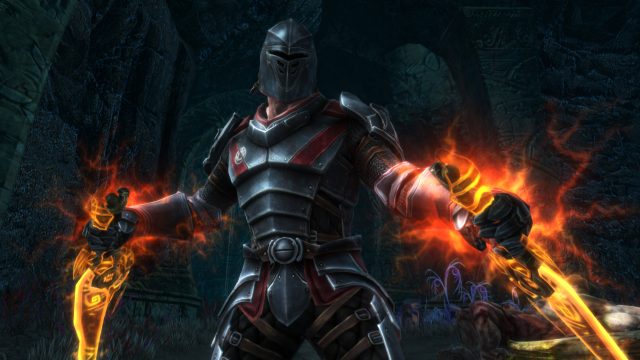 “I’m Commander Shepard and this is my favourite fantasy RPG on the…wait. What have you got me selling now?!”

Not content with just jumping into bed with one RPG lover, Mass Effect 3 also seductively winked at the Final Fantasy series and let it know that it was open to a relationship. The result? You can wear Mass Effect armour in Final Fantasy XIII-2 if you really want to. Unlike the Kingdom of Amalur crossover where they at least tried to make the armour sets look like they belonged, this was a lazier inclusion. It just looked wrong on the Final Fantasy characters. After putting it on Noel and Serah, I went “Hell no!” and took it off again. I love Final Fantasy and I love Mass Effect. I also love beer and cheese but I don’t want my pint of beer to taste of cheese.

The more recent Final Fantasy XV Assassin’s Creed crossover event worked better partly as it had an actual story and was fun to play. It was a little cringe-worthy hearing Noct go on about how much he loved the Assassin’s Creed series though. Just get a room, you two! 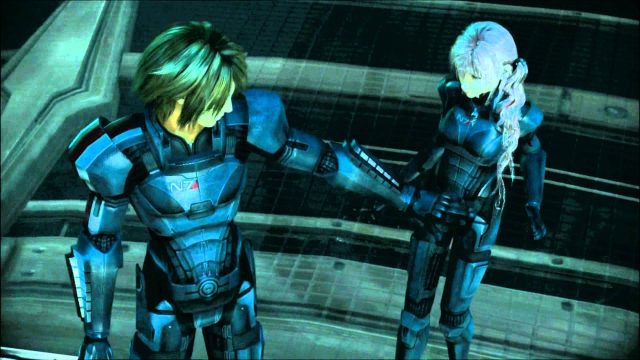 “I’m Commander Shepard and this is my favourite JR…no, I won’t do it. I’ve got my integrity and this is just too much! Forget this, I’m going home. You’ll just have to save the galaxy without me.”

There are no words that will do the strangeness of this one justice. I’ll just leave this picture here instead. 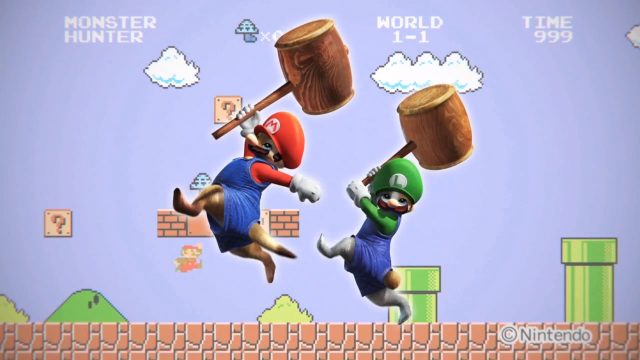 “Itsa me, Mario Monster Hunter! How’m I gonna jumpa on your head? You so big! Mamma mia!”

What do you think the strangest RPG crossover was and did it work for you? Also, what RPG crossover would you like to see? Mario meets Dark Souls perhaps? As always, please comment below and let us know.

I hope you liked this article. If so, check out the Mass Effect Loot Boxes & Star Wars discussed on EA Investor Call article. You may also want to read the Pokemon RPG for Switch in 2018? article.