If you haven’t heard of Stranger of Paradise, or you didn’t know it was a Final Fantasy game, you’re not alone. It was rumored a few weeks ago, but was finally unveiled during Square Enix’s conference during E3, in a rather confusing manner that left players wondering what the game was really about. Adding even further confusion was that Garland, the antagonist from Final Fantasy 1 (Origins), appeared in the trailer.

In this article, we’ll tell you everything we’ve learned about this new Square Enix game, one that is being co-developed by Team Ninja, famous for their Ninja Gaiden franchise, and also their Souls-Like Nioh.

While not a whole lot is known about the game’s story, the general concept seems to be that you are playing as the Warriors of Light during what appears to be the Final Fantasy 1 timeline. You control the main character, Jack, together with the other Warriors of Light, facing the forces of Chaos. 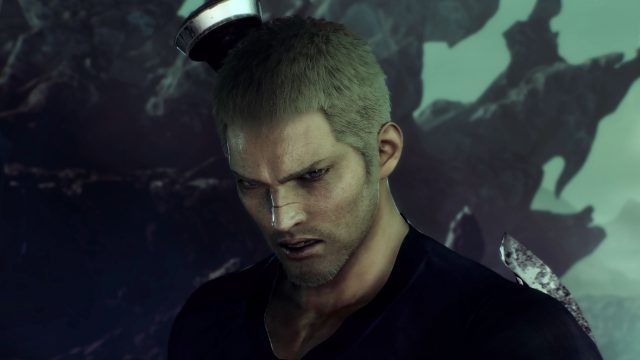 The demo of the game actually begins in the Chaos Shrine, which is the first dungeon of Final Fantasy 1 (in the Origins edition), where you will learn the basics of combat and gameplay before taking on Garland, or as he is otherwise known: Chaos.

The demo ends immediately following Chaos’ defeat, prompting the question: Is this a Final Fantasy 1 Remake completely re-imagined not unlike Final Fantasy VII Remake was?

It’s incredibly hard to know for sure, but all signs point to yes it is, and since I’ve made it no secret that Final Fantasy 1 is one of my top 5 games of all time, I for one couldn’t be happier. Especially since, if the game sells well, it’s highly possible we will see sequels that may follow the stories of the first Final Fantasy games before VII.

The gameplay of Stranger of Paradise is somewhere between a Final Fantasy game, and the recent Action RPG Nioh, which shouldn’t be too surprising given that Team Ninja is working on the project. Let’s discuss combat first, and then get into some of the other aspects of the gameplay.

The combat of Stranger of Paradise will remind you of Nioh fairly quickly, though there are marked differences. You can run, dodge, block, parry and counter, all while using an energy gauge that will leave you unable to move if you expend completely. Enemies also have a similar gauge, that allows you to execute them if you deplete it, and how quickly you do this is determined by your Break damage, not unlike Nioh.

Beyond that you will also have combos that are dictated by your Job (Class), and you can slot these into combo slots in your character screen. What I really like about this, is that your combos don’t change, just the move itself, so your muscle memory stays, you just do something different. It’s a subtle thing, but one that I find makes gameplay easier to pick up, especially if you’re nearly 40… 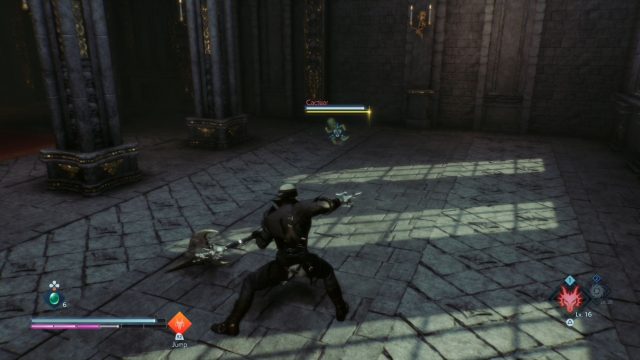 Your attack patterns and combos are also affected by your Weapon type, of which 3 were available during the demo: Mace, Greatsword and Lance. Each one functions differently, as you would expect, and also deals a different type of damage (Blunt, Slash and Pierce). I would imagine more weapon types will be available at full release, but I’ve no idea yet how many might be present. Nioh had just over a dozen, so it wouldn’t be crazy to think Stranger of Paradise would have a similar amount.

Many combos and abilities require MP in order to cast, and you build this up by attacking enemies, so you can’t just spam these at will. Additionally, you can cast Spells from some Final Fantasy classics, and the way this is handled is rather interesting. 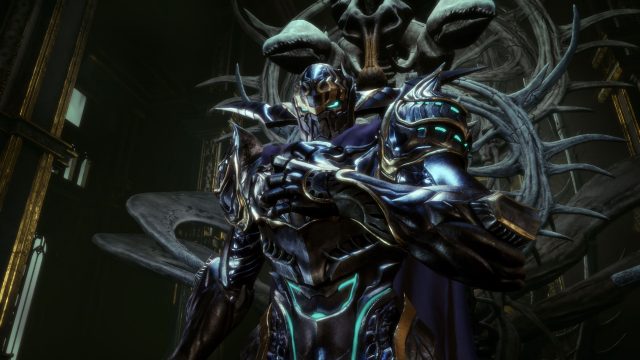 Magic can be cast if you currently have a Mage role equipped, and in the demo only Mage and Black Mage were available, so you could only cast damaging spells. However, I would assume that in the full release you will also have White Mage and Red Mage, allowing for other forms of magic.

You cast magic by holding down the right trigger, and using the wheel to select the spell type you want to cast. The longer you hold the trigger down the stronger the spell becomes, but if you get hit while doing this you will be interrupted and you will have to begin again, so there is a risk reward system with trying to cast more powerful versions of spells. It’s actually a pretty great system that allows your spacing and mobility to dictate how well you can cast spells.

Stranger of Paradise Customization and Equipment

As players defeat enemies and gain XP they will gain points they can spend in their Job trees. Jobs are essentially Classes, and the ones shown in the demo were Swordsman, Mage and Lancer, as well as the Advanced Jobs: Warrior, Dragoon and Black Mage. You can have 2 Jobs slotted at one time, and you can swap between these 2 during combat by simply pressing a button. This allows you to be a Mage one second to cast a spell, and then swap back to your Lancer to keep on jabbing away at enemies. 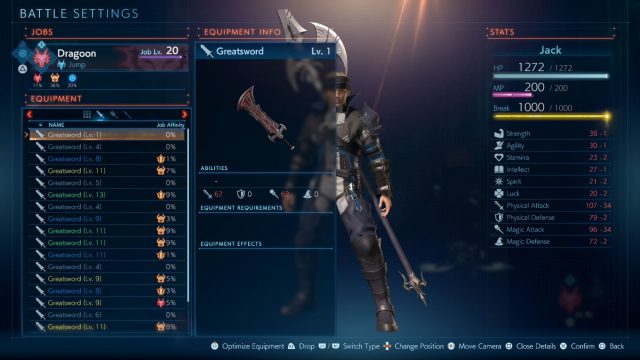 I would fully expect to see more Jobs and Advanced Jobs at full release, but just which they will be is anyone’s guess. Historically, Final Fantasy had a martial arts type class, as well as Thief class, so we’ll just have to wait and see!

Besides Jobs, players will also get to customize their combos and abilities, which they will unlock through the Job trees. You can only have a certain amount of these slotted at once, so they will help to shape each player’s Build. There is also equipment of course, and this is a huge part of the game.

Players will gain equipment from defeating enemies and looting chests as you explore areas that feel markedly similar to the dungeons of Final Fantasy. Weapons and Armor can both be found, as well as Shields, and they will come in different rarities not unlike Nioh. 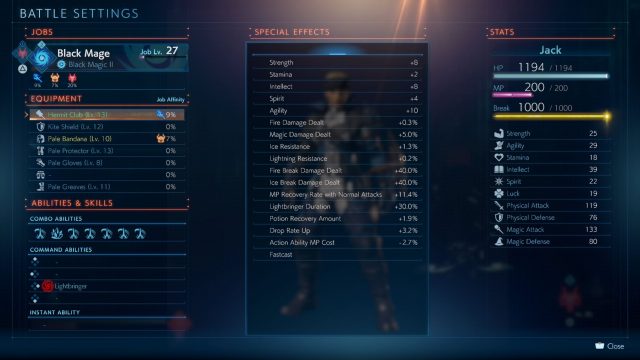 The bonuses on this equipment seem to be random, but the stat increases and playstyles they enhance are not. This means you can find the same piece of gear multiple times and it might be better or worse depending on the random bonuses, again not unlike Nioh. And since enemies respawn if you rest at a check point, you can farm loot if you wish, and you might need to, because Garland is no joke on the hardest difficulty of the game.

I never thought that I’d ever see a remake of Final Fantasy 1…I never thought it would ever be turned into an Action-RPG by Team Ninja…I never thought I’d enjoy it if they did…but all 3 of these things are true. Square Enix has somehow managed to preserve the essence of an iconic game that originally released in 1987, and Team Ninja has elevated its combat to a style that may be the best in the industry. 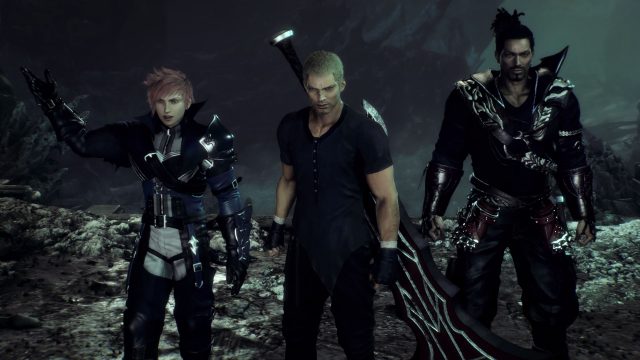 Stranger of Paradise is still rough around the edges. The frame rate was poor, and companion AI needs a ton of work, but there is some serious potential to this game, and after a tragic E3, it’s actually nice to have some hope outside of Elden Ring.

If you are not a Final Fantasy fan, Stranger of Paradise will without a doubt be far less appealing to you, but for those of us that enjoy both Final Fantasy and hardcore action games like Nioh, it might be a dream come true. 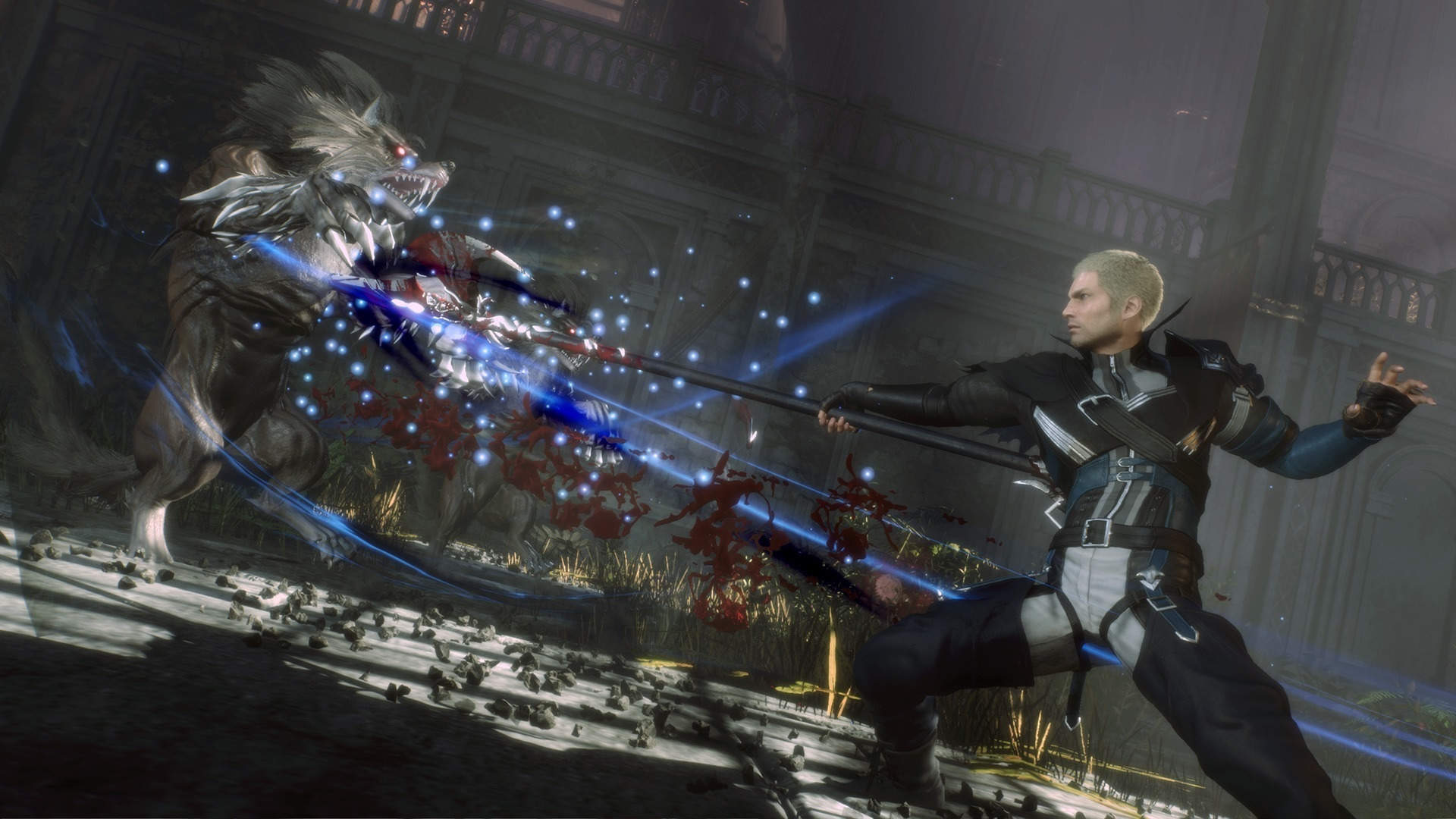 The boss fight at the end of the demo had my heart pumping, and gave me that satisfaction many of us have come to crave in hardcore Action-RPGs, all while listening to Final Fantasy music that pulled at my nostalgia in ways that I didn’t even know it could. I’m not saying Stranger of Paradise will live up to the hype, but it has me more excited than any new title revealed at E3 2021 so far, even if that is a low bar.

Stranger of Paradise: Final Fantasy Origin will be releasing on PC, Playstation 4/5 and Xbox One/Series X and S next year, and there is currently a demo playable on PS5 until June 24th. If you are one of the lucky few who managed to get a Playstation 5, I highly suggest trying it out!

If you want more previews be sure to check out next Tainted Grail: Conquest Preview & Features Overview. Be sure to read/watch our latest review which covers another Team Ninja iconic franchise now in a handy collection, in Ninja Gaiden Master Collection: Is It Worth It? Review Impressions Of This Sekiro Souls DMC Before Nioh.