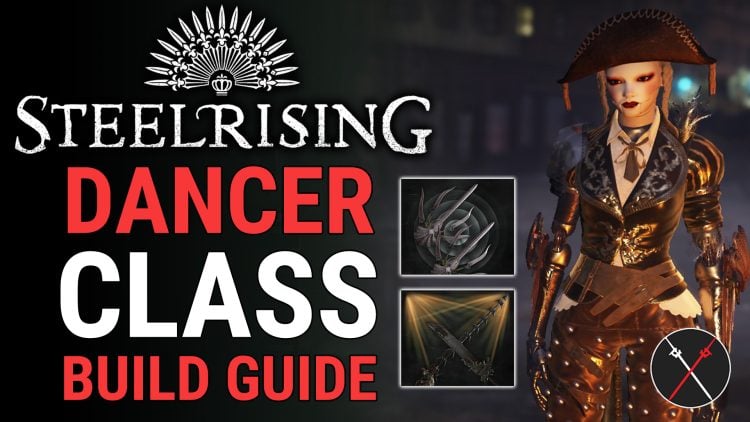 Steelrising Dancer Class Guide: How to Build a Dancer – In this Steelrising Dancer Class Guide, I’m going to show you my Dancer Build, which swiftly immobilizes enemies at close range. I will share the Attributes you need to prioritize, the Modules you will have to equip, the consumables to bring, and the Weapons and Armor that work incredibly well for this Build. If you have been searching for ways to play as an assassin in which you successfully disable targets while dealing high Critical Damage, then this guide is for you.

Steelrising Dancer Class Guide: How to Build a Dancer

Compared to the Soldier and Bodyguard, the Dancer is tricky to play because of its low defensive stats in terms of HP and Armour so they get damaged more. As such, they are considered the most glass cannon class in Steelrising. What makes this a bit more challenging is they also engage with enemies in the melee range. To compensate for these weaknesses, the Dancer deals the highest number of critical hits because they are extremely quick on their feet. A high Agility Attribute makes it possible rather than focusing on raw Physical Damage alone. As a result, they also inflict Immobilisation Damage effectively. 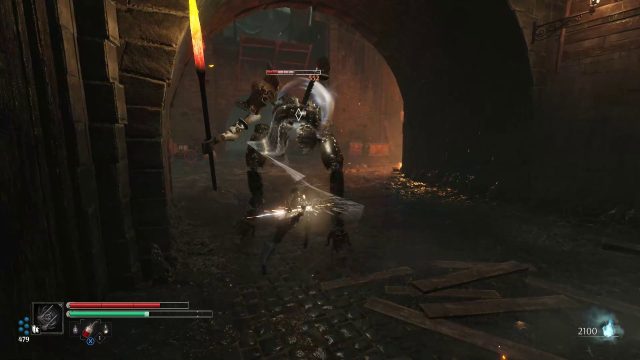 The way this Build works is that you will maintain an aggressive playstyle in which you will keep engaging with the enemies until they get immobilized. At the start, you need to predominantly execute light attacks and then switch over to charged heavy or heavy attacks after the Automats get disabled to conserve as much stamina as possible. But as you progress and invest more points into Vigour, this playstyle changes where you will be alternating between executing light and heavy attacks. Note that charged heavy attacks are not worth constantly performing due to their long attack animation. What we want to prevent is leaving the Dancer open to taking damage.

Remember that you need to manage your HP as well. You can do this by equipping light to medium-weight weapons, which feature Shield or Counterattack as part of their Special Moves. When you perform either action perfectly, you completely block or parry incoming attacks, respectively, so you do not get harmed in any way.

Character progression in Steelrising depends on the amount of Anima Essence you collect. When you have accumulated enough of this currency to level up, its color changes from blue to yellow, allowing you to at least invest in a single Attribute. For starters, the Dancer’s stat distribution is Agility +3 and Vigour +2. Agility boosts both Physical and Immobilisation Damage, which is quite similar to Power except that instead of knocking down Automats, you deal Impact Damage to completely render them useless. 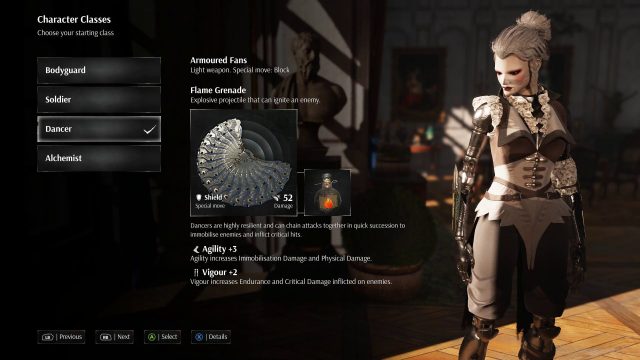 Immobilize goes hand-in-hand with wielding lighter weapons, allowing you to take advantage of your nimble assassin-like moves to efficiently disable foes while considerably destroying them in the process. And in this state, they become susceptible to taking 100% critical attacks so you can charge right in to finally finish them with ease.

Vigour, on the other hand, refers to your Endurance or stamina pool, which will be decent in the long run. This is an essential resource as the number of attacks you perform will depend on it. The goal for the Dancer is to always engage the enemy to swiftly max out their Immobilization gauge and to effectively disable them as a result. Not only do you take them out efficiently but you also stay protected since they won’t be able to fight back. 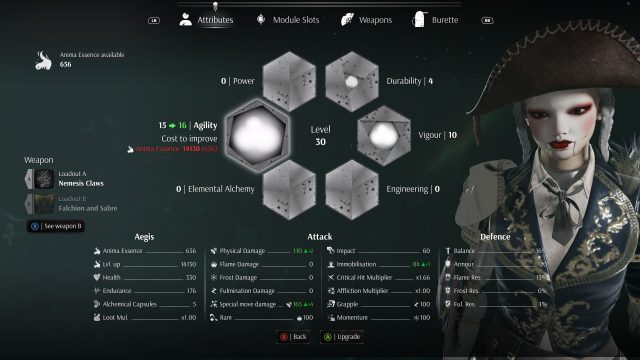 However, despite Vigour being one of your primary attributes, you will find stamina challenging to manage at the start due to how quickly it dwindles even when executing light attacks. To compensate for this, I highly recommend stacking up on Petrification Grenades. You can charge in, dodge, and then throw the grenade. These series of actions will most likely allow you to kill Automats with critical attacks as they remain immobilized.

Alternatively, you have the benefit of wielding weapons that allow you to Shield or Counterattack enemy hits. The latter is especially potent because of its block and damage reflect capabilities where the Physical Damage, which is supposedly dealt to you, is instead inflicted against them. Additionally, Vigour amplifies your Critical Hit Multiplier to deal greater Critical Damage within a few seconds of initiating combat. Overall, it is best to follow a 1:1 Attribute distribution between Agility and Vigour until you hit 10 points for each. This value is enough in terms of your max stamina pool. You will then continue allocating points into Agility to maximize Physical and Immobilise Damage. 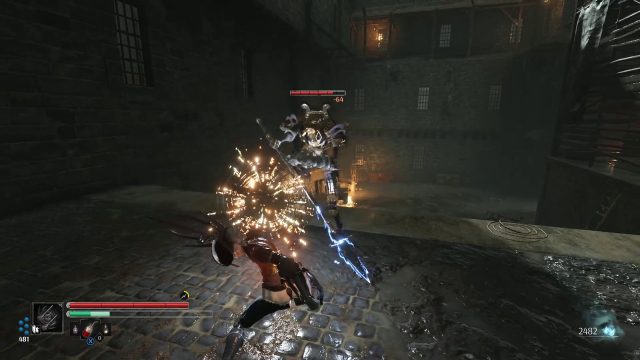 In addition to these two primary stats, you will need to invest in alternatives to further boost the effectiveness of your Dancer Build when it comes to survivability. You have the choice of putting 4 to 6 points into Durability or Engineering. Either option is decent since with Durability, you raise your max HP whereas with Engineering, you boost Armour and your loot multiplier to increase the chances of collecting grenades.

When you have saved up a decent amount of this in-game currency and progressed significantly in the game, you will need to equip the Grade III Destruction Module, which is purchasable from the Boutique. This significantly boosts Physical Damage, letting you destroy enemies much more efficiently. 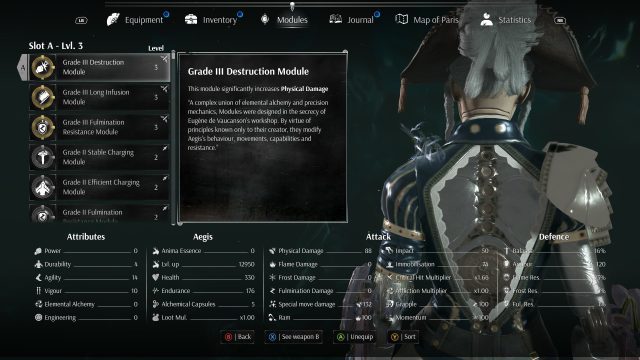 Next, and to survive longer in encounters, you will need to equip the Grade III Fortifying Counter or Grade II Critical Repair Modules. The first perk is a priority because it restores a significant chunk of your HP when you successfully perform Counterattacks whereas the second one moderately gives back a certain percentage of health when executing critical attacks. Regardless of whether you have invested in Durability or Engineering, either module would be beneficial in terms of staying on your feet and living to see another day. 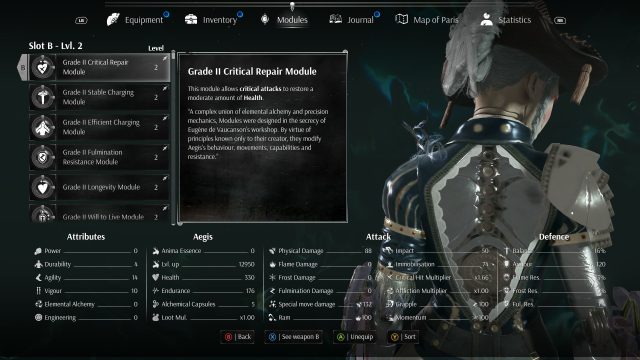 For the third slot, you should equip the Grade I Immobilisation Module to increase your efficiency when it comes to filling up the target’s Immobilization Gauge. What really goes well with this, and one that you ought to wear for the fourth slot is the Grade II Stun Module. Once you have disabled them, the period by which they stay incapacitated will be increased. As a result, you are granted more time to deal a great number of critical attacks, until you put them down for good.

In Steelrising, you can equip and switch between two weapons. Remember that regardless of the class you choose, you are not limited to the types available to you. For the Dancer, it is better to wield light or medium-weight weapons because of their decent Physical Damage and high Agility Affinity stats. As such, their corresponding attack animation is fast.

This class initially owns the Armoured Fans, which is a melee weapon that allows you to block incoming attacks for its special move. I recommend sticking with this until you get the hang of shielding yourself from taking damage because the same reflex is needed for parrying. You won’t be upgrading these fans since you will eventually switch over to your main weapon called the Nemesis Claws. Not only does this provide better range since you are not required to attack up close and personal but it also features greater damage potential. Rather than blocking, you will use this for parrying or counterattacking for a more offensive playstyle. 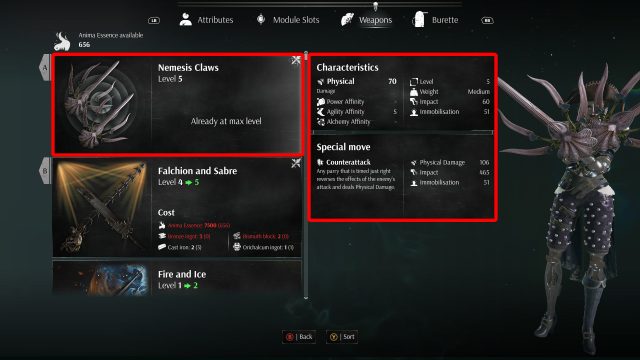 Nemesis Claws lets you immobilize enemies efficiently so the higher its upgrade, the faster you can disable them. Successfully counterattacking hits will protect you from taking any damage completely while retaliating and dealing powerful Physical Damage as a result. Similar to the Bodyguard’s Body of Work, you do not need to spend Alchemical Capsules to execute this action.

For the weapon’s charged heavy attack, you will perform a somersault and a twirl, followed by piercing the target with deadly claws. At higher levels, you can engage with them this way, and then, execute light and heavy attacks to manage stamina while effectively disabling Automats. I do not recommend jump attacks for this Build because they are not as strong as the rest of your other actions. It simply does not have the capacity to quickly fill up the Immobilization gauge.

For your secondary weapon, you should equip the Falchion and Sabre, which you get early on in the game. This is a powerful alternative against groups of enemies because of its special move known as the Blade Tornado. Here, you perform a spinning attack to deliver several hits at once. But remember that the targets should first be disabled, otherwise, they can interrupt you midway. What you should do is disable them using Nemesis Claws, and with the aid of Petrification Grenades if needed. 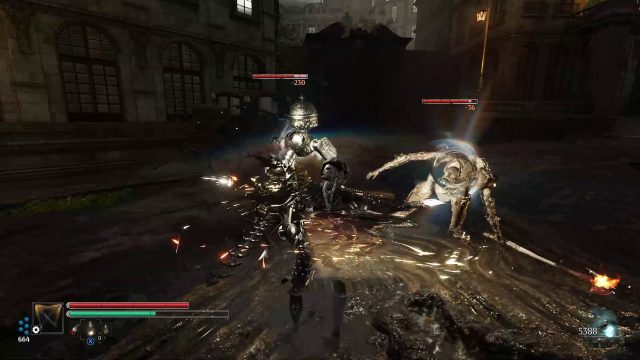 You will then immediately switch to the Falchion and Sabre to deliver the deadly Blade Tornado move and kill as many Automats as possible. Similarly, you don’t need to spend Alchemical Capsules but you will be consuming stamina to perform it.

Unlike weapons, you cannot upgrade armor in Steelrising so you simply equip them. For the Dancer, the goal is to balance Armour and Endurance for improved defenses and stamina pool, respectively. The following clothing pieces should considerably improve both stats: 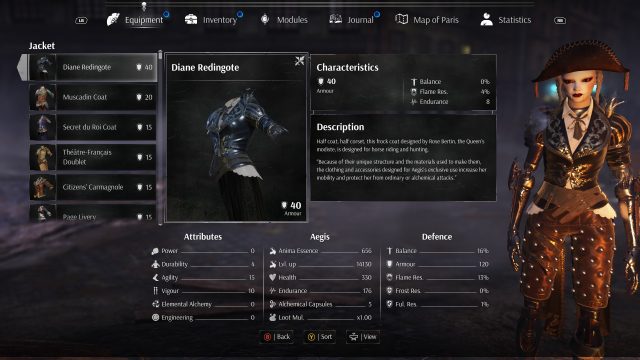 Next, you will want to focus on saving Petrification Grenades since these significantly increase the target’s Immobilization gauge. Once full, you can easily charge in to automatically deal critical attacks. If you have chosen to invest in Engineering rather than Durability, your Affliction Multiplier is enhanced, meaning, you boost the effectiveness of inflicting status effects. As such, it would also be a good idea to carry Flame, Frost, and Fulmination Grenades to debilitate Automats whether this involves dealing damage over time, freezing them, or amplifying the damage you deal, respectively. 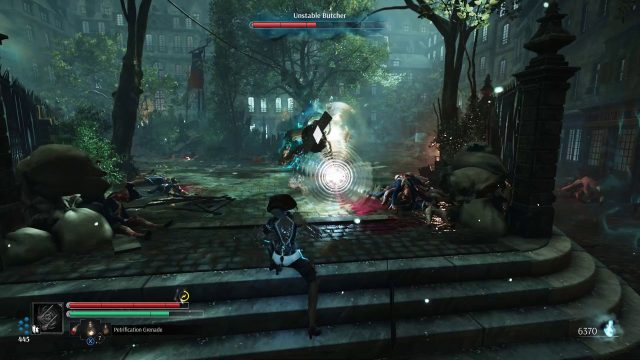 Playing as the Dancer may be challenging since both your HP and Armour are low. What you do have at your disposal is your impeccable Agility, high Critical Damage, and decent stamina pool. The latter is especially useful since your overall burst damage will not be as high but you have more significant sustained damage thanks to your numerous quick and critical attacks. With an aggressive combat style paired with powerful weapons, you are going to be a formidable opponent. 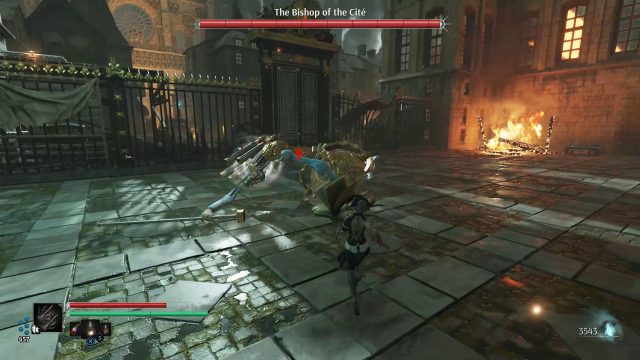 Next, you should consider wearing the Grade II Endurance Module while waiting for the Grade III Destruction Module to pop up in the shop. This, coupled with the Grade II Efficient Ventilation Module, will prevent you from triggering self-freeze, thereby leaving you vulnerable to incoming attacks. Momentarily staying still is risky for this class because of your naturally low defensive stats, meaning that you receive more damage compared to the others. The greater the stamina until you can boost your Physical Damage, the better.

Lastly, and among the 3 alchemical afflictions, Frost and Flame are the most useful because they allow you to freeze Automats in place and deal massive damage over time, respectively. When coupled with the Selenite Momentum and Alchemist’s Ram move sets, you can easily inflict these status effects, letting you slay them faster. 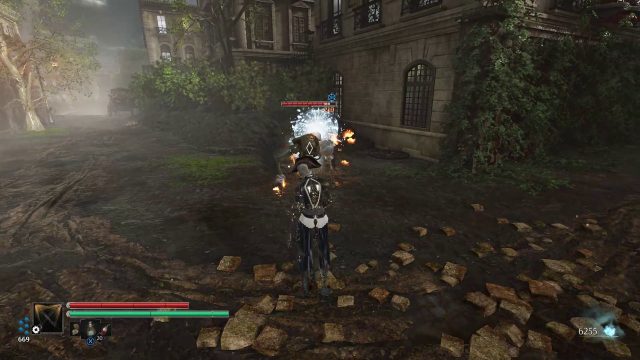