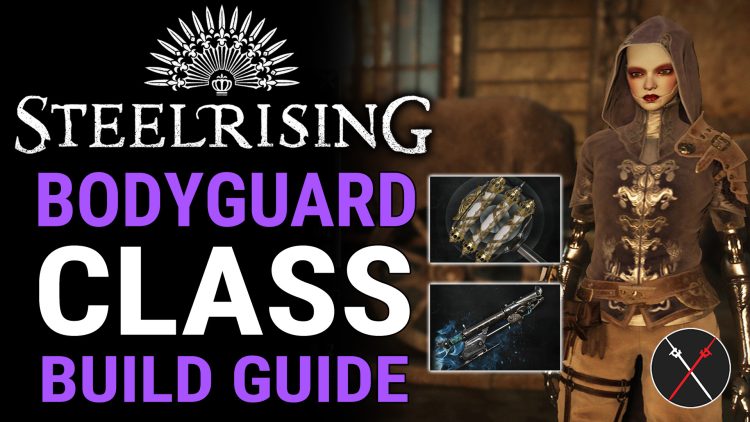 Steelrising Bodyguard Class Guide: How to Build a Bodyguard – In this Steelrising Bodyguard Class Guide, I’m going to show you my Bodyguard Build, which powerfully pulverizes enemies at point-blank range. I will share the Attributes you need to prioritize, the Modules you will have to equip, the consumables to bring, and the Weapons and Armor that work incredibly well for this Build. If you have been searching for ways to successfully stagger targets while managing to sustain damage from them, then this guide is for you.

Steelrising Bodyguard Class Guide: How to Build a Bodyguard

Alongside the Soldier, the Bodyguard is beginner-friendly because they can withstand taking huge damage from enemies. This is due to their impressive resiliency since their max HP and Armour are the highest compared to the rest of the classes. Not only is Aegis tanky but she is also able to inflict great damage really well. Note that you will not be limited to dealing only Physical and Impact Damage since you are capable of triggering Alchemical Afflictions faster thanks to your high Engineering Attribute. 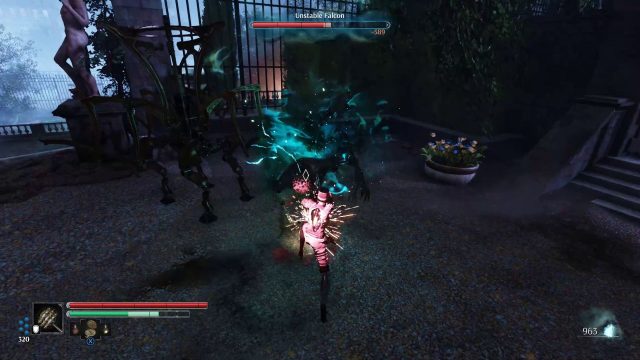 The way this Build works is that you will focus on executing heavy attacks the most since it does not consume as much stamina relative to jump and charged heavy attacks. Your Endurance or stamina, which corresponds to the Vigour stat, is low even from the beginning so you will want to be efficient in managing this resource to prevent freezing yourself in combat. Since the Bodyguard wields heavy-weight weapons, their attack animation will be much slower.

As such, in cases when the enemy is about to engage, it is best to perform a jump attack because this way, you avoid their incoming hits while dealing significant damage in the process. But remember that you do have the option to block with your weapon to absorb damage should you have little stamina left.

Character progression in Steelrising depends on the amount of Anima Essence you collect. When you have accumulated enough of this currency to level up, its color changes from blue to yellow, allowing you to at least invest in a single Attribute. For starters, the Bodyguard’s stat distribution is Durability +3 and Engineering +2. Durability boosts max HP and Balance for better survivability and stability, respectively. Balance refers to your ability to avoid being knocked down by the enemy’s heavy attacks. It also lets you recover efficiently after performing charged attacks yourself. 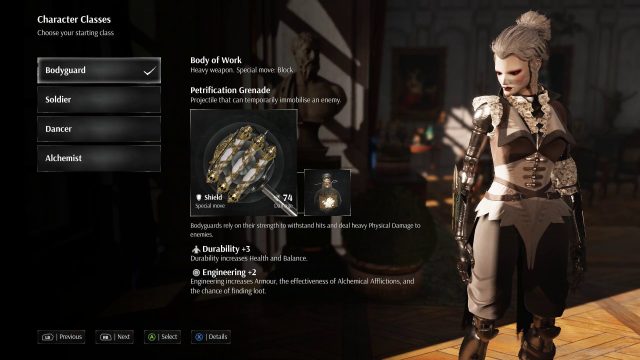 Engineering, on the other hand, boosts Armour, reducing the damage you receive. This attribute also improves the effectiveness of inflicting status effects such as Flame, Frost, and Fulmination, thereby allowing you to fill up the target’s Alchemical Affliction gauge faster although not as quickly as the Alchemist Class of course. Furthermore, it goes hand-in-hand with your increased chances of acquiring loot since you gain extra affliction-type grenades to effectively bring down hostile Automats.

For the Bodyguard Class, the Attribute distribution will be different because you must also focus on investing in Power. Durability and Engineering are well and good in the sense that they equip you with the proper tools to survive longer in encounters, however, they do not necessarily provide as much damage as expected. It is for this reason that you will additionally be allocating points into Power. With a high Power, you are able to considerably amplify your Physical and Impact Damage. Any type of attack you perform whether it be light, heavy, jump, or charged heavy attacks all contribute to this damage type on top of your weapons’ Power Affinities. 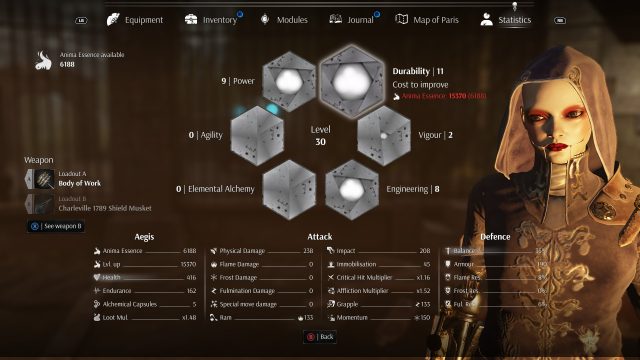 Meanwhile, Impact pertains to how effective you are at staggering and knocking down enemies, and this is made more feasible due to the weight of your armaments. Once they are disabled, these Automats, regardless of how big they are, become vulnerable to succeeding attacks, allowing you to efficiently obliterate them. Overall, a good Attribute distribution for Durability, Power, and Engineering is 1:1:1. When they reach 8-9 points each, you can then begin to boost the stat that you need the most, whether it involves raising your max HP, damage, or Armour.

Should you have extra points to spare, it would be a good idea to invest 2-4 points into Vigour at earlier levels to help manage your stamina better. During this time, you will frequently run into rapid cooling issues, increasing the probability of quickly filling up your Frost gauge. You can circumvent this by only engaging with the enemy when your stamina is more than half to avoid completely consuming it. Later on, when you progress further into the game, you will be able to equip Modules and armor that provide Endurance bonuses. 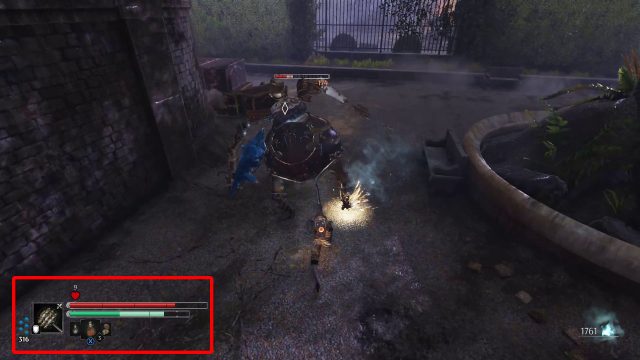 When you have saved up a decent amount of this in-game currency and progressed significantly in the game, you will want to prioritize equipping the Grade III Destruction Module that is purchasable from the Boutique. This significantly boosts Physical Damage, letting you destroy enemies much more efficiently.

Next, is the Grade II Efficient Ventilation Module, which is especially useful when your max stamina is still quite low. What this does is it reduces the level of Frost Damage you would otherwise accumulate when rapid cooling is initiated. More often than not, said action is inevitable since you will need to execute attacks and block enemy hits, so wearing a module that lowers this affliction helps the Bodyguard Build a lot. 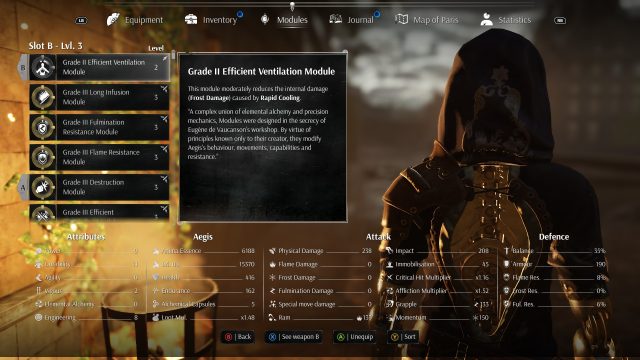 For the third slot, you can choose between the Grade II Longevity Module or Grade II Efficient Charging Module. Longevity increases your max HP, which is handy early on, whereas Efficient Charging amplifies Physical Damage when you successfully execute charged heavy attacks. I would recommend equipping the latter once you have placed enough points into Durability that you are comfortable with, so somewhere around 8-10 points. Furthermore, since additional stamina is needed to constantly perform charged attacks, you have to wear the Grade II Endurance Module by then. 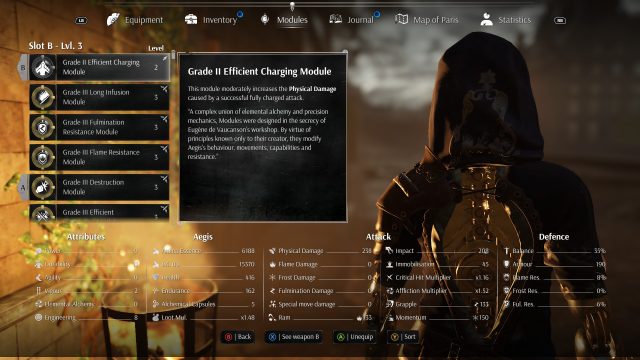 Last but not least, you ought to equip the Grade II Efficient Blocking Module even if your max stamina pool has already improved. This resource won’t be as good as the Soldier’s since you will not primarily invest in Vigour. So the goal is to efficiently manage it the higher your level becomes. Doing so lets you focus on dealing massive Physical Damage and staying alive in fights.

In Steelrising, you can equip and switch between two weapons. Remember that regardless of the class you choose, you are not limited to the types available to you. For the Bodyguard, it is better to wield heavy weapons because of their high Physical Damage and Power Affinity stats.

This class initially has access to Body of Work, which is a multi-functional melee weapon. Not only does it act like a brutal hammer, allowing you to slam and knock down foes with ease, but it also performs as a shield to absorb 100% of the damage dealt by them. Body of Work is extremely powerful due to its excellent Power Affinity and Impact Damage. Plus, unlike the Soldier’s Gribeauval Halberd, you do not need to spend Alchemical Capsules to activate its special move, which is to block incoming hits. 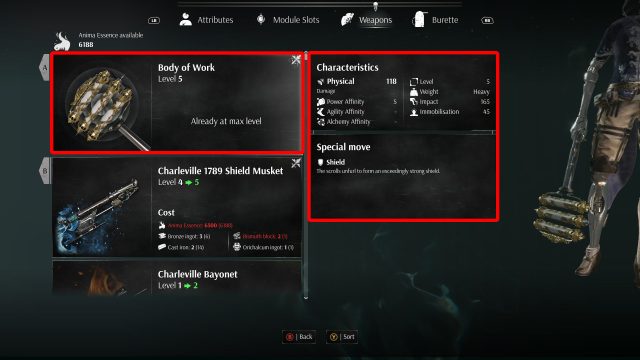 For the weapon’s charged heavy attack, you will be heaving it upward and then slamming it against the enemy to crush them under this Mjolnir-like hammer. Meanwhile, you will be performing heavy attacks frequently to manage your stamina and to disrupt targets before they even cause you harm. However, the caveat to wielding Body of Work is its heavy weight. As a result, your action’s animation becomes very slow so if you are preparing for your charged heavy attack, for example, you can easily get interrupted by your target when you are within reach. There are two ways to counter this – you can either block their hits or perform jump attacks.

The Bodyguard’s jump attack is quite similar to their charged attack in terms of the heaving and slamming motion but it is a bit faster to execute. Here, you are able to avoid the enemy’s damage while successfully retaliating in the process. But because it consumes more stamina than your charged heavy attack, you will need to use this in conjunction with shielding yourself from taking damage to manage Endurance levels. Overall, you can never go wrong with Body of Work because of how potent it is at dealing tremendous amounts of damage on top of disabling Automats.

For your secondary weapon, you should equip the Charleville 1789 Shield Musket, which you get early on in the game. Inflicting Frost is very strong in Steelrising considering that your Affliction Multiplier is decent because doing so lets you freeze enemies in place for several seconds. This allows you to switch to your heavy weapon to then butcher them into pieces without interruption. Firing the Shield Musket will not deplete stamina, and instead, it consumes Alchemical Capsules. 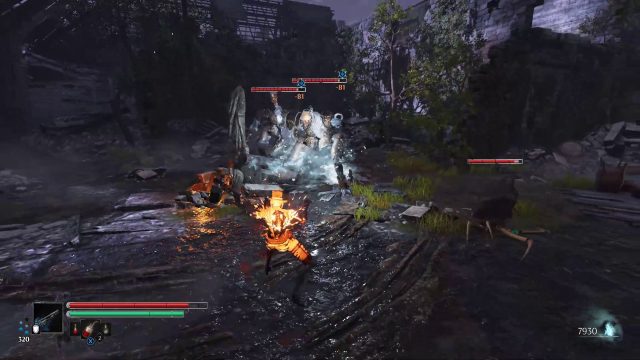 It shouldn’t be a problem because of your notable loot multiplier from having a high Engineering Attribute. Additionally, this weapon can be used together with dashing towards the enemy once the Selenite Momentum action has been unlocked to freeze them quicker.

Unlike weapons, you cannot upgrade armor in Steelrising so you simply equip them. For the Bodyguard, the goal is to boost Endurance as much as possible since you already get enough Armour from Engineering. The following clothing pieces should considerably improve both stats: 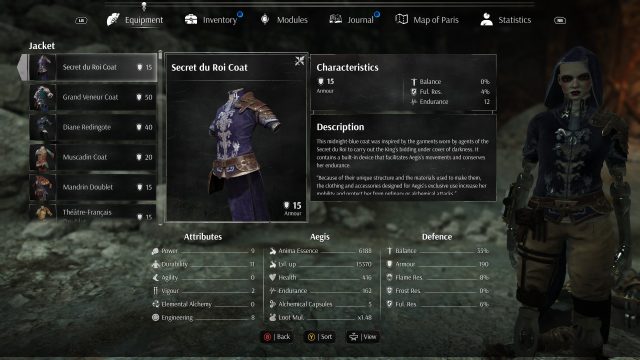 Next, you will want to focus on setting off Explosive Grenades as well as Flame and Frost Grenades against any type of Automat such as Unstable Mini-Bosses and Titans. Explosive Grenades stagger and knock them down sometimes, leaving them vulnerable to the massive attack power brought about by Body of Work. Meanwhile, Flame and Frost Grenades allow you to deal damage over time and freeze them, respectively, and are considered the two top status effects in the game. 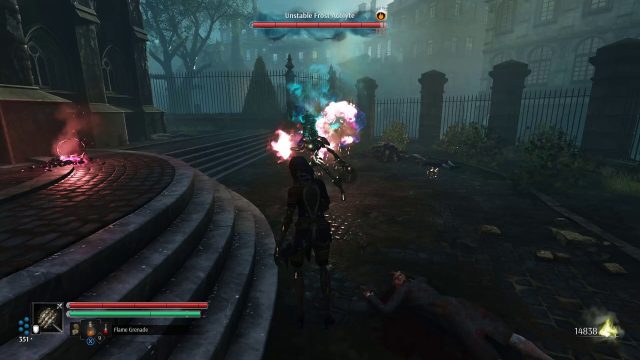 Playing as the Bodyguard lets you absorb damage entirely due to Body of Work’s special move, Shield, thereby bolstering your survivability. Although your stamina pool is less compared to the Soldier, you still manage to deliver lasting and impactful blows due to the Endurance bonuses granted by the Modules and armor you wear. In terms of damage potential, this class excels because of the substantial Physical and Impact Damage they deal as well as the status effects they can inflict, making them a must-try for beginners. 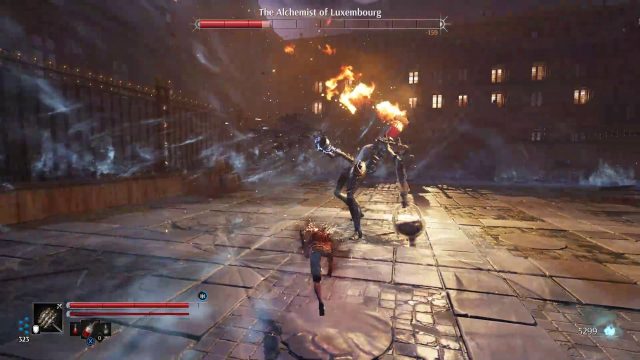 There are instances when you fight targets who deal Frost Damage. More often than not, they are resistant to the Freeze Affliction so your Charleville 1789 Shield Musket will not be as effective. One option is to throw Flame Grenades to deal damage over time on top of using Petrification Grenades to immobilize them, giving you the perfect window to heavily strike these Automats into smithereens with Body of Work.

Lastly, and since you have no issues with accumulating alchemical affliction-type grenades, you can decide to wield the Volley Mallet in place of the Shield Musket. This is another heavy weapon that deals considerable Physical and Impact Damage due to its Volley of Gunfire Special Move in place of blocking incoming attacks. Here, you unleash a devastating explosion to disrupt enemy formations while knocking them down. 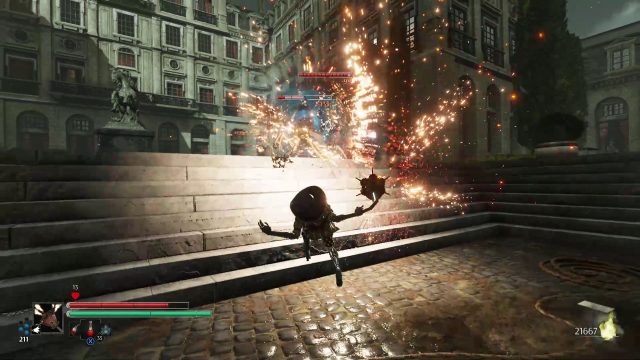