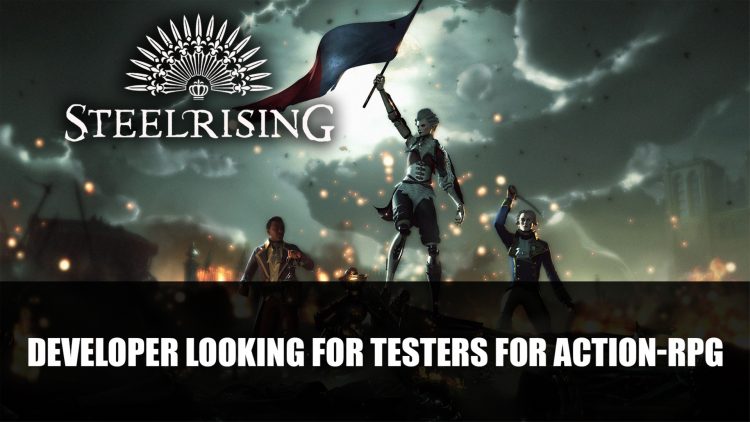 Spiders the developer behind games such as Greedfall is looking for testers for their next major Action-RPG Steelrising, a game about French Revolutionary robots.

The developer Spiders is working on their next project Steelrising, an Action-RPG set in an alternative universe during the French Revolution but with robots. If any of that description has piqued your interest, you may be interested in helping to test the game. Spiders has announced they are looking for testers to sign up and experience their new game, of course you will need to sign an NDA if you’re successful, and fill in a Google Doc. As for how many testers and the exact completeness of the game is unknown.

The application form asks applicants to share their experience of playing other Action-RPG games such as the Dark Souls series, Bloodborne, Greedfall, as well as other titles such as Sekiro: Shadows Die Twice and Assassin’s Creed Unity. You will also need to state your current platforms that you play on. While the details about the game are still few at the moment, the Steam page along with this application form seems to be striving in the direction of a souls-like, single-player RPG. The concept art combines dark fantasy with the backdrop of 18th century France.

For Steelrising, we recreated some of Paris monuments such as the Grand Châtelet or the Tour du Temple that characterised the French Revolution period.

In case you missed it, Steelrising was announced last year at the Nacon event, a game set during the French Revolution about King Louis XVI’s automaton army which is terrorising the citizens of Paris. In this retelling, players will get to change the course of history. Safe to say the plot is quite unique, and if you’ve played Greedfall, you’ll know Spiders has a way of weaving stories. If you want to be part of shaping the game, you can sign up to be a tester on the official Steam page.

The Revolution begins in the shadows… Now is the time for it to come to light.

We are excited to announce our first Steelrising Playtest!

Click the link below to participate and get more details about the Playtest.https://t.co/5ya46ywHaK@spidersgames pic.twitter.com/FseI1zU3qB

Steelrising currently has no release date but will be releasing on  PC and next-generation consoles.

For more news, be sure to check out next Outriders Will Be Available On GeForce Now During Demo And At Launch and NieR Replicant Ver 1.22 Gets 9 Minutes Of Gameplay Featuring The Barren Temple.