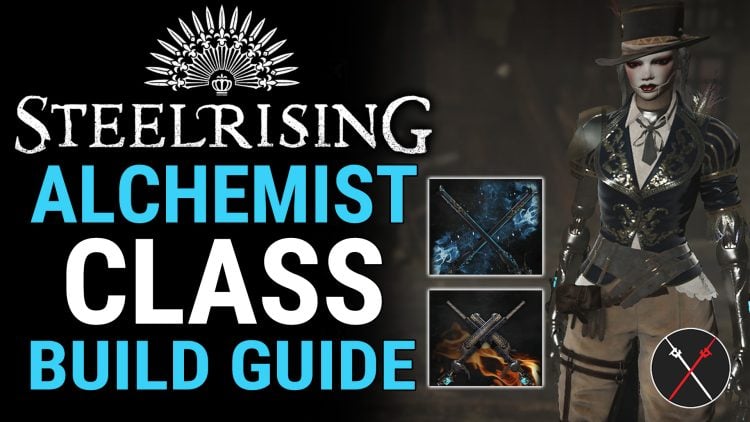 Steelrising Alchemist Class Guide: How to Build an Alchemist – In this Steelrising Alchemist Class Guide, I’m going to show my Alchemist Build, which destroys enemies up close and personal by effectively inflicting alchemical afflictions. I will share the Attributes you need to prioritize, the Modules you will have to equip, the consumables to bring, and the Weapons and Armor that work incredibly well for this Build. If you have been searching for ways to play like a mage-like character by taking advantage of elemental forces to deal great damage, then this guide is for you!

Steelrising Alchemist Class Guide: How to Build An Alchemist

Similar to the Dancer, the Alchemist takes some practice to get used to, especially at the beginning, not because of their defensive stats but more of their melee range playstyle. They are also not adept at dealing Impact and Immobilisation Damage, which means that they are not efficient in knocking back and stunning Automats, respectively. But what makes this class shine is their ability to deal the most Elemental Damage compared to the others because of their high Elemental Alchemy Attribute. 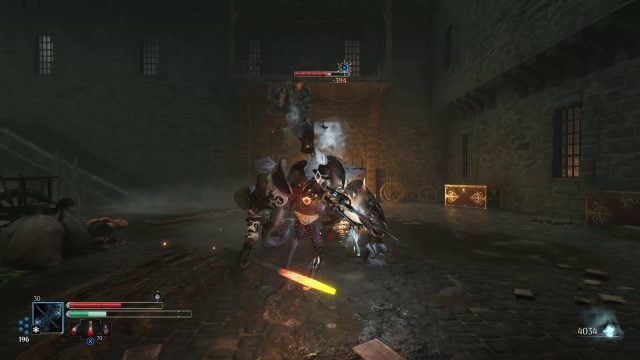 The way this Build works is that you will first infuse your weapons with certain afflictions, may it be Frost, Fire, or Fulmination, and then predominantly execute light attacks in order to manage your Endurance or stamina pool. Since Vigour is not one of your primary stats, you will have to learn to balance your actions well. When you have enough stamina, which is also obtained from the gear you wear, you should then alternate between performing light and heavy attacks to increase the damage dealt. Similar to Dancers, your attack animation is fast since you wield medium-weight weapons.

Additional reasons to manage stamina are to keep moving around in encounters. Since you won’t use weapons that provide you with Shield and Counterattack Special Moves, you will need to target the enemy’s back and sides to deal optimal damage while dodging their attacks from time to time. Even if your Armour is decent, your max HP is minimal so you will still end up absorbing hits.

Character progression in Steelrising depends on the amount of Anima Essence you collect. When you have accumulated enough of this currency to level up, its color changes from blue to yellow, allowing you to at least invest in a single Attribute. For starters, the Alchemist’s stat distribution is Elemental Alchemy +3 and Engineering +2. Elemental Alchemy amplifies Alchemical or Elemental Damage from your weapons and grenades. Furthermore, your resistance to taking the same damage is equally boosted. This means that you are not as vulnerable to Frost, Fire, and Fulmination, even if you get attacked with these afflictions, so your corresponding gauges take longer to fill up. 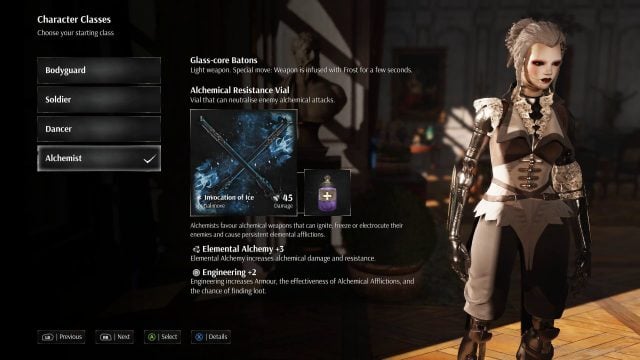 Engineering, on the other hand, boosts Armour, reducing the overall damage you take may it be related to the 3 status effects we have talked about or even Physical Damage. This Attribute pairs extremely well with Elemental Alchemy since you enhance your Affliction Multiplier and therefore the effectiveness of your weapons’ respective Infusion Damage. For instance, as long as the affected targets are burning, they take significant damage over time until their affliction meter decreases to 0.

Moreover, your chances of obtaining loot increase, which is great considering that you will constantly need larger amounts of Alchemical Capsules to coat your weapons with the different elements available in Steelrising. Overall, a good Attribute distribution for Elemental Alchemy and Engineering is 1:1 so you should equally invest points into both. 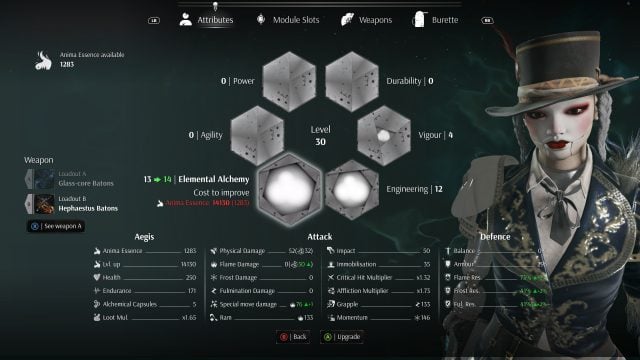 In addition to these two primary Attributes, you will want to invest in alternatives to further amplify the effectiveness of your Alchemist Build. Since your Armour is already high, it is ideal to focus on improving Endurance by allocating at least 4-6 points to Vigour rather than Durability.

Having lower HP will not be an issue as long as you have enough stamina to dodge and jump above Automats. And you do not really need Balance since you are not wielding heavy weapons, nor will you be executing charged heavy attacks frequently. While benefitting from having a relatively higher stamina pool, you also gain a bonus on your Critical Hit Multiplier, letting you deal better Critical Damage to put targets down quickly. 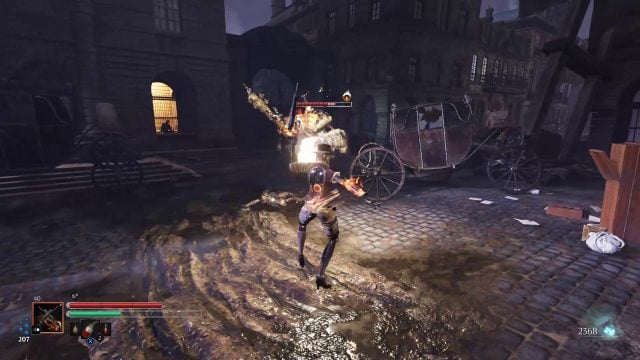 When you have saved up a decent amount of this in-game currency and progressed significantly in the game, you will need to equip the Grade III Long Infusion Module, which is purchasable from the Boutique. This considerably increases the duration of your weapons’ alchemical infusions, preventing you from triggering them often and spending too many Alchemical Capsules as a result. 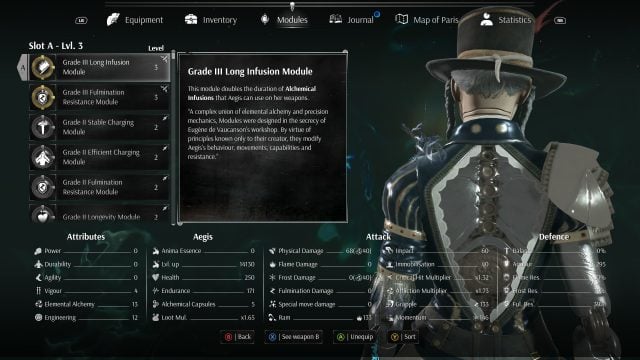 Next is the Grade II Endurance Module, which is required for the Alchemist Build as it notably improves your max stamina. Therefore, you can perform more attacks to eliminate enemies faster. This becomes available at the Boutique after some time so be sure to purchase its lower-tiered version first until the upgraded one appears.

For the third slot, you ought to wear the Grade II Lasting Affliction Module to raise the duration of your alchemical afflictions. What happens is that the target is ignited longer, for example, taking more damage collectively over time. Or they can also be subjected to freeze, allowing you to make numerous light attacks to slay them for good. 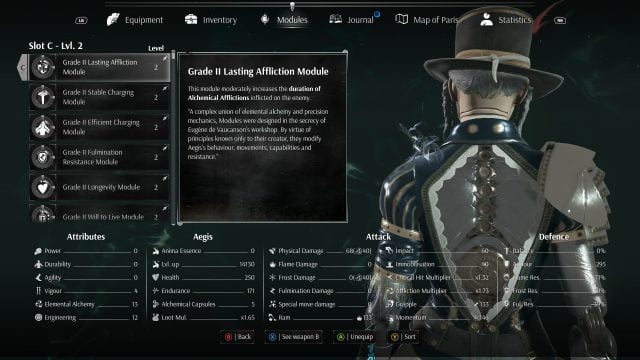 If you still have not discovered this module through exploration, you can equip the Grade I Unstable Essence Module in the meantime. This perk is beneficial at earlier levels while your Engineering Attribute fluctuates between 3-6 points since your Loot Multiplier is rather low at the time. What the Unstable Essence offers is an increased chance to redeem your recently consumed Alchemical Capsules so you can infuse your weapons without delay.

Last but not least, you ought to equip the Grade I Frost Catalyst Module or Grade I Flame Catalyst Module. Choosing one over the other ultimately depends on your preference but I find the Frost Catalyst more useful in order to quickly freeze enemies in place. As such, I have the time and space to deal as much Elemental Damage as possible while staying alive longer.

In Steelrising, you can equip and switch between two weapons. Remember that regardless of the class you choose, you are not limited to the types available to you. For the Alchemist, it is better to wield medium-weight elemental weapons because of their high Alchemical Affinity stats, allowing you to inflict status effects fast and with ease.

This class initially owns the Glass-core Batons, which is a melee weapon that lets you infuse Frost as the special move. As such, you deal Infusion Damage, making your swift blows against them much more lethal. Another reason why it is a good armament to retain is that the Glass-core Batons grant additional Physical Damage on top of the Power Affinity stat so can effectively hammer enemies until they die. 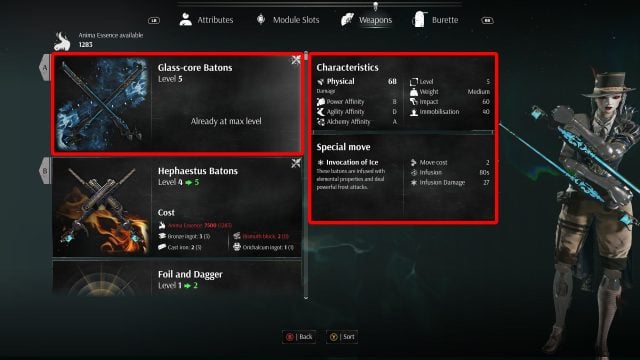 For this weapon’s charged heavy attack, you will spin both Batons while staying in place, followed by plowing forward to deal damage against a target. But note that this damage is not high compared to a series of light and heavy attacks combined, plus, you consume more stamina with just a single hit so I highly suggest doing away with it.

Moreover, while in this stance, you become highly susceptible to getting interrupted since charged heavy attacks have a long prep time. You certainly do not want to make it easy for your enemies to swarm you! Instead, 65% light and 45% heavy attacks would be the best spread for the Alchemist Build. Remember that you also have access to the Selenite Momentum action to freeze hostile Automats faster.

For your secondary weapon, you should equip the Hephaestus Batons, which already has a high Alchemical Affinity at level 1 and one that you get midway in the game. Rather than dealing Frost Damage, you deal Flame Damage, thereby igniting enemies over some time. This damage type is extremely effective because it helps you slay them quickly. 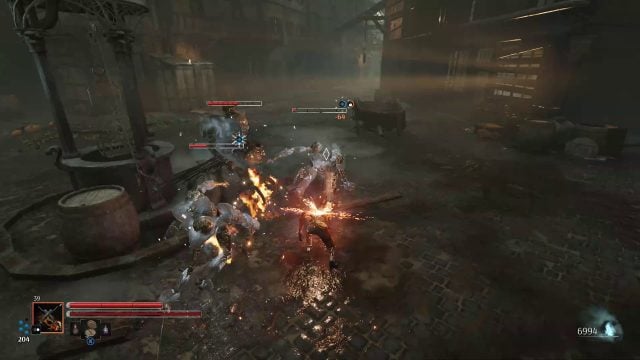 By upgrading the Hephaestus Batons, the time at which Flame remains to be infused together with the Infusion Damage dealt thereafter are significantly enhanced. Moreover, since you can inflict Frost and Flame at the same time, I suggest freezing Automats first and then burning them to a crisp so they do not retaliate while you are filling up their Flame Gauge.

For this weapon’s Special Move, you will be shooting flame projectiles using Alchemical Capsules instead of consuming stamina, and only after will it be coated with fire. Similar to the Glass-core Batons, the Hephaestus Batons can be used in conjunction with Alchemist’s Ram to quickly ignite the target.

Unlike weapons, you cannot upgrade armor in Steelrising so you simply equip them. For the Alchemist, the goal is to boost Endurance while improving Armour further to survive longer in combat. The following clothing pieces should considerably raise both stats: 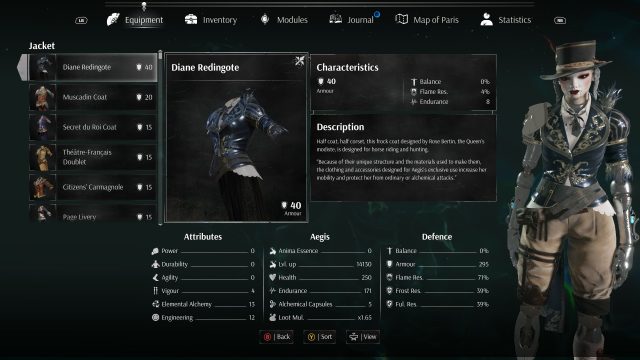 Next, you will want to focus on setting off Frost and Flame Grenades to maximize your efficiency when it comes to inflicting these status effects, especially against Unstable Mini-Bosses and Titans. You ought to also bring Explosive Grenades because these are very powerful in dealing huge Physical Damage while staggering Automats in the process, leaving them susceptible to your succeeding elemental attacks.

Playing as the Alchemist lets you absorb some damage without getting killed easily because of your decent Armour and elemental resistances. This Build is also aggressive so as long as you keep zipping from one point to the next while targeting the enemy’s back and sides, you will make it out alive. Although your stamina pool is lower than intended, you can continue to deliver lasting and impactful Infusion Damage coupled with its respective status effects to effectively disable and burn Automats over time. Rather than dealing burst damage, you will be adept at inflicting sustained damage using Frost and Flame-coated weapons, which are stronger than Fulmination. 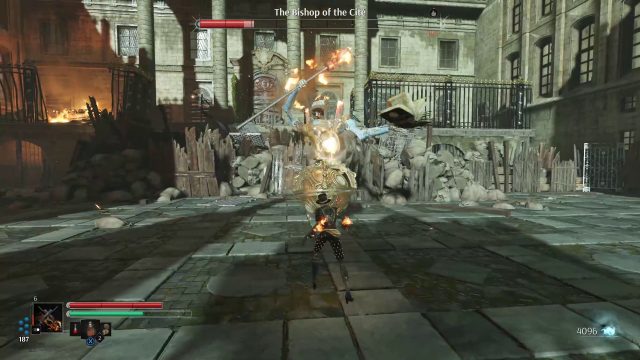 Next, you can substitute the Glass-core Batons for the Charleville 1789 Shield Musket, which is obtainable early on in Steelrising. The latter is a ranged weapon, allowing you to shoot and freeze enemies from a distance. Although it deals less overall damage than the Batons, you are able to completely shield yourself from incoming attacks. If you prefer a push-and-pull type of playstyle, then the Charleville 1789 Shield Musket is what you ought to wield.

Another alternative to the Glass-core Batons is Fire and Ice, which is also a melee weapon. What’s cool about it is you can freeze and ignite targets simultaneously. The tricky part, however, is getting used to performing parries or counterattacks. Once done perfectly, you considerably increase your enemies’ affliction levels, bringing them closer to destruction. You can even substitute the Grade III Long Infusion Module for the Grade III Fortifying Counter Module when using Fire and Ice if you are having issues maintaining your HP. Fortifying Counter restores a portion of your health upon successfully executing a Counterattack. 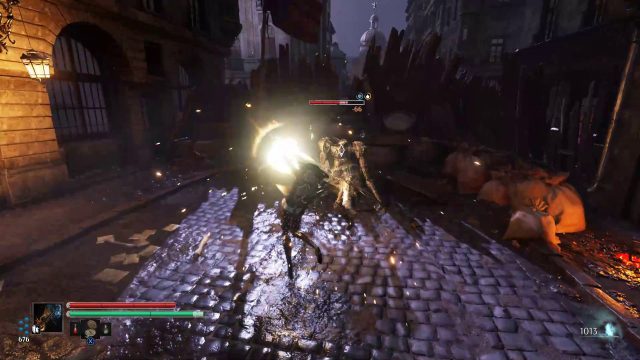