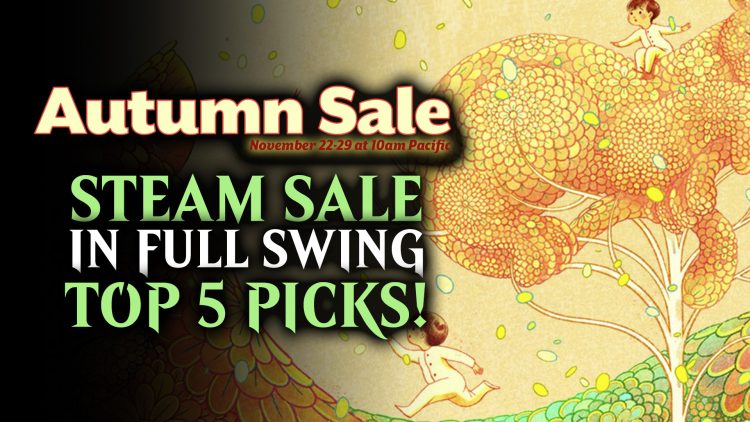 Steam Sale Autumn Edition kicks off with great deals, including some newly added all-time lows. Here are our top 5 picks!

Steam Sale Autumn Edition is in Full Swing this Weekend

The Steam Sale this Autumn and Black Friday period has started in full swing! This is actually a huge moment for Valve, as they have just recently started consistently sending out Steam Decks to adoring fans. The great set of gaming hardware getting into the hands of so many people is sure to set a large precedent in the number of sales that the Steam platform will make.

Up next are five of our best picks for this season’s Steam Sale! The entire sale runs from now up until November 29, at 10:00 AM PST.

The Witcher 3: Wild Hunt – Game of the Year Edition

Ever since The Witcher 3’s release in May 2015, the game has been making headlines with its unforgettable and heart-wrenching storylines, open-world design, and the impactful choices players can make. Oftentimes, the fantasy universe and the way in which characters are brought to life, continue to be the RPG’s defining moments. 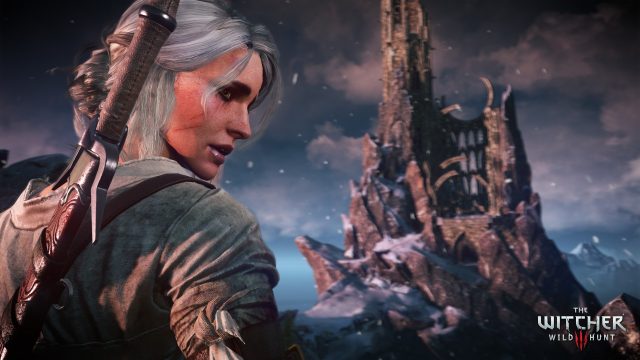 Witcher 3 Game of the Year Edition in the Steam Sale

In this Steam Autumn Sale, the Game of the Year Edition is currently at a whopping 80% off, which is its lowest discount, amounting to only $9.99. This is an excellent price point considering that PC players can also experience the game’s free next-gen upgrade starting on December 14! If you’ve wanted to play The Witcher 3, now’s the perfect time to buy it!

The upgrade will include a photo mode together with the ability to cross-save between multiple platforms like PC, PlayStation 5, and the Xbox Series X|S. You even get DLSS, FSR, and Ray Tracing added into the mix, for good measure. With an RPG this amazing, I’d wager that playing it on multiple systems is worth your time. 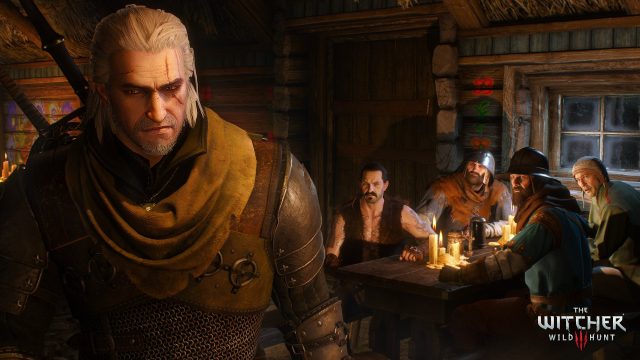 Prepare to Look Even More Next-Gen in December

If you’re a fan of the Netflix series, then you’re in for a treat because you can don costumes seen in the show as well as take a unique quest to obtain Geralt or Henry Cavill’s gear! Go and treat yourself by tossing a coin to your Witcher. Oh, and for some reason, the questionable Nilfgaardian armor design from the show’s first season makes its way into the video game.

Monster Hunter Rise is the action-adventure for you if you enjoy slaying monsters and cutting out their body parts! Don’t worry, it’s not as gruesome as it sounds. The game’s price is at an all-time low of 50% off, which is equivalent to USD 19.99. 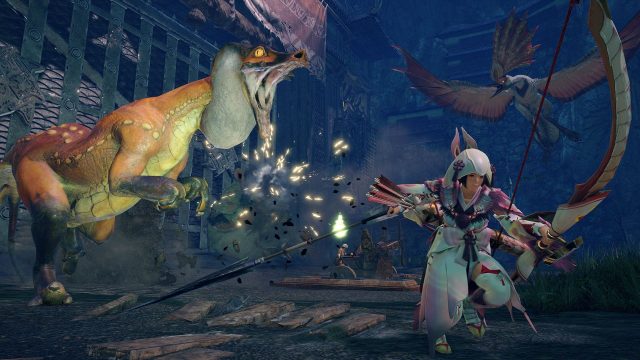 Monster Hunter Rise is considered a great entry into the Monster Hunter franchise regardless of whether or not you’ve played them before. Not only are the combat mechanics and RPG elements of the game beginner-friendly, but there are also new gameplay features that will keep you invested for hours on end.

These features include the introduction of the Palico and the Wirebug Mechanics. Like the Palamute, the Palico will stay by your side to help you attack monsters by choosing their specializations. They can executive offensive actions or remain on the sidelines to restore your health as needed. These cute buddies also act as your mount, allowing you to travel more quickly to complete your hunts efficiently. 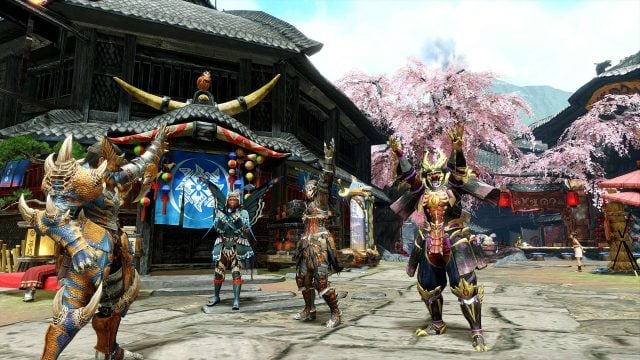 Slay Monsters and Turn them Into Fancy Hats

Next is the Wirebug Mechanic, which lets you reach new heights, and I mean literally. You can think of it as a grappling move to traverse tall cliffs. This also provides another option to attack enemies from the air. Consequently, each weapon has its distinct wirebug movesets, making combat much more fast-paced and fluid than ever before! If you’ve been waiting for Monster Hunter Rise to go on sale for a few months now, then I highly suggest getting it while the price is low!

Monster Hunter Rise also just very recently got its free Title Update 3 which added tons of new features, monsters, and more. The Sunbreak expansion is also on sale, for $29.99.

The Yakuza series may seem like a daunting franchise to get into because there are so many titles out there. Despite being the seventh game, Yakuza: Like A Dragon stands on its own, which means you’re not forced to have played the previous ones to fully understand the story. There are some throwbacks pertaining to the characters but the majority of it is self-contained. Currently, the price is USD 20.99 at a 65% discount! 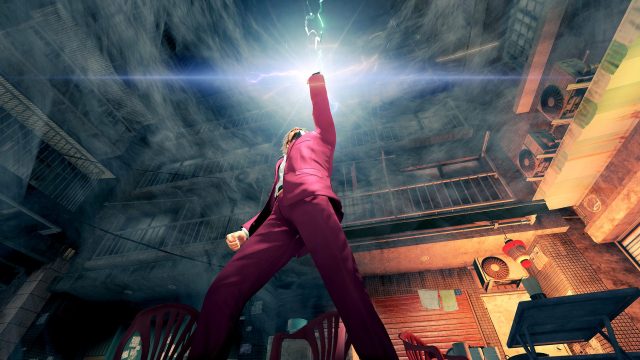 By the Power of Greyskull, HO!

In Yakuza: Like A Dragon, you play as Ichiban Kasuga who is out for vengeance and searching for a man who left him for dead. What makes this JRPG stand out from its predecessors is the newly implemented turn-based combat, which is comprised of a four-person team, versus the brawler-type encounters of previous games. This in itself is also unique because you can utilize the objects around you, meaning you can opt to through a trashcan or even a bicycle at your target. 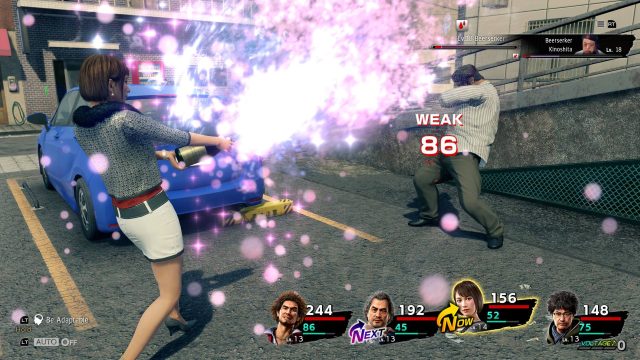 However, similar to the previous Yakuza games, you are encouraged to take on sub-stories to lighten up your experience. Examples include singing in karaoke bars and participating in kart racing. Whether you’re new to the Yakuza series or a long-time veteran, you certainly won’t regret giving Yakuza: Like A Dragon a try!

Next up on the list of noteworthy Steam Autumn Sales is the Mass Effect Legendary Edition. For a mere $19.79, you will get three full games that have been enhanced to meet most modern standards. Put on the shoes of the legendary Commander Shepard who leads a crew of humans and aliens throughout the galaxy. 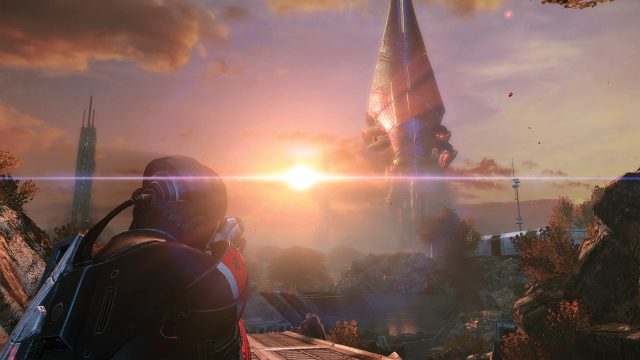 This amounts to about 100 hours of content, for most players. Here, folks will be able to make difficult choices, and see their outcomes immediately, or even down the line in the sequels. Shepherd will forge bountiful relationships, and even participate in memorable firefights. 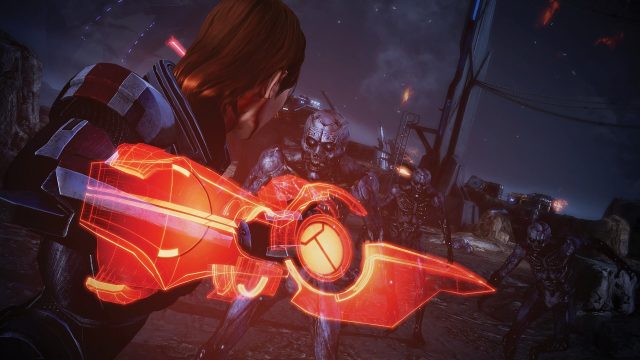 The Mass Effect Legendary edition is the definitive experience if you want to explore the universe, and beyond. The Mass Effect Legendary Edition makes it so the entire trilogy is playable through one singular launcher. All three games have received a facelift, especially the first game. Maximum resolutions have been bumped up to 4k with an unlocked framerate. You even get enhanced lighting, 21:9 monitor support, and all the DLCs ever released.

Last on the notable discounts for this season’s Steam Sale is Persona 5 Royal. The 30% price discount is actually a bit surprising since the title was released on Steam just over a month ago, on October 21. This puts the game at a respectable $23.99 which is definitely not bad considering the amount of gameplay you get with this package. 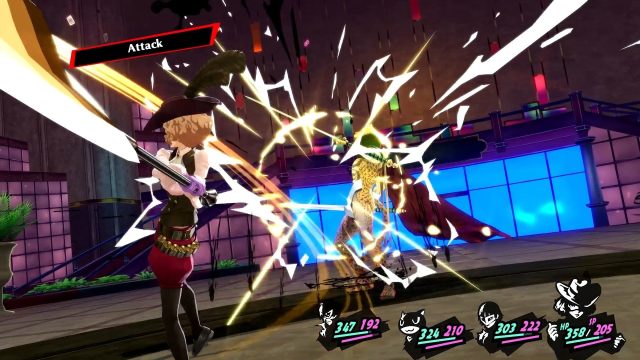 For those unaware, Persona 5 Royal was a previous PlayStation exclusive back in 2020. Even further back, the original game was released in 2016. The game is a turn-based RPG that takes place in Tokyo. It follows in the footsteps of student-slash-vigilante Joker, as he goes through his days and night as a high school student. 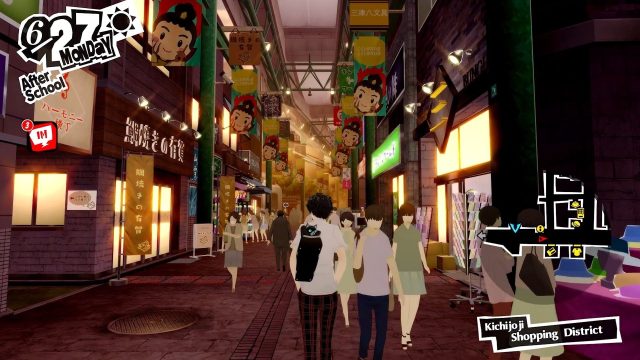 He thus goes through the motions of everyday life, taking on part-time jobs, forging relationships, and other activities. Things get extreme, however, as the game also switches into dungeon crawling with extremely stylish enemies and animations. Expect at least 100 hours of playtime on your first try, and possibly more given the good replay value.

All Hands on Deck with the Steam Sale!

The Steam sale this Autumn season is looking quite good for Valve. They recently started consistently sending out their handheld, the Steam Deck, which actually got a Golden Joystick Award for best hardware. Speaking of the excellent Steam Deck, all of the games above play flawlessly on the Deck, giving players amazing experiences that can be had on the go.

For more news, check out Elden Ring the Board Game Utterly Smashes Its Kickstarter Goals, and Pokémon Violet and Scarlet Sells a Massive 10m Copies in 3 Days of Launch.