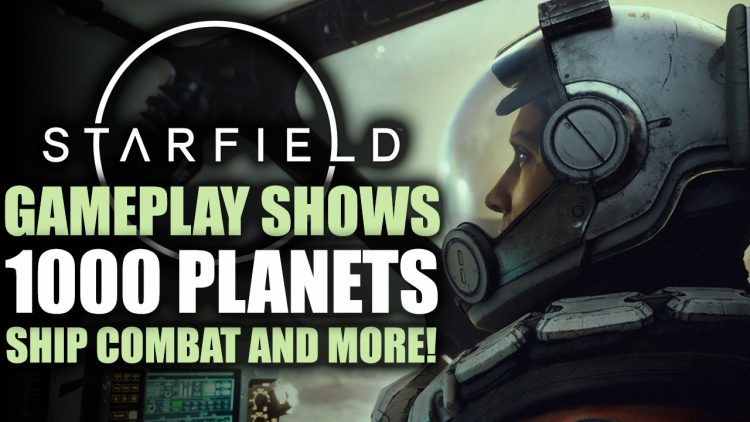 Starfield finally has actual gameplay footage! After months and months of teasing, this year’s Xbox + Bethesda showcase gave us a first look at how the highly anticipated game will play.

Thanks to this year’s Xbox + Bethesda game showcase, we finally know what Starfield will look like. More importantly, we have gotten a few minutes of actual gameplay, and wow does it look good.

The official gameplay reveal was just under 15 minutes long but each and every second oozed content. There’s an absolute ton of stuff to unpack here, so let’s dissect what we found out!

Starfield will retain its ability to switch from first-person to third-person perspectives, just like Bethesda’s prior works. The Elder Scrolls and Fallout games have been somewhat self-contained in smaller regions or countries. However, this time they have totally gone out into the atmosphere as the sky’s (literally) the limit. 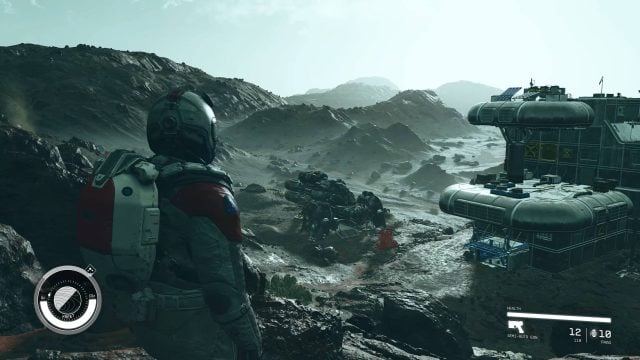 Explore the Planets on Foot

Todd Howard has confirmed that there will be over 1000 planets to explore, divided into just over a hundred different star systems. Based on the footage, there will be so many different zones that have a unique look or feel to them.

We can see that there are desert planets, areas filled with ice, Cyberpunk themed towns, vast ridges filled with various mineral deposits, and more. There are so many assets that, along with the well-done lighting engine, will help keep areas looking fresh and unique.

On the other hand, having this many explorable worlds does raise some concerns with some worried fans. Creating a playable space for this sheer amount of planets would take hundreds, if not thousands, of manpower hours. Unless the areas have been procedurally generated and randomization is also a part of setting them up. 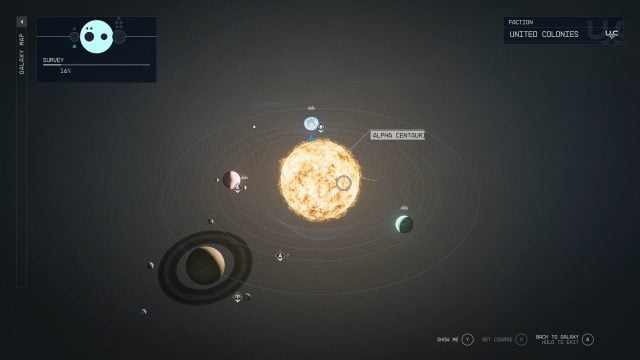 It will be interesting to see how Bethesda will tackle this. 1000 planets won’t be a selling point if only a small fraction of them are worth exploring. Perhaps Howard has an enhanced Radiant Quest system implemented that will create some truly memorable stories if a bit randomized.

Even further, some point out that having 1000 planets would make this truly a modder’s dream. This would give modders unprecedented freedom in creating their own playgrounds out of the way of most of the game’s main stuff. We do know that modding and Bethesda games go hand in hand, as even Morrowind is still chugging along as it still receives fan-made content from time to time.

A Sky Full of Stars

Starfield’s gameplay looks like a mix between Fallout, No Man’s Sky, The Outer Worlds, and Elite Dangerous (I’ll get to the last comparison in a minute). At a glance, it does seem like quite the recipe for success. 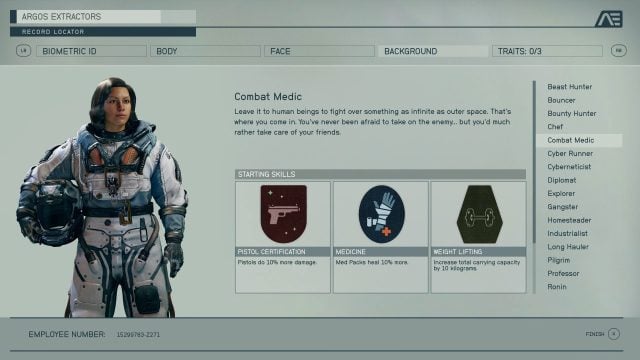 The player will be able to roam around planets and wander off in any direction. To help them identify key points of interest, they will be equipped with a trusty scanner that is basically Wikipedia and can answer all your questions on foreign material. This scanner can even identify enemies and resources scattered throughout the universe. 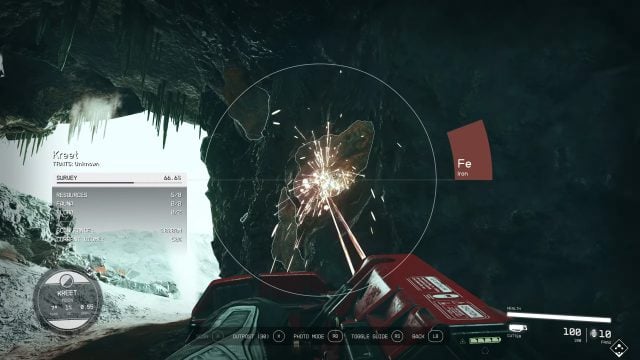 Players can use a specialized mining laser to strike at resource nodes to collect them. These resources will be used later on as players can create their very own space base wherever they choose. These points of respite can be their home away from home and tucked in between their favorite star systems. NPCs can even be hired to make the base look more lived in, and they can assist with maintaining the day-to-day activities. Think of an enhanced version of Fallout 4’s settlement system.

Starfield will have a good emphasis on combat, specifically gunplay. Bethesda has definitely tightened up Fallout 4’s shooting mechanics. Shots feel quite impactful and sound very meaty and give off satisfying hits. At the moment, all of the players’ enemies seemed to be pirates of various forms. 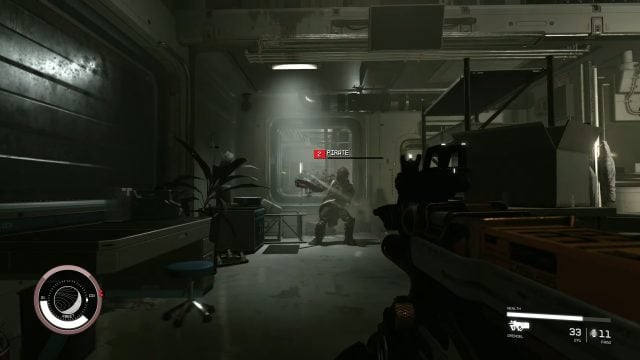 Players will be able to shoot up pirates with a large selection of futuristic, customizable firearms. These will include the usual ballistic weaponry such as SMGs, rifles, and shotguns.

The trailer didn’t give off a hint that we would be getting more exotic sci-fi flavors such as energy or plasma weapons. Starfield still seems to be grounded in its “NASA-Punk” reality. 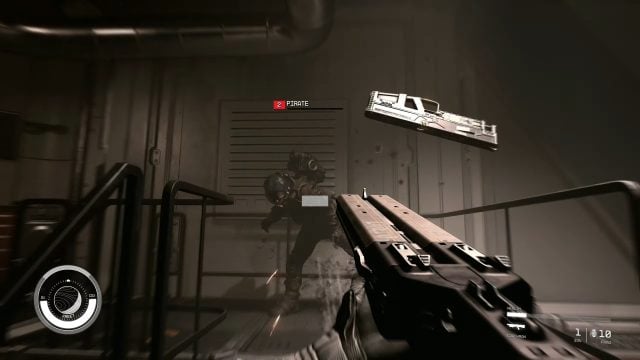 A Shot so Powerful

Also, it is worth noting that there doesn’t immediately seem to be a V.A.T.S.-like system to help players arm for specific body parts or locations. Melee weapons were also absent from the footage. There is a sort of bullet jump where you can propel yourself forward mid-air if you run with enough momentum, just like in Warframe. We can also expect to see some fights in zero-g.

Speaking of combat, one other previously unannounced feature is starship combat.

Taking a page from Star Citizen, Starfield is also implementing its own dogfights in space. What use would your fancy spaceship be if you couldn’t fly it around the vast and infinite cosmos? 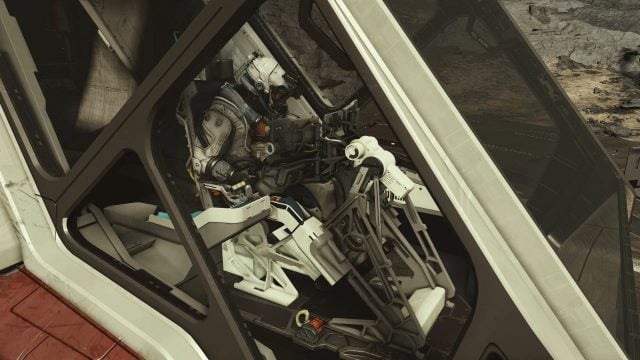 Pilot Your Own Ship

Starfield will allow you to pilot your craft in either cockpit view complete with dashboards or looking at your entire ship. More importantly, you can engage in ship combat, moving around in all directions. Ship combat is just what you would expect, chasing after your targets and trying desperately to keep them locked within your sights to launch a missile barrage. 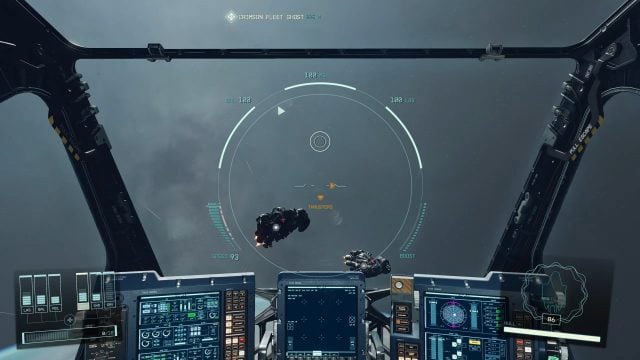 The entire thing looks quite frantic, and a whole lot of fun. We can get a good sense of actual speed as we pilot the ship in space. More importantly, blowing up your enemies looks great and satisfying. The way your foes just explode part by part instead of all at once is just so fun to watch.

Look to the Skies

Starfield is planned to release in the first half of 2023. It will be available on Windows and Xbox consoles. What we see so far looks good. Hopefully, they can iron out the 1000 planets and make sure that each and every one of them is satisfying to explore. The facial animations presented are also a big step up from Bethesda’s previous works but some of them still seem stiff. 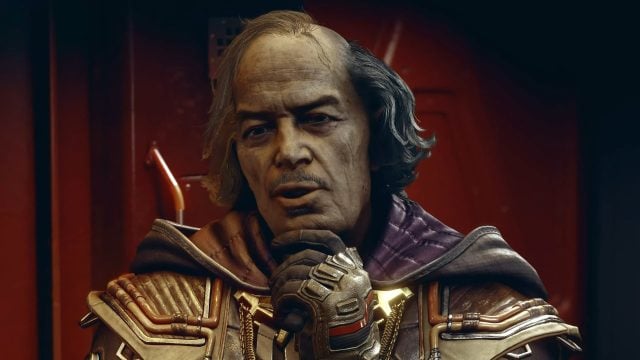 NPC Faces Got a Facelift

There’s still plenty of time from now until whenever it gets released. Be sure to check out our Starfield Wiki for more information on the game.

For more coverage on the Xbox & Bethesda Games Showcase, check out: