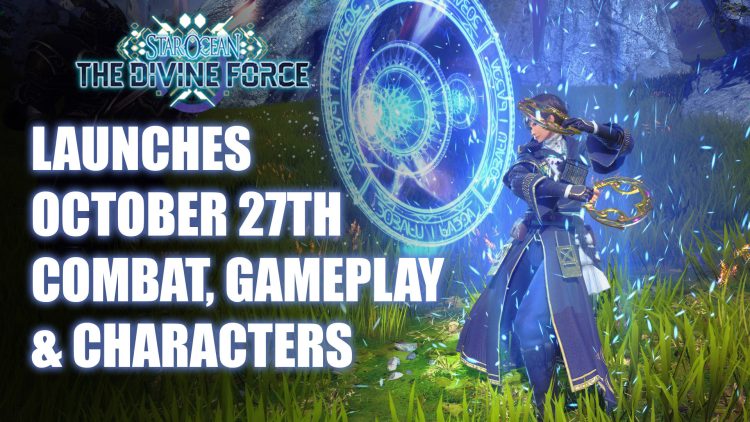 Square Enix and tri-Ace will be releasing Star Ocean: The Divine Force on October 27th.

The next entry in the Star Ocean franchise The Divine Force is launching on October 27th. The sci-fi action-RPG will be joining a busy month of RPGs with Forspoken, Harvestella and more also coming out during the same time.

A new trailer has been released for the game which features The Divine’s Force’s combat system and cast of characters. The title will present a dual main character system, allowing players to play both the great-sword swinging Raymond a spaceship captain and as the princess-knight from Aucerius Laeticia. Other playable characters announced include Laeticia’s fellow knight Albraid and Elena, who is Raymond’s first mate who wields a “hybrid weapon”. The seamless combat system allows players to strike up a battle with foes out in the world in a party of four. The AP system lets players use powerful moves with each character having their own speciality.

As for each character’s class or focus, Raymond can unleash deadly strikes with his greatsword, while Laeticia wields a flurry of dual blades. Albaird focuses on ranged attacks using chakram and magic. Elena whips out multiple special weapons that will morph with each skill. Nina looks to be the personal cheerleader of the team, using cheers to heal and buff surrounding allies. Lastly, Midas dabbles in grand semiomancy, with long cast times but amounting to colossal power.

There are different combat modes which include real-time fast-paced action, but things can also be slowed down with Stop Mode. Stop Mode lets players freeze the action to take a more strategic approach, giving options to focus targets and arrange your team. Players can assign different moves to action buttons, giving full customisation, this looks a little similar to how Tales of Arise worked. Gain further advantage using actions together in chained combos.

The end of the footage also teased what the devs will reveal next for The Divine Force which includes jetpacking around the world and even downward attacking foes from great heights.

Co-writing the game is president of tri-Ace Yoshiharu Gotanda with authors Satoshi Wagahara who worked on The Devil is a Part-Time! and Shunsuke Sarai who wrote the Dog & Scissors. The composer is veteran Motoi Sakuraba, and character design is by Akira “Akiman” Yasuda.

In case you missed it, Star Ocean The Divine Force will be a fast-paced Action-RPG in real-time which was revealed during Sony’s State of Play last year during Star Ocean’s 25th series anniversary. The title takes place in the once peaceful Pangalactic Federation. When Raymond, captain of a merchant vessel Ydas is attacked by battleship Astoria, Raymond and crewmate Chloe are forced to abandon ship. They head to an underdeveloped planet called Aster IV as their escape plan but get separated in the journey in the escape pods there.

October is looking to be quite the packed month for RPG gamers as the list now includes Star Ocean: The Divine Force, Forspoken and Nier Automata for the Switch. The end of the year also has more to offer with Harvestella coming November, Crisis Core: Final Fantasy 7 releasing sometime in December as well as Hogwarts Legacy coming sometime in the holiday season.

For more news find it here in Lost Ark June Content Patch Brings Upon The Wrath Of The Covetous Legion and Blizzard Interested In Acquiring Spellbreak Studio To Work On WoW Dragonflight.