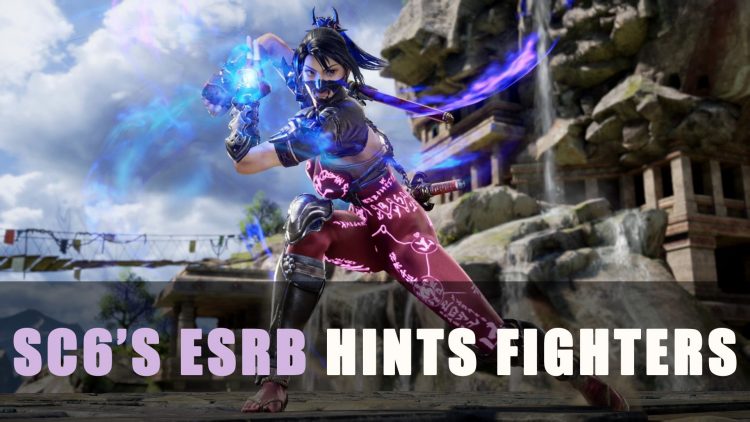 Soulcalibur VI has been rated by the Entertainment Software Rating Board, ESRB, which has hinted on a few things providing players incoming characters. Spare us Primera, we all know Soulcalibur has historically been rate T for teens. However, with this rating comes a summary and it was touched upon a few weapons that will be in the game. Soulcalibur VI is set to release on PS4, Xbox One and PC on October 18th, 2018.

Some of these weapons have been teased in the Story Trailer like Cervantes, who likes to shoot his enemies. There are also silhouettes of Astaroth and Lizardman teased in the story trailer. Yet, we haven’t seen anyone who uses a Lance in SC6, until we think back to Seong Mi-na or Hildegard von Krone. Their weapons could be consider as a lance in a general sense. Hopefully these characters along with Talim, that was hinted/teased before will join the confirmed SC6 roster below.

Below you will find the actual rating for Soulcalibur 6 along with details:

Rating Summary: This is a fighting game in which players engage in one-on-one combat with a large cast of supernatural and human characters. Characters punch, kick, and throw each other to drain opponents’ life meters. Several characters use swords, spears, pistols, axes, and nunchucks while fighting. Finishing moves and special attacks are often depicted with brief slow-motion effects; combat is highlighted by cries of pain and impact sounds. One cutscene, rendered in a painting-like art style, depicts a character sitting in a pool of blood. Several female characters wear skimpy, low-cut costumes that display large amounts of cleavage; one female character is stylized to appear nude, though no discernible details are seen (i.e., no nipples; crotch region flat). The words “a*s” and “bastard” appear in the dialogue.
If you enjoyed reading about Soulcalibur VI be sure to read Soulcalibur VI: Pre-order Editions and for more Soulcalibur VI news check out Taki Makes A Comeback. You may also be interested in other Bandai Namco franchises such as upcoming Code Vein.