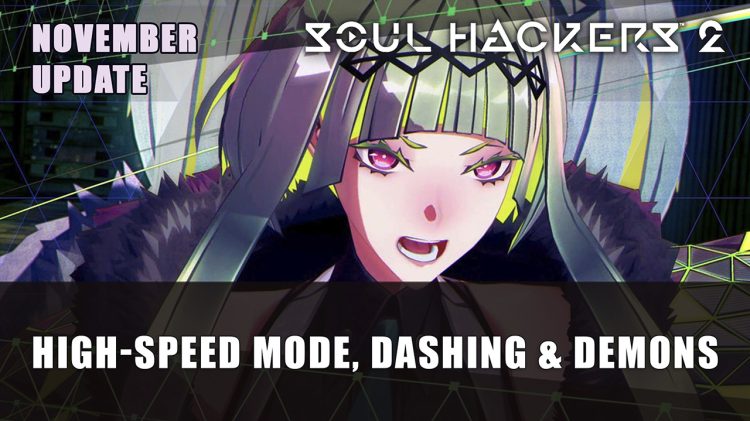 Atlus have announced a November update for Souls Hackers 2, will add new features such as high-speed mode and more.

Soul Hackers 2 To Get Update That Adds High-Speed Mode, Dashing and Demons

A free update is heading to the turn-based RPG Soulhackers 2. Atlus shares that the update will add new features including four new demons, a high-speed combat mode and the ability to dash. These new features will enhance the game’s experience “improving the game tempo” according to the Atlus official blog post.

Players will be able to speed up battle sequences with high-speed mode, if normal speed is a tad too slow for their liking. Other adjustments coming to the game add adjusted loading tips to speed up loading time plus other minor changes.

Players will be able to use dash to explore in Soul Hackers 2 with the November update.

New demons include the Pixie from the Devil Summon Soul Hackers, Neko Shogun, Aitwarasu and Isis.So far no exact release date has been announced for the update patch, but it is slated for next month November.

In case you missed it, in this entry of the series players will be attempting to save mankind through the agents of Aion, Ringo and Figue. They will try to put a stop to a butterfly effect that could lead to the destruction of the world. These agents have their own abilities such as Ringo who can enter the human mind and even bring back the dead, spooky. The game has familiar mechanics found in Shin Megami Tensei and even shares a few demons or two.

For more news find it there in Pokemon Scarlet And Violet Gets A Nostalgic Music Video From Ed Sheeran and Warhammer 40,000: Darktide Sheds Light On The Zealot Archetype As It Prepares For Closed Beta.