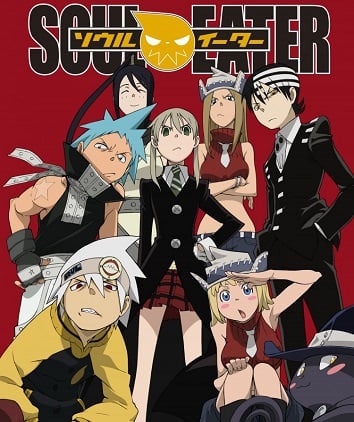 The story starts off by introducing 7 different main characters. These being Maka and Soul, Black Star and Tsbuaki, and Death the Kid with his partners Liz and Patty. Maka, Death the Kid and Black Star are miesters (people who can use others who can transform into weapons). The weapons have special properties to them.  Tsubaki can transform into various weapons. The main purpose of these miesters and their weapons is to make a Death Scythe, which is a weapon Lord Death, the miester’s leader, can use. This doesn’t happen often, but early on you see one, and later on a few others. Alongside making their weapon a death scythe, they are to keep the balance of good and evil and a Kishin not be created. Their main enemy, aside from other various monsters, and who in some cases try to make a Kishin, are the witches.

After learning about this and the main characters in the first few episodes the anime starts off with one of the main settings: Death Weapon Miester Academy. This is a school to teach miesters and their weapons to work together and keep the balance (on top of normal school) lead by none other than Lord Death.  It just builds from there, with each character pairs’ travels and experiences, sometimes with them being in the same place with one another.

Overerall I’d say the animation is pretty good. It flows well from one scene to another, including fight scenes, and the characters never look disproportional or odd unless of course the creator wanted that as comedic effect. You do, however, get blood on occasion, so keep an eye out for that if that’s something you don’t like but in all honesty there isn’t too much. Focusing on the fight scenes themselves, the fights are pretty good. You find a real sense of flow between the people fighting on a usual. Rarely is there a sense of over empowerment where one character is completely dominant over another.

Honestly, its very original and entertaining and stays in any limits originally set. While it has some fillers added in, they actually in a way keep up with the anime itself. And keeping up with all the main characters thoughts, feelings, and challenges only help make it even better. Add in the comedic humor, in great timing, while keeping the serious moments and drama, at points, makes this rise above other anime.

On a whole, just about every character , including side characters, have a bit of a story to them adding to their depth. The main characters, as you follow along, you see they aren’t these perfect people in there set, you see strengths and weaknesses to them, as a person, and see how they struggle and try to overcome them. This happens in fight scenes and out of them, giving the viewer a chance to really feel an attachment to them. They also add in multiple, as time goes on, “main” antagonists and select enemies with backgrounds that, so while you may not like them, or even care, you get a feel for them as well.

Overall the opening songs and closing songs are well done, and the music in battles, and usual story music only enhance the series and making it more entertaining to watch.

On a whole its a great anime. Animation is in my opinion well done.  The characters have a bit of depth at least to them, and the storyline with comedic parts coming in the right times only make it to be, for me, one of my favorite animes and worth rewatching at least once. It has some slow paced parts, but for the most part there isn’t a part that isn’t worth watching until about the very last episode, and even then it was still going pretty good.

5 comments on “Soul Eater: A Review”