Sony decided to push the E3 Hype Train to full throttle this year.  In addition to the usual live streams and teaser articles, this year they decided to hold streaming events in over 40 theaters across the USA and Canada.  Ol’ Skare (who lives in Nowhere, New York) read this announcement with a “that’s cool” attitude, never dreaming there’d be a theater near enough to attend.  Except there was.  Buffalo, NY was on the list.   They teased giveaways, 30 minutes of extra content for attendees and just general awesomeness.  So I signed up.  Then I immediately received a confirmation email saying I was in.  Sweeeeeeeet!

This then, is my take on the experience of Sony’s event.  I won’t go that in depth about games, news and most of the stuff the press conference covered because…they covered that already.  This is more about evaluating the experience.  Did they actually have giveaways?  If so, were they cool?  What was the extra content shown in the theater?  Was it theater exclusive?  In a nutshell, was it worth the drive?

So they promised giveaways and they delivered.  First off, I’ll point out that my ticket to get in was all for the low, low price of FREE!  So really anything they give on top of the theater experience was a nice bonus.  I wasn’t expecting a lot but in all honesty, I feel like they were quite generous.  Upon entering there was a table with a guest list.  After spelling my kinda long and fairly Polish last name for them I was given a VIP badge (the featured image above from The Order is one side and the other side is pictured at the bottom of the article).  The badge dangled from a glorious blue PlayStation lanyard.  “I’m already ahead of the game” I thought.  Then I noticed a code on one side and instructions to redeem it for the actual giveaway.  Neat.  Except they wouldn’t allow it to be redeemed online until after the show. Oh the suspense!  I won’t make you wait like I had to.  The code was redeemable for a  “digital gift basket” they prepared for attendees. This includes alpha access to Destiny, beta access to Battlefield: Hardline, $5 in PSN cash and 30 days of Music Unlimited.  See below for more detailed impressions of the event, but long story short it was worth the trip just for the experience.  So the gift basket is pretty amazing in my opinion and was a killer topper to the actual experience.  And oh yeah, on the way out we got a free poster too.  It’s basically an advertisement for a few games but it’s nice quality.  Way to kick some ass on this front Sony. 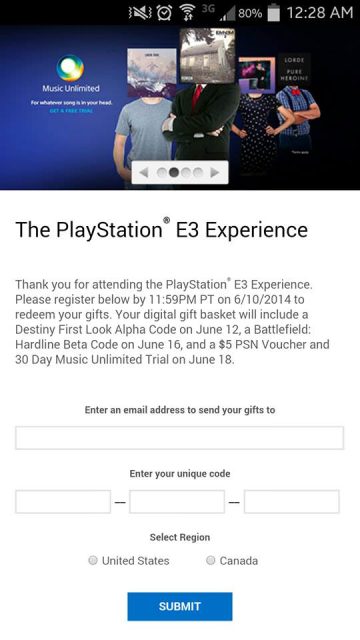 Self explanatory. I had to go here to claim my “digital gift basket.”

So we all saw the same trailers and interviews and whatnot during the actual event, but theater goers were promised 30 minutes of exclusive content.  They reiterated this a good deal so I assume it was actually exclusive. I won’t cover anything that the main conference did, but there was definitely a little extra info about many of the games that I don’t recall being in the main show. Now I admit I might cover an item or two that I forgot was in the main but settle down.  I tried my best to get new info.  Also, I took notes by sending myself text messages.  So I missed a thing or two. Ah whale…

Overall I didn’t note any real new video content regarding the games.  There could have been but nothing stood out as “Wow, that’s new.”  Most of the 30 minutes of extra content was developer interviews. While there should be nothing earth shattering below, they did provide the audience with a good feel for what they wanted to emphasize.  The interviews felt a little more personal than the press conference and developers seemed enthusiastic and ready to point out what they felt were the main selling points of their titles. 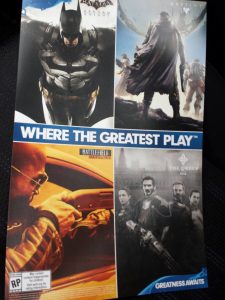 Overall I was impressed.  The theater staff was well aware of what was happening and directed me right away to where I should be. The event staff were organized and fast.  The theater was comfortable with plenty of room for everyone (and there were a lot of people).  It was a smooth process with a pre-show set of trailers and a countdown that turned out to be pretty accurate.  The post show started right after the press conference ended and lasted the promised 30 minutes.

There were a few hiccups with audio and video quality.  This was most noticeable during the trailers before the show.  There was an extended Batman trailer that I was only able to really see a very small portion of.  During the press conference, a few of Adam Boyes’ reveals had some difficulty as well.  A few audio hiccups accompanied the video glitches and would have been fine on PC speakers.  However, in a theater, any sudden noise caused by a faltering internet connection is VERY loud.  But in the end, these were relatively short lived.  In past years I’ve had the same issues streaming the show but more of them.  Seeing everything on the big screen was immensely more satisfying than streaming on a mobile device.

While I can’t speak highly enough of what Sony did, the crowd really made the entire event an “experience.”  I was unsure what to expect as far as etiquette.  I was pleasantly surprised when the audience was so into the show that everyone started clapping along with the crowd there live.  There was a lot of cheering for favorite series and letting out excited whoops when release dates were shown.  I let out a loud “YEAH” the second I saw Miyazaki’s name flash on screen.  I couldn’t attend the press conference “for real,” but with the crowd in Buffalo, NY (well…a suburb anyway) you would have thought we were right there.

This event absolutely elevated the entire notion of what E3 is for me.  If they do it again, I’ll be the first person to say you gotta try this if you can’t make the show live.  It was absolutely fantastic. 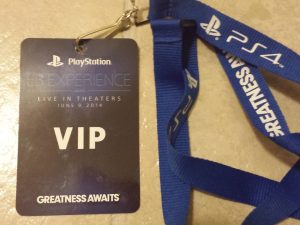 The evening was then capped off with an hour long drive home.  I had plenty of time to reflect on the show, thoughts punctuated by small clouds of fog along the road.  My only companion the steady red lights of the monolithic wind turbines dotting the hills.  Regardless of how you felt about the reveals, the E3 Experience Sony whipped up made this my most memorable E3 to date.

Great job Sony!  And thanks for the free stuff