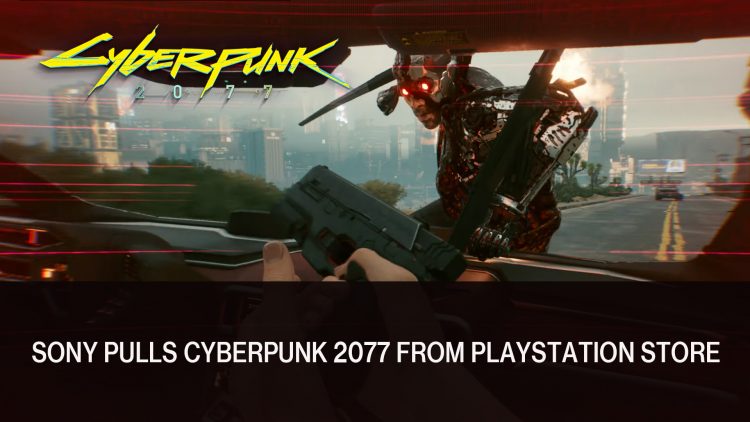 Sony has now pulled Cyberpunk 2077 from the Playstation Store due the current state of game and in response to the request for refunds from players.

It’s been a bit of a confusing week for Cyberpunk 2077 players, especially those who have purchased the game on Playstation. Previously CD Projekt Red had issued a statement sharing they will offer refunds to both last-gen consoles players, on Xbox and Playstation due to the backlash from players for the current state of the game. Many have reported the game’s unsatisfactory performance, with the amount of bugs, glitches and crashes they have experienced since its launch.

The developer had offered those who own the game and who were not satisfied with waiting for patches that will be rolling out early next year, to request refunds through PSN and Xbox store. However, there seemed to be some confusion with how the refunds would be handled, as many started to report their refund requests were being refused by their platform store.

@CyberpunkGame So, CD Projekt Red came through and said they’d agree to refunds for PS4 owners.

Sony? Not so much. If you downloaded it, they will not refund the title. pic.twitter.com/TUutotHl3b

In another turn of events today Sony has issued a statement on their official website explaining they have now pulled the game from the store. Cyberpunk 2077 will not be available on the store “until further notice” to ensure “a high level of customer satisfaction”. They are offering refunds to those who rather not wait for patch updates. You can find the full statement from the official Playstation website below:

This begs the question well what happens now? CD Projekt Red had already shared this week that they will be releasing patches to help fix the game and the performance for last-gen consoles, with the earliest rolling out within a few days. With news of the game now being pulled from the store, and those who are now waiting for fixes, it’s a wonder if the developer will change their plan for future updates. If they want their game to be reinstated on the PS Store, they will need to make the improvement and fixes needed to have the game run smoothly on these platforms. Hopefully fans who have chosen to wait for patches will get these as planned, as this has created quite a mess.

For more news find it here in Hades Gets Cross-Save Function Between Switch And PC and Bioware Confirms Several Veterans Have Returned For Mass Effect 4.