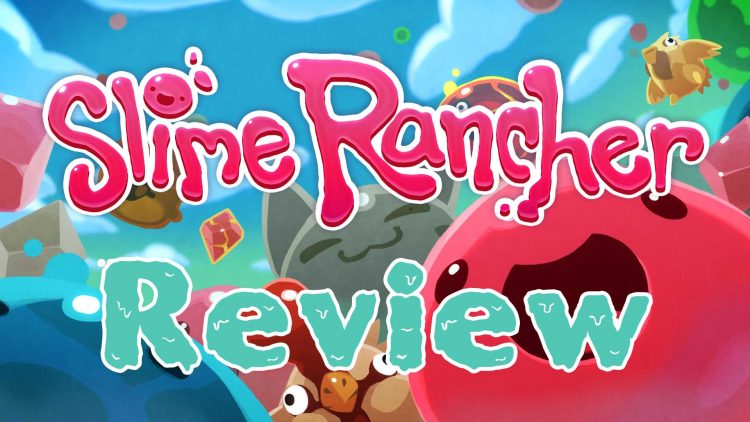 Developer Monomi Park’s, Slime Rancher  is an interesting combination of a calming yet challenging world exploration and exploitation game like Minecraft,  and a soothing, peaceful farming simulator like Harvest Moon.  It’s clear that sacrifices had to be made in order to mash these two genres together.

Yet because Slime Rancher  is also a quirky indie game, I never felt myself being calmed and soothed into boredom. I’ve also never felt as if the problems that arose from splitting time between exploration and farming were unmanageable or anything other than a fair challenge added to an otherwise very easy game in order to add a level of difficulty. Slime Rancher  is very much an easy game, but there’s still enough challenge to give a sense of overcoming adversity on an alien world.

It would be unfair of me to say Slime Rancher’s  story might as well not exist. The effort to include a back story into the game is noticeable and appreciated, but it really falls short. “StarMail” (in-game email) sent to your character and notes left around different parts of the map comprise the entirety of the game’s narrative. Explaining how and why your character decided to move to a slime ranch millions of miles  from home adds something to a game like this. 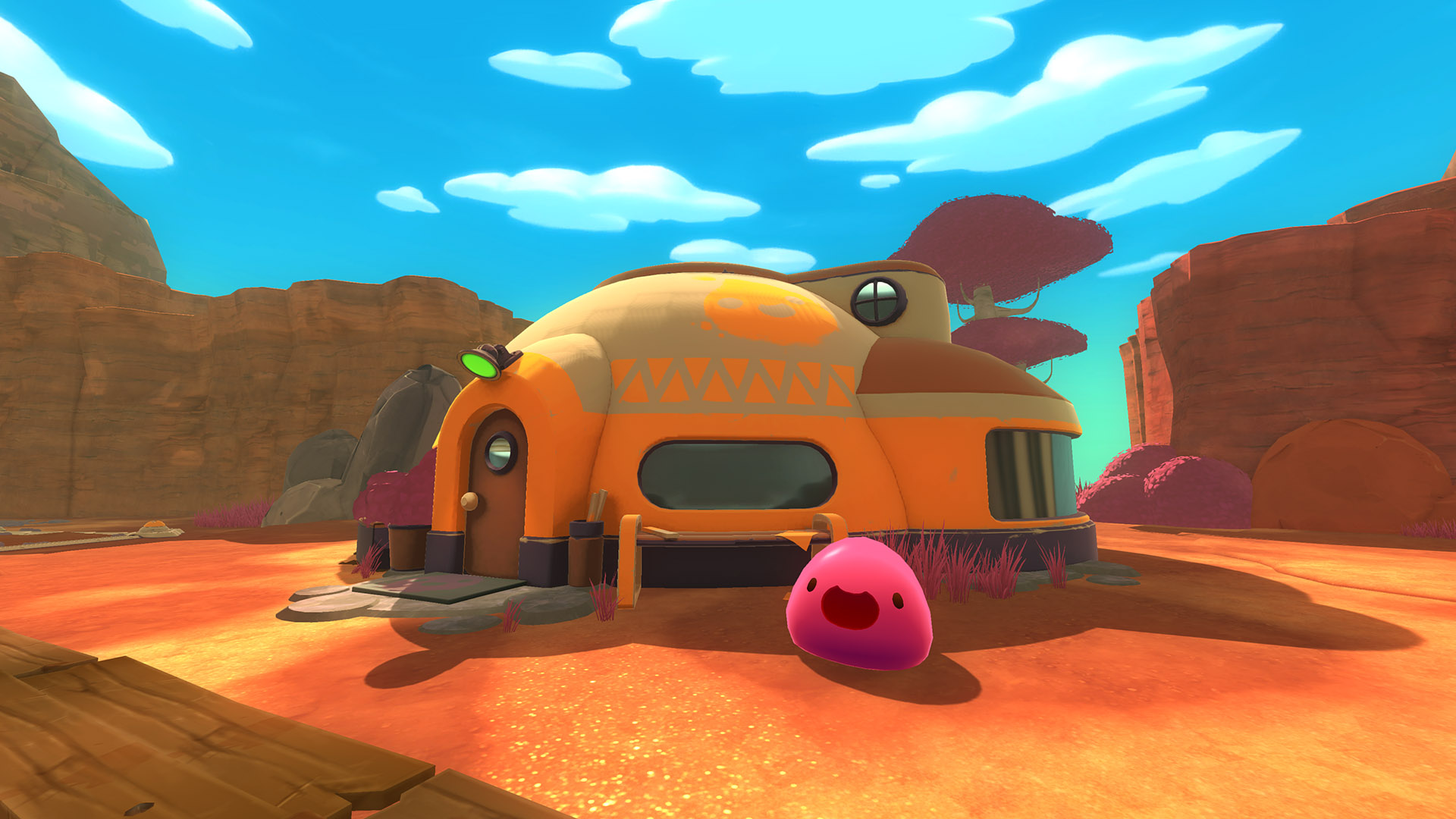 However, in this instance, “story” could be replaced with “contrived reason for this fun game to exist”  in every conversation about the game without issue or inaccuracy. This is not a story heavy game. Everything that explains why you are where you are is insignificant compared to the fun you will have being there in the moment. While wrangling your slime critters is a blast, there’s no deeper meaning or reason behind it. Do not go into things looking for a story that really makes more than a shallow level of sense, or compelling and complex characters. Slime Rancher  is not that type of game.

Slime Rancher  is a brilliantly planned game. The mashing of the “Exploration” and “Farming” genres make it almost immune to criticism, because any complaints are simply a part of one of the two genres. It’s difficult to complain about the repetitive  nature of collecting the “Plorts” your slimes generate when the very nature of a farming game is repetitive action. It’s difficult to criticize the somewhat confusing layout of the map when the very nature of an exploration game is traversing a complex and hostile world.

This criticism is rendered completely inert now that the developers have included a map of the world you can pull up at any time. Every shortcoming that I’ve encountered comes down to either my personal preference, the nature of this genre of game, or something that the very active developers patched up before I can get my review up. 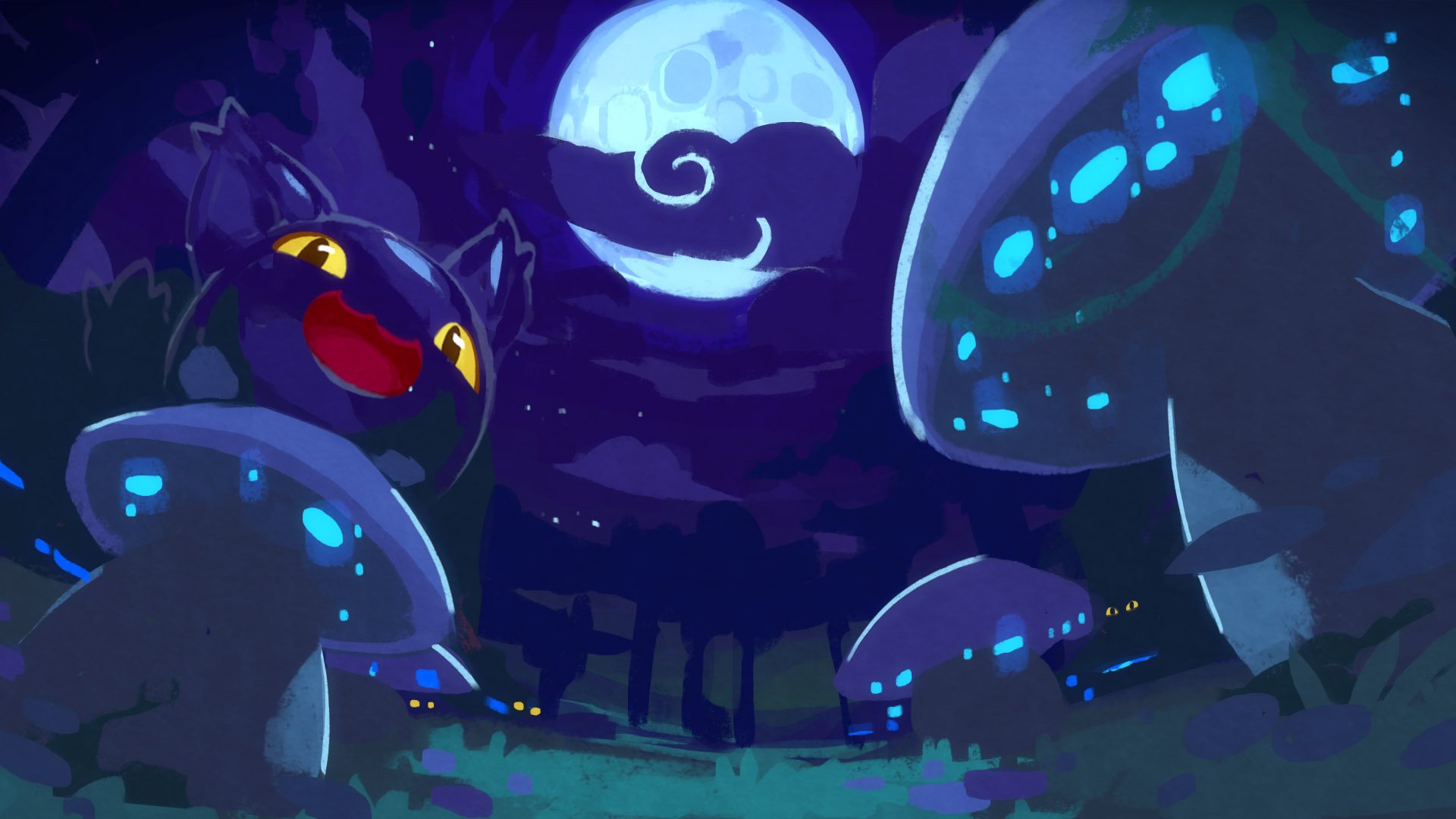 Main gameplay loops,  are the bread and butter of both of these types of games. Slime Rancher’s  is nothing to write home about. From what I can tell, the main farming loop is enough to keep your garden variety video game player entertained. Perhaps it says something about me that the repetitive loop of farming crops, feeding slimes, collecting Plorts these slimes excrete (gross), and redeeming them for space money in order to buy upgrades for your farm and your character provides me with a very deep sense of calm. 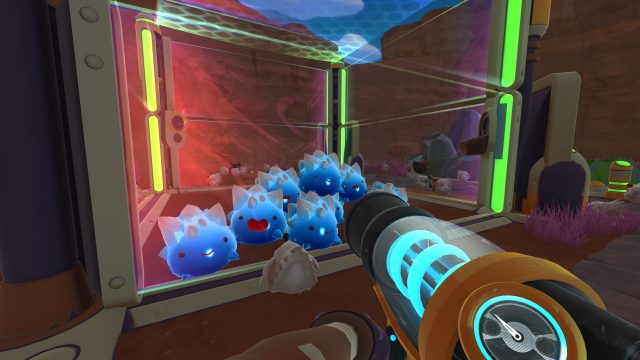 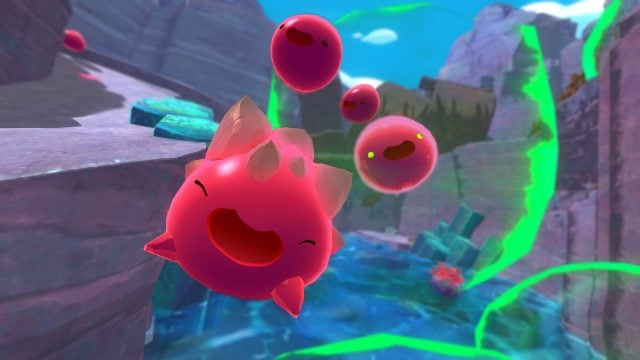 The resource management and splitting of time between this main maintenance loop and exploring to find new and more valuable slimes is just enough challenge to give me a consistent sense of accomplishment. Maybe this is what hardcore RPG players feel like when they grind for hours and hours. Maybe this is why your mom STILL loves Farmville  so much. Maybe this is what people with real jobs feel like after toiling all day.

Regardless, there is a science to the simplicity. Sex is a pretty repetitive thing, but you won’t catch me complaining. In much the same way I won’t bemoan Slime Ranchers  farming component. In fact, I really like it  and would like to do it every nigh… err.. play it quite a bit. 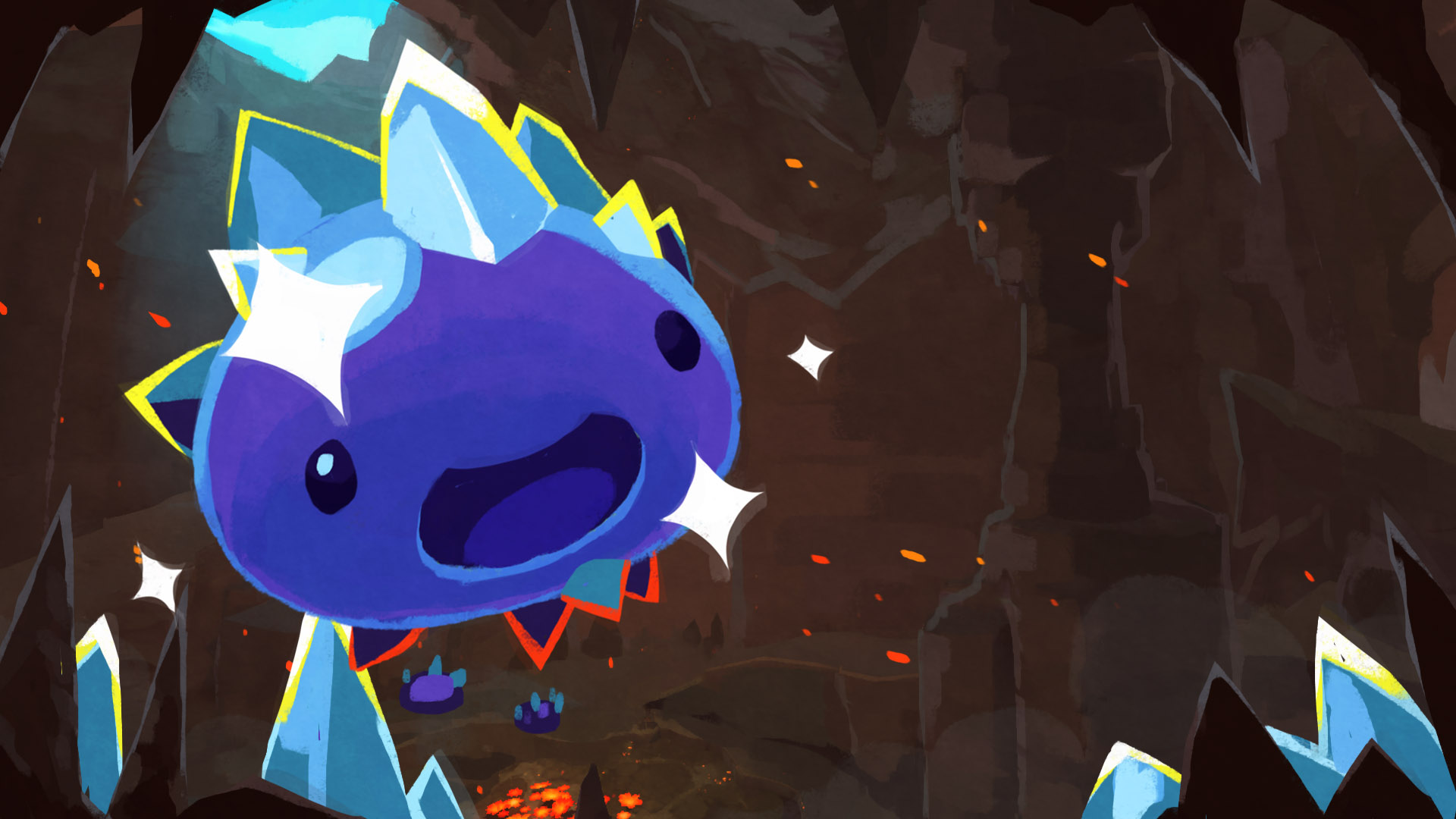 Exploration, the other half of the Slime Rancher  formula, is lackluster at first. There’s not much to look at. You might wander around, observe slimes in their natural habitat, and read notes left behind from your predecessor. None of it is compelling or even interesting. Later on though, things get a lot better. There’s a lot to explore in game once you’ve completed somewhat obscure tasks in order to obtain a “Slime Key” that unlocks one of the mysterious “Slime Doors“. 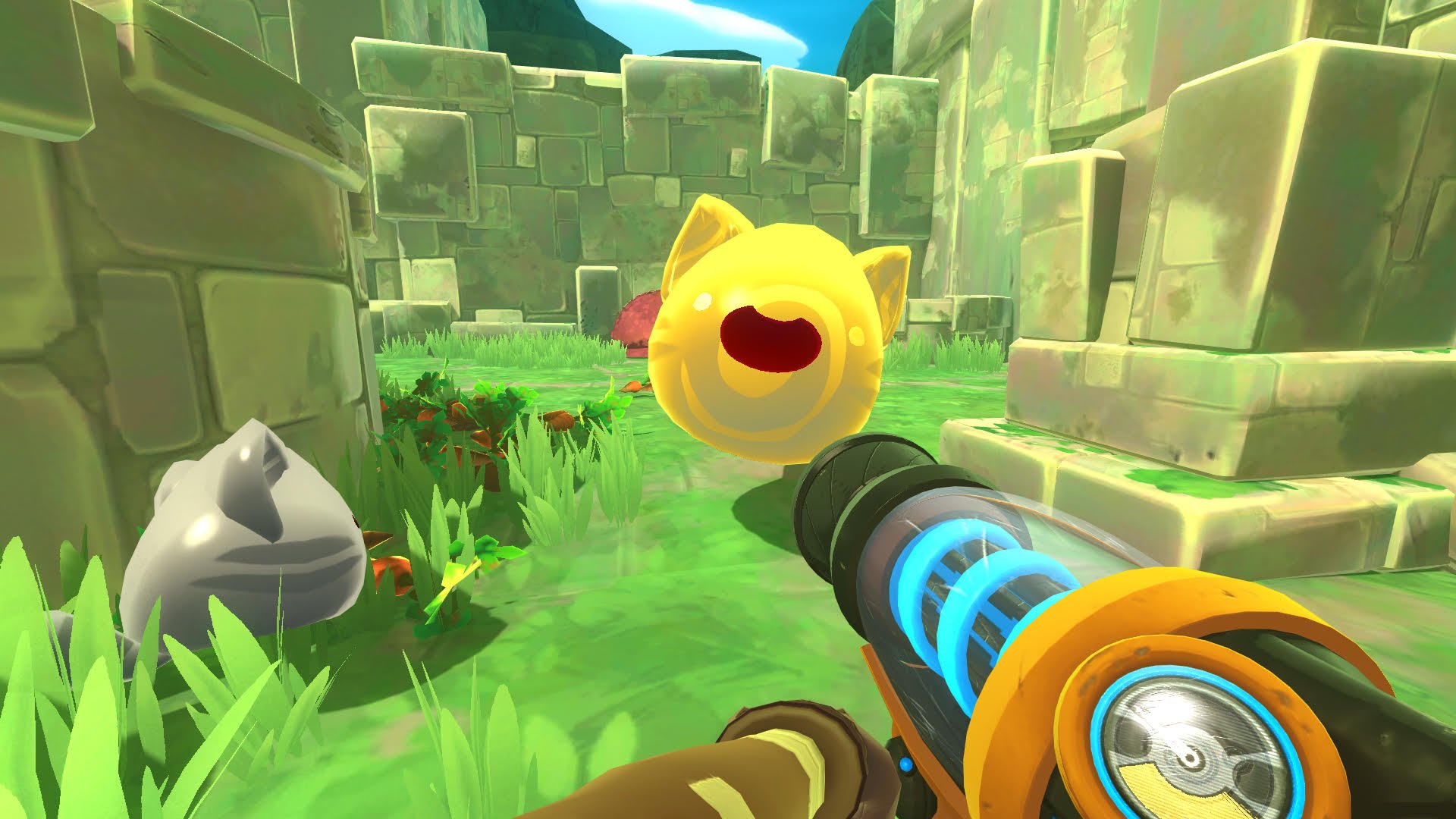 Naming is a bit on the nose, but once you’ve gotten through a few doors there’s a lot to explore, and a few puzzles to unravel. I’ve still yet to work out what I’m meant to shoot into the pink slime statue’s mouth. As I write this it seems obvious that it must be whatever pink slimes eat… I’ll be sure to try that when I’m done typing. In summation, exploration is fun and solid, I’m just concerned about the people who might drop the game before  it becomes that way.

Monomi Park’s first effort is not a perfect game. It doesn’t look particularly good, it doesn’t run all that well on my computer, and it is a somewhat basic game. Monomi Park has, however, managed to make the perfect game for a specific type of person. I’m confident there are a large number of people who love both Stardew Valley  and Minecraft.  This group of people will play Slime Rancher  obsessively for many many  hours, taking advantage of the “5-Day Rush” game mode to increase the challenge. I’m sure they’ll work out a complete guide on how to obtain more in-game credits in those five days than I have in the 60+ in-game days I’ve played. 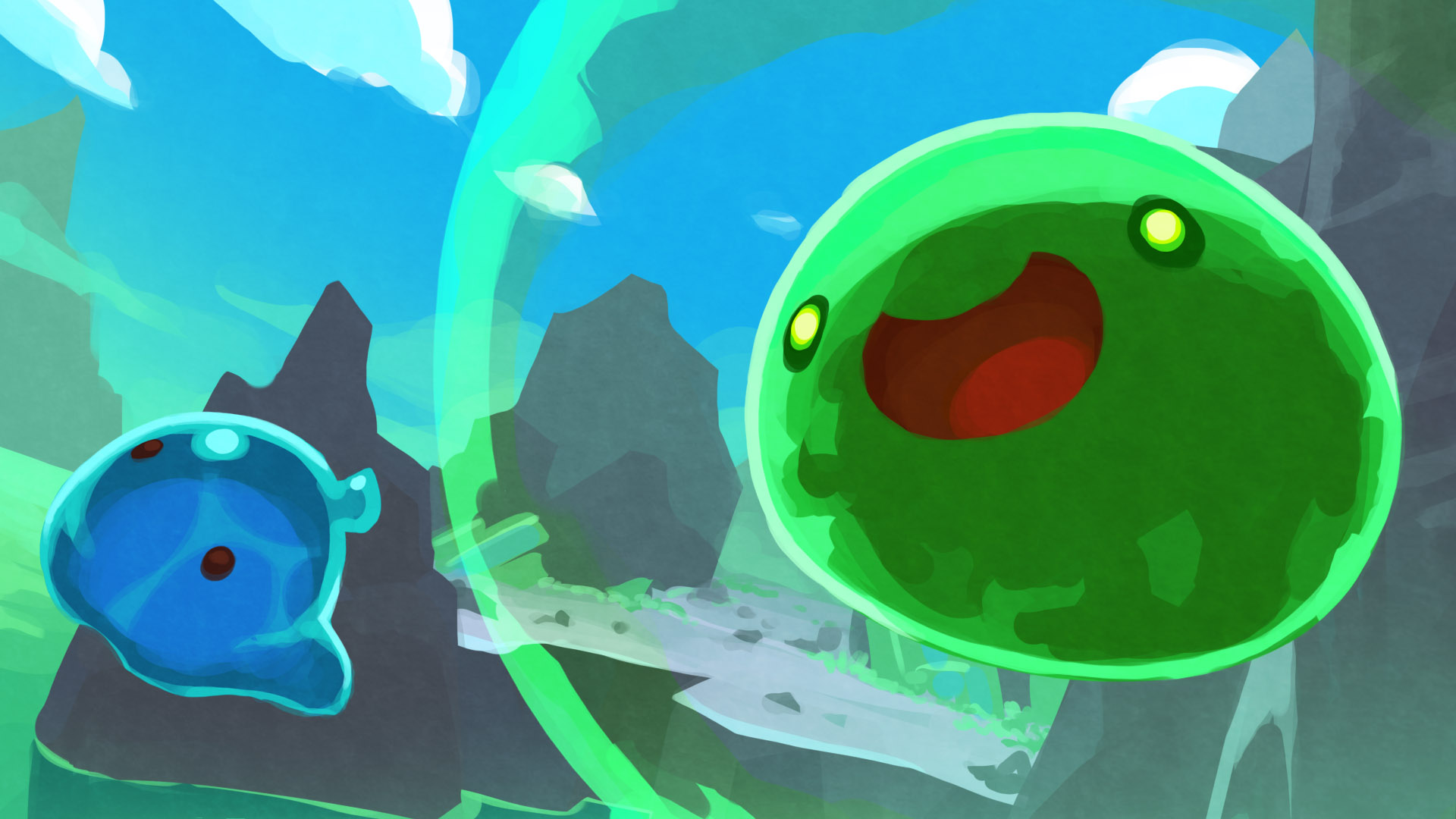 This game represents everything that an indie game is, good and bad. A group of people set out to make a game that they’d really like to play. Their desire to make a game that is not aimed at the lowest common denominator of video game players in order to maximize sales and revenue is apparent  from the second you’re dropped into the “Far Far Ranch”.

No jerkoff in a suit from the marketing department that sat down the design team and made them insert giant breasts in order garner attention. No fat cat with dollar signs in lieu of pupils hired another team to ham-fist some sort of online economy with micro-transactions into the game’s farm exchange. No trendy go-getter with a messy bun used a million buzz words to convince Monomi Park to give the game more of a “mass market appeal”.

7.5
Summary: Fundamentally, it is a bullshit free game. I didn’t like Harvest Moon or Minecraft. Frankly, I’m not even a huge fan of of this new Frankengenre niche Slime Rancher has carved out for itself. Despite this handicap, I loved the game. Slime Rancher proves to me that a group of talented people making a game that they’d like to play will make something that is the perfect game for a small group of people. More than that though, there is an obvious passion, a lack of nonsense, and an awareness that a game should be one thing at its core: Fun. These traits have resulted in not only the perfect game for a small group of people, but a truly lovely game that many will play and enjoy.
Story & Setting (6)
Gameplay (9.5)
Audio & Visual (6)
Replayability (7)
Pricepoint (9)