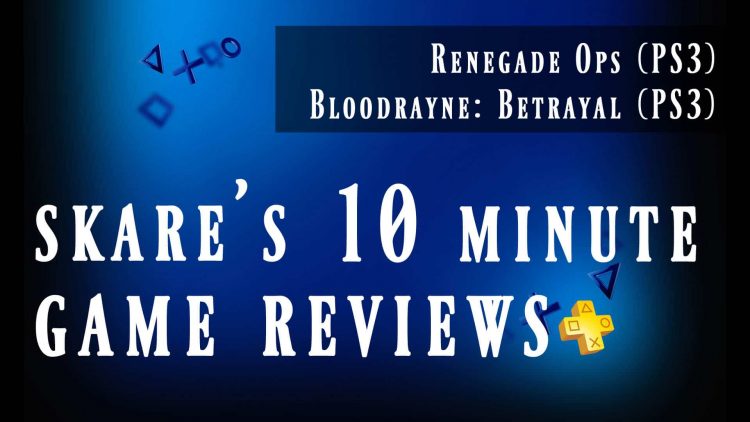 How many of you have Playstation Plus? Ok, ok….not all at once now.  How many people love it? Ooh ooh ME ME!!! I hate to break it to you. There’s a big problem. I have too many games for the amount of time I get to play them. Crap.  Now what do I do? I let them pile up while I’m completing a game I love.

Triage. I gotta prioritize what I’m playing. With Plus there’s a slew of games I never would have spent money on but are worth a shot. So to that end, I’ve been taking time to clear out my backlog to your benefit. Prepare for 10 Minute Game Reviews (ten minutes referring to my play time, reading this will take much much longer).

For this special inaugural edition let’s make it a twofer! And yeah, these aren’t gonna be new games all the time but if you’re like me, you’re just getting to them (or are looking for a cheap pickup for the weekend)


This 2d sidescrolling beat-em-up took me by surprise. I’m not completely ignorant of the franchise so “Streets of Rage: Vampire” was not what I was expecting. So I’m a vampire with a gun and some flashy moves. That is expected. There’s some dapper vampire enemies that all look alike and die pretty easily. You can stomp on their head after cutting them in half. That’s neat.

How far did I get: Not very. I played the first board and then deleted it for space for more games.

Who is this game for: I think Bloodrayne fans looking for a casual addition would get a kick out of this. The character renderings and vampire feel are all there. Fans of this style of game would also like it for the same reason. While I personally would have preferred faster with better attack animations it’s no worse than many other titles of this genre. And to be fair there could be some really sweet stuff past the first level.


I’m dropped into a world in which a a brutal terrorist is threatening the world’s leaders. One man, and his band of trusty heroes will save the day! In an SUV. With weapons. There’s lots of crashing into things involved and shooting. We’ve all seen the formula: Left stick moves, right stick shoots, other buttons do stuff. Everything is top down view. Thank you camera in the sky!

How far did I get: Not very. I completed a few primary missions in the first area and was working on rescuing prisoners and bringing them to a church or something on the side. This might have been a true 10 minute game before it got deleted.

Who is this for: Anyone who likes a little random carnage from time to time. This game is more victim of me no longer really liking the type than anything else. Apart from the steering it’s what you’d expect from this type of game and feels like an HD update to a classic arcade game. If I didn’t have so many other games waiting for me, maybe it’d still be around.

Check out all our Playstation Plus Free Game Reviews

More Gamer Playstation Plus Reviews Every Week and see more in our Game Reviews section!