Shadow of the Tomb Raider’s newest DLC, The Serpent’s Heart went live on March 5, 2019. The Serpent’s Heart DLC is free to download for all season pass holders of Shadow of the Tomb Raider, and those who wish to purchase it can do so from their respective online store. Along with the new quest, players can obtain a new bow, new armor, and once completed a new skill. In this guide, I’ll be instructing how to traverse the new tomb as well as solve the puzzles.

Shadow of the Tomb Raider: The Serpent’s Heart DLC Guide

Once players have logged into their games after purchasing the Shadow of the Tomb Raider: The Serpent’s Heart DLC, a message will appear instructing them how to access the new mission. This mission resides in Paititi and can be accessed under the “Side Mission” menu. 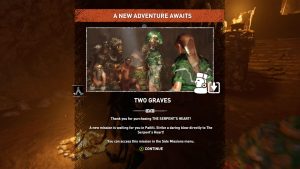 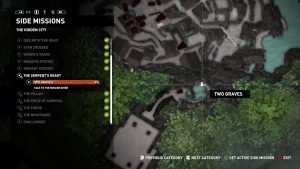 You will also be gaining new pieces of gear, these a part of the Myth Hunter Gear, this includes a Dragon Scales outfit and Serpent Lash bow weapon. 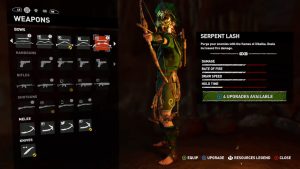 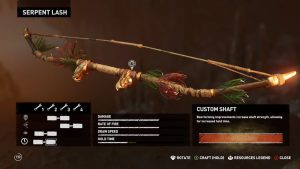 Purge your enemies with the flame of Xibalba. Deals increased fire damage 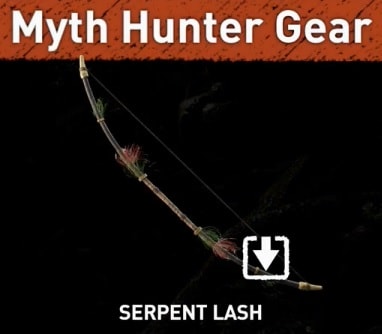 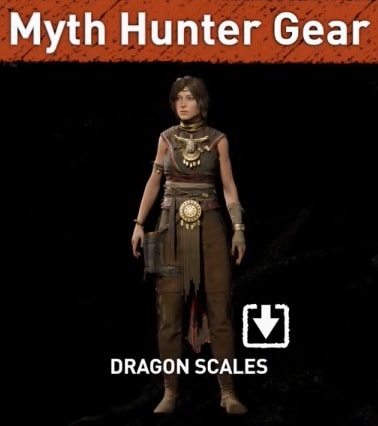 Speak with Hakan in the Village Caves campfire to initiate the questline. Before leaving the area, swap to the new Serpent Guard armor you’ve just obtained, then descend down the stone stairs. Continue on this path even after crossing the lone log bridge. After crossing the bridge head towards the intersection of the path near the man and move towards the direction of the 2 guards. At the end of the path will be a small opening Lara will have to squeeze by. Follow the path until Lara is roped into performing a blessing which the game will escort you. Players will have to progress to the end of the pathway then Lara will begin prepping for battle. 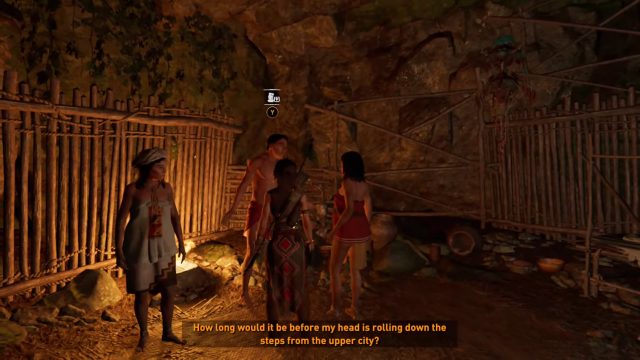 Players will have to eliminate 2 guards that are making their rounds to the right. Travel to the left portion of the map to take out another 2 guards. There will be a lone enemy that will spawn in after the 2 guards have been taken out so be alert to take care of him also. Climb the wall straight ahead (it will be marked by white paint) to gain access to the higher level. Make your way while ducking to encounter a cutscene and obtain the Coded Message.

Attempt to stealth kill the 4 guards as it will greatly cut down on difficulty if you manage to take 1 or 2 out before they all fight you at once. Climb up the alter by the white marked wall, traverse the gap using the wooden bar to make your way back from where you entered. Once Lara descends into the room 3 more guards will pour into the room. Try to take them out before they see you in order to whittle their forces down. Exit the room to find 2 guards that will have you in their sights. Climb the white marked wall ahead, watch the new cutscene, then proceed through the newly opened crack in the wall. 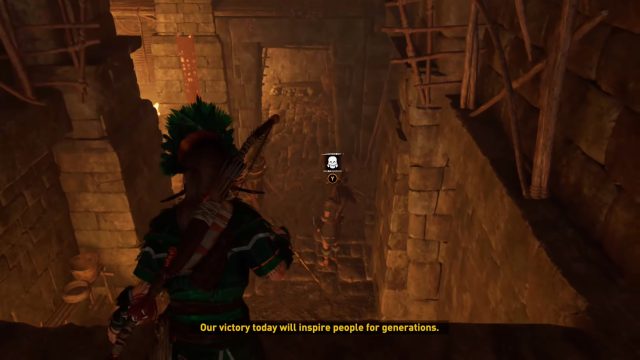 Climb the wall, cross the stone bridge, jump over the gap, and proceed through the small hole ahead. Jump towards the tree branch to use it as a springboard allowing access to the next section of the level. Travel through the cave until another cutscene begins.

Jump into the water and swim to the closest hut/house to the right. Take the left ascending stone stairs to the end, make a left, and proceed going straight on this path until you hear the dialogue from the 2 men. Talk with them to start the second part of the mission.

Descend once again from the stone stairs and head straight until you reach a stair to the left and a path to continue heading straight. Ascend the stairs, veer right heading down this path until you reach a large tree. From the tree head left, cutting through the right half of the market and entering the forest. Continue on this path and you will find a blue flower bush and a sitting man. The path you want to take is to the left of these 2 markers. Lara will enter a muddy route, proceed until the end of the route that contains a campfire to the right.

From here, move through the dimly light area following the path you are on, this will lead to a vine-y area Lara will crawl through. Follow this path until the end, enter the water, travel to the right onto land to trigger another cutscene.

After the cutscene, exit the cave backtracking to where we entered under the vine-y area. Proceed to the left until you reach the water. Swim to the other side and continue on the path entering the cave ahead. Head to the left of the dead wolf and interact with the wall to enter the tomb. 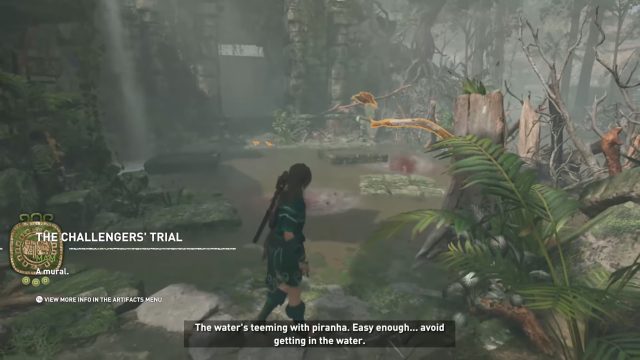 To the left of the tomb entrance will be The Challengers’ Trial. Avoid falling in the water as there are vicious piranhas, so be careful while crossing. Enter the tomb and interact with the switch to the left, then the one to the right. Quickly jump onto the wooden raft minimizing the time spend in the water. Shoot the 2 green orbs on the side of the wall in front of you, it will reveal a blue orb that must be destroyed also. Beyond the gate there will be 2 rows of blades. Jump over the first one, proceed to crouch under the second. As the raft floats down the water, take the left path jumping from platform to platform, while the raft floats down the center. At the end of the left path, the raft will be ready to be climbed on once more. 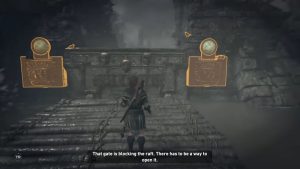 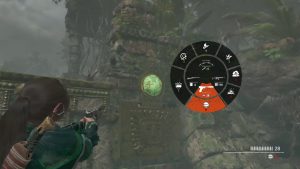 The raft will continue floating down to another tight spot that forces the player to take the right pathway. The raft will rotate 2 turnstiles which will activate the upcoming bar blades to spin. First, jump over the right bar, then the left bar, and avoid the rotating bar. This will lead the raft to another gate that must be opened. Hop to the left to activate the lever and lower the gate allowing passage inside. Take the right path inside until you find the raft in the middle of the waterway. Get on it and shoot the green orb follow by the blue orb to lower the water level. The raft will move slightly, repeat the above by shooting the right green orb then blue orb to continue having the raft move you to your goal. 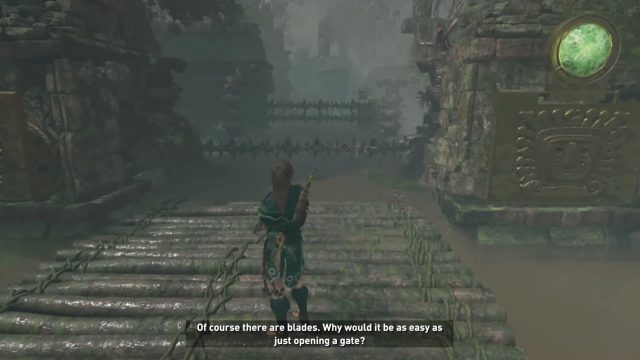 After avoiding the 3 sets of rotating blades, take the left path with the sinking platform to find another green orb at the end of the path. Backtrack to the start of the path and quickly jump/swim to the right path. Proceed like the left path, progressing until the end and shooting the 2 colored orbs to solve the puzzle. 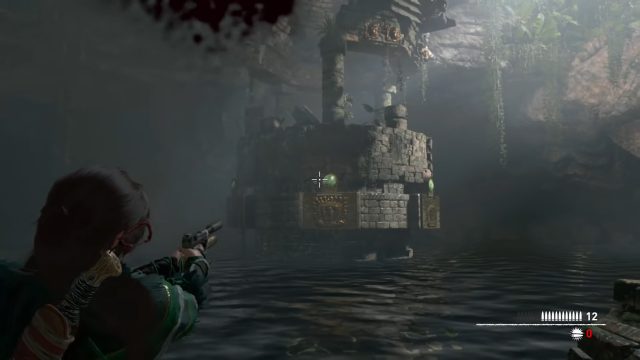 The raft will float towards a white marked climbable wall on the right. Climb it, follow the path until the end veering right to activate 2 switches. This leads to a raft and Lara must shoot the green and blue orb. This will lead the water level to drop and send Lara on a mission to avoid rotating blades while sharpshooting the green/blue orbs to progress. I suggest players to use an automatic weapon to quickly and efficiently hit all the targets. Once the center tower orb has been shot, Lara must jump towards it and climb it. Interact with the board up tower to get it moving once move and ascend the tower. At the peak players will obtain the Divine Bounty and the Godslayer. 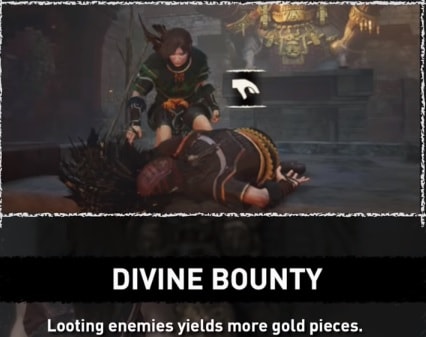 Make your way back to Hakan by taking the path towards the water, staying to the right. Find the vine-y low area to crawl under head down the lone path. Swim to the right cave opening, slid through the narrow slit in the cave wall. Eliminate the enemies and climb the right wall. Take the path to the jungle, use the tree branch to traverse over the gap and climb the rock wall. There will be more enemies ahead inside the cave, so take them out your way while heading down the right hand path. Eventually Lara will reach the rope bridge, watch the ending cutscene, and receive the following rewards:

Hopefully following this guide you can obtained the Godslayer! Enjoy your newly claimed Dragon Scales gear and Serpent Lash-Godslayer for Shadow of the Tomb Raider Serpent’s Heart DLC.

If you enjoyed this guide be sure to check out our guides section as there are many to help aid you in your next gaming adventure. You might also want to check out our  guide for Shadow Of The Tomb Raider: The Nightmare DLC Guide. If you’re looking for another action-adventure to sink your teeth into try Assassin’s Creed Odyssey next.