Activision and FromSoftware revealed their upcoming title Sekiro, making Souls fans eager for a possible souls-like. But with limited information available, speculation goes rampant about whether the game will have a souls feel or not. This Demo Preview will shed some light on what we know and what to expect.

Sekiro Demo Preview: Is it Souls?

The most important thing to consider during pre-release information is that plans change. Once upon a time, Nioh had no multiplayer. Once upon a time, Dark Souls Remastered had HDR. So as you read through this, remember that whilst most basic blocks may not change, there are usually tweaks and changes to what deployed with the final release, and what is considered for DLC.

Sekiro is an action-adventure game with RPG elements. What does this mean? According to the interviews by From staff, a lot of the systems that would make for an RPG have been entirely removed: for souls players this means that traditional “builds” are no longer a thing.

FromSoftware says that there are no stats or levels, leaving us to focus on perfecting our deadly craft with a katana on the right hand and several tools for the prosthetic ninja arm on the left hand. The upgrades found through progression can still be ingeniously used to create interesting takedown situations, but builds and leveling are an important part of souls that is – according to From – not going to be available. 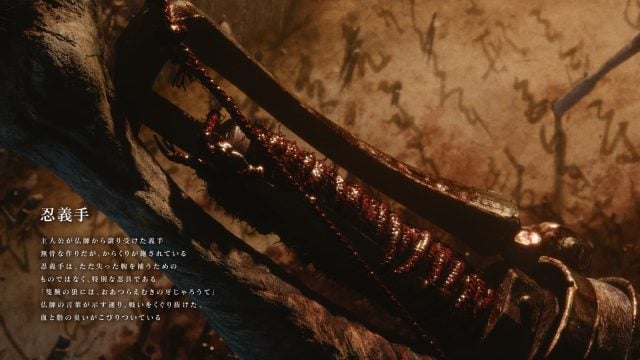 A prosthetic received from Busshi of Aretera, it is a bare-bones craft but hides Karakuri, making it a special ninja hand. “Let’s make a fang worthy of Sekiro the Wolf”. Transcending the fight, the smell of blood and fat is embeeded deep within

Should Souls players be excited for Sekiro?

As a souls player, the lack of multiplayer (again this is something that could be added on later – like Nioh did, but don’t hold your breath) and character creation / builds may be very off-putting. You may, however, want to stick around and consider that perhaps you could enjoy From’s combat without having to worry about getting to X weapon for Y stat. And here is where the game does look glorious and tempting in every way: the combat!

From what has been shown, Sekiro approaches combat with the concepts of Poise (“Posture” now and slightly different) and Parry at the forefront of design. A strong Bloodborne feel comes from the combination of swordplay with the accessories on your prosthetic arm (as we mentioned previously, from and axe, to shurikens, and even a torch or explosives). This is further reinforced by the GOW-like opportunity to break down or parry an opponent and initiate a finisher for that extra “awesome” feel to your kill. Be warned though, enemies can do it too!

Enemy movesets are varied and interesting, and learning them will be key to progress. Again much like God of War did, the game also has a mechanic to warn you when an enemy is about to perform a special attack, this time with a large written warning rather than a subtle cue. This does not neglect combat learning and experience, as there seems to be a myriad of combinations they might use to get you.

There is some sort of healing item, although the name for it was not revealed – so you can regain health in combat to stay in the fight. There’s also “in combat revive” as shown in the teaser, that can be used to disband crowds and get back on stealth if so desired. FromSoftware says it comes at a cost, but we do not yet know what it is. 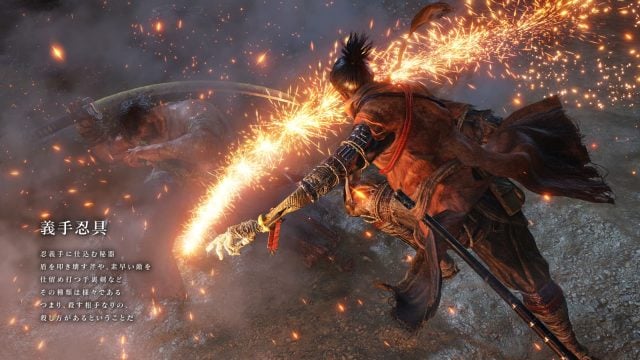 The Level Design of Sekiro

The world of Sekiro is a fantastical re-imagining of Sengoku Era Japan. The 1500’s look beautifully realized in the game, and progression seems fluid and inviting. From says that the levels are inter-connected and somewhat seamless, which is something we really appreciated about Dark Souls.

Shortcuts, passages and secret locations seem to be available from apparent (but unexplored) secret doors. Fromsoftware says there are many such corners to explore, which should be a welcome feature for most souls players.

Some unfamiliar but certainly appreciated change is the addition of stealth mechanics as a means to resolve progression. It is possible to sneak up on enemies and take them down in one carefully planned attack, giving players an option to opt for smarter combat. This isn’t Metal Gear and you won’t be sneaking past the whole level, but you may thin out enemies before engaging, or take out a guard before they can call more and surround you.

The most disruptive mechanic introduced into the game is the grappling hook in your prosthetic arm. Verticality is something Souls players have not quite experienced before, but proved an excellent addition to other adventure games such as Uncharted, and certainly does not disappoint here. Accessing the higher points of the maps, rooftops, tree-branches gives the player a sense of ownership over the battlefield and an opportunity to carefully plan attacks and progression.

Further, a Famitsu interview revealed that you can eavesdrop on enemy conversations and use the information for your battle preparedness.

Lastly, a mechanic that has been absent from Souls but is important to gameplay: A jump button. The combination of grappling hook and jumping makes for an entirely different approach to exploration, that focuses on finding hidden areas and perspective points. 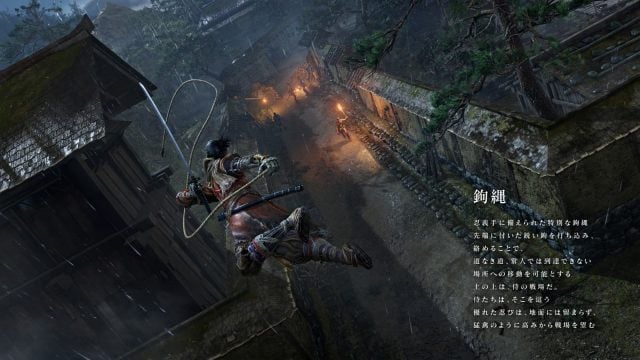 A special grappling hook for the Ninja Prosthetic Arm. It has a sharp hook on its tip, that can pierce and entangle on your target and allow you to reach places without roads. The ground is the realm of the Samurai. Excellent Shinobi shall not be grounded, and will afford themselves the benefit of height and watch the battlefield as a bird of prey.

To Hype or not to Hype

Seeing Activision show as the publisher has many gamers concerned, however FromSofware says they used the reach and technical capabilities of the publisher to streamline the game with data-points that they would otherwise not have for “player understanding”

Those who have been fans of FromSoftware since before Souls are probably aware of their varied repertoir: games like Kuon, Tenchu and Armored Core all share a “something” while being very distinctly different from each other. In Sekiro’s case, the change of focus from classes and stats to a fixed progression of polished combat gives and opportunity to get a feel of “Tenchu Souls”, a shinobi game with that beautifully fluid and trickster combat we got from Souls and Bloodborne.

The excitement does grow when seeing FromSoftware’s trademark enemy designs and boss battles are there to be enjoyed, just in a different way. And there is even a pursuer-like enemy that has been introduced to play with the stealth mechanics – although we haven’t seen how that pans out.

I enjoy a variety of games, from Devil May Cry to Divinity Original Sin, so for me the change of pace is not unwelcome, and I am excited to see how FromSoftware delivers subtle cues of similarity whilst completely changing your approach and expectations. 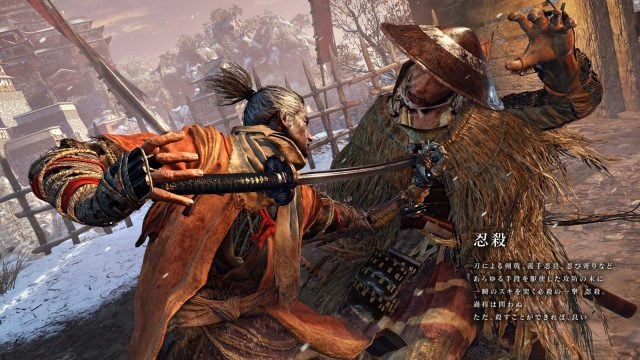 Be it by blade, ninja tool, stealth, or a sudden exploit, all kills are ninja kills. The method does not matter. All that matters is the kill.

If you are looking for your next RPG, Sekiro probably isn’t it – but Bethesda has you covered with Fallout 76, Elder Scrolls IV, and much more in our E3 2018 coverage.

7 comments on “Sekiro Demo Preview: Is it Souls?”