A detailed guide on how to clear the Saruman’s Ring wing of the Tower of Orthanc Raid in Lord of the Rings Online (LOTRO). This guide was written when the content was endgame so it assumes players are on level with the raid – it may be easier as years progresses and classes change. Saruman’s Last Wing Challenge is a true test of group skill 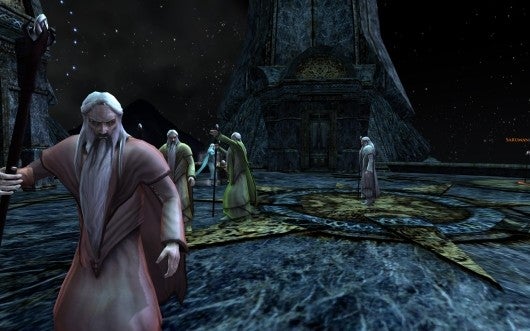 Saruman awaits for you atop Orthanc. Time to finish this!

As you enter the tower, Saruman will be in the middle of the room surrounded by altars with each ring you have encountered. Five players of the raid will pick up this rings and, the moment the last ring is claimed, the battle begins.

One tank will be positioned where Shadow and Acid clones spawn, ready to take aggro on them. The Other tank Will pick up Storm, Fire and Frost clones, however once aggro is stablished the Storm clone will be stunned for as long as possible.

The objective of the raid is to defeat Shadow and Lightning clones as soon as possible. We usually have our Captains use Oathbreakers back to back on Shadow clone and avoid all aoe on Shadow to preserve Storm mezz, and we save our ring powers for the Storm clone. It is of note that the raid will take significant damage from the lightning aoe, so minstrels should be ready with group heals.

Once Shadow and Storm are defeated, Acid becomes priority followed by Frost or Fire depending on raid preference. We usually burn the last clone down to 70k and stop dps to recouperate power and get in position for the transcision phase.

When the last clone of each wave is defeated, all ringbearers must come back to their altar and ready themselves to use the left power on their ring once Saruman attempts to reclaim it. The moment is marked by shining on the ground and the skill becoming available in your ring bar. Make sure to be in position and ready.

You have a few out of combat seconds to eat or use a rez.

The raid positioning and kill order is the same as Phase I, however the environment will now change as each clone will receive buffs from the real Saruman. We usually dps through this phase regardless of buffs, except for Lightning that, if coinciding to your DPS of Storm clone, could wipe your melee group. It is advisable to move away fromt the clone if he enters his buff phase as you are killing him, and move on to Acid instead whilst ranged burn down Storm.

During this phase, an effect equal to Shadow’s Wing red bubble appears. The person engulfed by the red bubble will take a persistant dot until healed to full health. We therefore designate a person to call out the bubbles or ask that raid members inform healers as soon as they are called out.

Have out of combat time

This phase is challenging as it requires everyone to be attentive to multiple pots whilst dpsing and kiting the clones out of clouds.

There are no bubbles or environmental buffs during this phase. Kill order is Shadow>Lightning>Frost>Acid>Fire

This phase is considerably easier than the previous one as there are no pots or bubbles to call out for. Clouds are still present so the clockwise movement is necessary. The kill order remains unchanged.

Saruman will execute regular aoes that can hit the raid strongly. Healers should watch for Frost aoe in particular and heal up those who are low in preparation for further attacks. Champions should use their bubbles regularly to help the healers.

This is the final phase and its outcome is decided in the early stages. Two of each clone appear, which demands the tanks pay extra attention to everything that is happening to sustain aggro.

The kill order remains the same, however the shadow clone can be problematic as his doppleganger will induct a heal for both of them. We therefore assign one champion or burglar to the Shadow Clone we are not Dpsing in order to interrupt the heals or mez him. The main target should also be interrupted when he attempts to induct.

As there are two Shadow clones to take down, control of Storm becomes harder, so tanks should be ready to protect the CC. Further, the Acid clones put stackable and uncurable dots on the tanks, making them take massive and sustained damage. When possible, Acid should be CC by a second Loremaster. Primary Loremaster must focus cc on storm since the beginning of the phase, using blinding flash on one copy, followed by Call to the Valar to refresh the skill, and inmediately using Blinding flash on the other  storm copy.

When less than 10 second of Daze remain, he should use the frost ring to reset adaptations and  then use blinding flash again to daze one of the copys. From here on he would have to rely on roots/stun/fear to cc the storm copys, and use any form of CC on the shadow/fire/frost/acid copys when needed, till the point adaptations make impossible to crowd control them

Clouds are still present on this phase, as are Saruman’s aoe attacks, so the raid should remain organized and moving clockwise when escaping a cloud. The Punt is particularly deadly in this phase as it is easy to get knocked off when chasing after targets.

Your kill order will always be: Acid > Shadow > Frost > Lightning > Fire. The reason for this is that the damage bubbles the Acids put out starting on phase II are very difficult to control with the other mechanics.

Your Burglar will mezz Shadow. Your LM will mezz Frost. On phase 5, you will need to CC one acid, two shadows and two frosts. Every round you must kill the acid, then interrupt/kill shadow in less than 70 seconds so you are ready to deal with Frost as it wakes. Everyone should have potions for each debuff available and be able to take them quickly.

This is the phase where all hell breaks lose and the most likely to kill someone. You must ensure you mezz the right targets and be ready to drop OB on the first Acid Saruman, and then use your other OB on the second. Your Shadows may cast when they wake, you should ensure a burglar is available to addle.

Staying alive is key so when the pots and punts start you want to be in the healthy situation of having your morale full. For this purpose, it is advisable to burn cooldowns early in the fight to prevent those early deaths, typically around the time the Shadows wake.

One comment on “Saruman’s Ring Guide: The Tower of Orthanc Raid”