In this Salt and Sacrifice Gameplay Hands-On article, we share our impressions from our time with the game via the PC Epic Store demo. The upcoming Souls-like Salt and Sacrifice doesn’t have a release date yet, but we have been playing the demo all week and discovering just how much the game will offer. If you loved Salt and Sanctuary and are looking to know what’s new with this title, we have everything you need.

Story: A New Twist in a Familiar Setting

The world of Salt and Sacrifice is shared with its predecessor, and your main xp currency remains as Salt. But not much is shared beyond that, as you are now a “Marked Inquisitor” – a criminal who has agreed to serve in the war against Mages in exchange for their life. Mages are powerful entities that roam the world and summon aggressive minions, leaving devastation in their wake. These magical entities seem to have once been human, but became consumed and obsessed with their power.

Your task as an inquisitor is to hunt these powerful creatures, weaken them, and devour their hearts to make their power your own – thus enabling you to seek and destroy the elite among the mages that threaten Altarstone Kingdom.

The demo promises to be rich in Lore and background options, with mysterious areas revealed by discovering their Runes, and secret areas hidden behind unlockable gameplay mechanics and mage heart consumption. You will coordinate your efforts from the hub of Pardoner’s Vale, where Runereader Diedela will help you discover the portals to the farthest reaches of the land 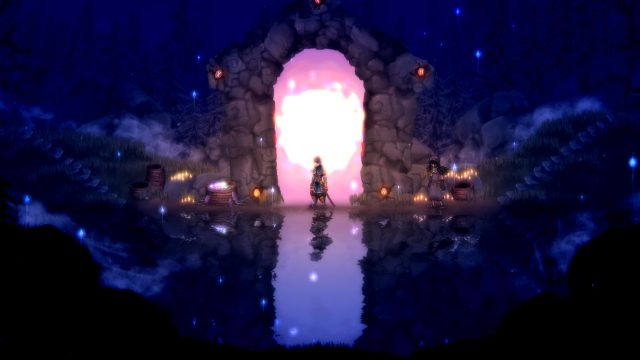 The hauntingly beautiful artstyle of Salt and Sanctuary is back!

Gameplay: Everything from Sanctuary and More!

Much like the original game, your character is fully customizable with a unique Origin called “Ancestry” that determines your overall looks, your choice of Crime which grants a starting gift, and a variety of starter Classes that determine your initial Equipment. The initial Classes are: Assassin, Cleric, Fighter, Duelist, Highblade, Paladin, Ranger and Sage. There’s a good variety of melee and ranged classes, with different playstyles and weights behind them: An Assassin is actually nimble and quick to roll, while a Paladin will use its shield to block heavy damage, but have to endure “fat rolls” that are often not ideal. 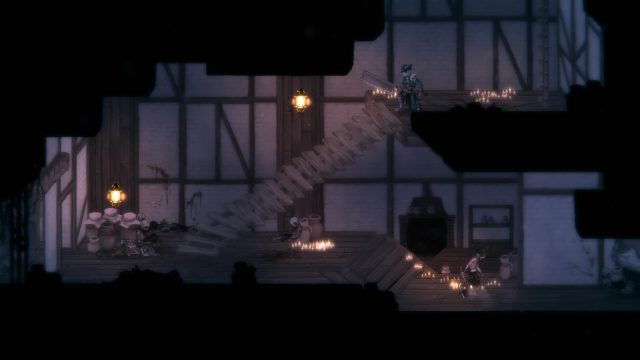 Exploration remains a fun and complex aspect of the game

The game begins much like any Souls game, with you arriving into the Vale and facing an enemy that will most likely kill you. You awaken under the care of your fellow inquisitors, who will then assist you in getting started with your first assignment.

You thus teleport to Ashbourne Village, and must make your way through the local monsters to find the Contracts for the mages that plague the location. Once you obtain a Contract, you will be on a hunt and get a subtle but noticeable “wind” that points to the general direction of your quarry. You must progress through, defeating the enemies that lay ahead of you, until you encounter the mage.

The first mage you fight is a fire-based Monster that summons some flying creatures and an incredibly annoying Spider. You don’t have to defeat the minions to progress, just inflict enough damage on the mage that it will relocate to somewhere else. As you chase your target, it will summon more allies and move further into the region you’re exploring. This aspect reminded me vaguely of Monster Hunter, and Salt and Sacrifice does take some inspiration here.

Eventually, the mage will decide it’s time to stand its ground, and a short “presentation” of the boss will ensure you see the name and you will be locked into an area for the boss fight. Any enemies already in this area will also attack the mage, who will summon its own minions to defend itself. From here, this plays out much like previous Bosses in Salt and Sanctuary, and you can expect to find the mage in this same location should you die and have to run back. 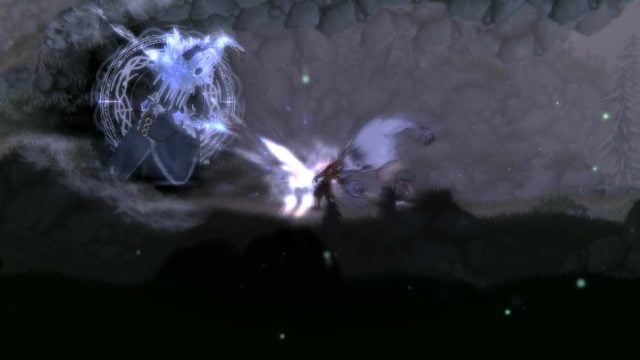 Mages specialize in each of the game’s several Damage Types

For the demo, I initially ventured forth as a Paladin, and found that the heavy playstyle of the class was not to my liking. I had trouble defeating the pyromancer mage due to its quick attacks and unblockable fire, which led to several frustrating deaths and lots of lost salt, as the game retains its death penalty that demands you pick up your earnings before dying again. This was compounded with my lack of familiarity with the controls and some unresponsiveness that is obviously to be expected from a very early alpha of the game.

I swapped to the priest class, that had some better agility and a mace with magic healing, and beat it in a couple of tries, then moved on to my familiar “polearm cleric” from the previous game as soon as I found a spear.

From this moment on, I found my groove and everything became a lot easier. I started to understand how gathering and crafting works to replenish my ranged equipment, and I learned to travel back to the hub to spend my salt and increase my HP, plus delve into the Tree of Skill of the game. 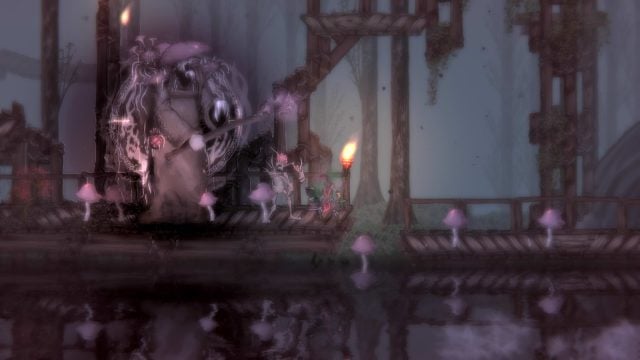 Each hunt felt unique and fun

In the demo, each level up will increase your Max HP and grant you a “Black Starstone” for unlocking skill nodes in the tree. A “Grey Starstone” is obtained every few levels, and it is used to reset a spent node.

The game then allows you to follow different branching paths that will improve your stats: Strength, Dexterity, Vitality, Will, Endurance, Arcana, Conviction, Resolve and Luck. Much like Souls, each of these stats affect your weapons based on their Scaling, plus other bonuses such as Luck increasing Item Find rate, Will increasing your Stamina pool, and Endurance determining your Equipment Load. From my exploration of the tree, the game will give us the known Light Armor and Heavy Armor based with each going up to 5 “classes”.

The weapon types currently available in the skill tree also go to Class 5, and feature:

In this regard, you can expect Salt and Sacrifice to provide you the same level of customization and perhaps even more, as I can spot many Weapon Types and Weapon Class types to build for and experience each unique gameplay on its own. This is one of my favorite parts of the game and I am already hooked and thinking about what to try next or what to build next, and the myriad of options that the game is teasing me with make for exciting theorycrafting even this early in development. This is before you even consider Weapon Upgrades and Crafting! 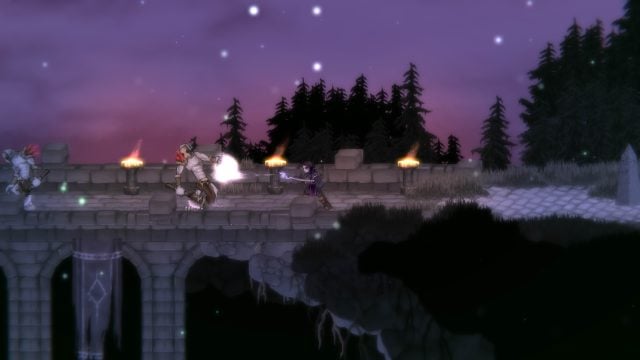 As you explore the lands within the Kingdom, you will find many materials that you can harvest. These are often simple items to create more healing and mana potions or replenish your stock of ranged ammo. But some materials and items dropped by enemies and magi are actually used to upgrade your gear, create new gear, or upgrade your stock of consumables.

Enhancing: You can upgrade your equipment using Magestones. As you upgrade, runes will appear in your gear and you will need to gather higher level materials. This applies to Weapons and Armor alike.

Crafting: Engage in “Carnifice” and use the flesh and bone relic of mages to create new Weapons, Armor, Charms and more. During the demo, your hunts can yield Class 2 equipment as well as give you the option to craft “Trophies” to display within your tent in the safe hub. The remains of each mage usually yield an armor set resistant to their element, and a weapon set that deals one of their damage types: Physical, Fire, Cold, Poison, Light and Dark.

Hunter Tools: Trista, the Verdantvoice awaits at the hub to identify the herbs and materials you find in the field, and help you discover new potion and consumable recipes. You can use the Apothecary’s Tools nearby to enhance your Hunter Tools, giving yourself more Ammo or Potion capacity by using the flowers, herbs and items you find when exploring. 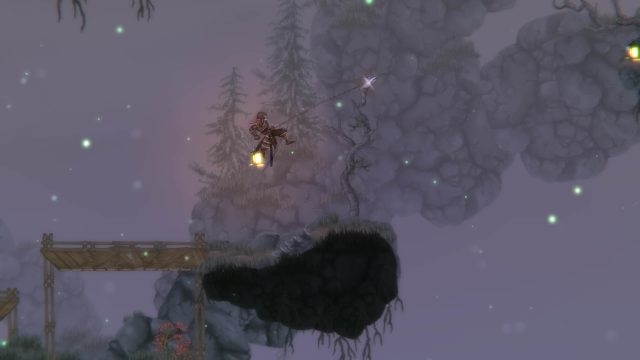 You will unlock a grappling hook to reach new heights

The multiplayer of Salt and Sanctuary is one of my favorite aspects of the game, so I’m very excited for the upcoming features with the sequel. Whereas the original game limited you to local and couch co-op, Salt and Sacrifice is instead embracing a full souls-like covenant and online experience. You will be able to use asynchronous features such as leaving messages for others, and engage in fully coordinated PvP and Co-operative play. The game features six factions:

Invasions and coop both work only when the player isn’t “Spellmarked”, which is the equivalent of being “Hollow”. When you want to engage in online play, you need to use a Guiltless Shard that can be looted from many places on the landscape or purchased from a demo vendor. Once you are in the “Atoned” (human) state, you can intiate co-op by using a “Golden Candle”, or wait for PvP adversaries to join as you play. Guardian faction members can be summoned into other worlds even when being Spellmarked.

These features are obviously very exciting, but as the demo was very limited I had no luck finding others to play with, so I was unable to test the many features available. I did see messages almost everywhere I went, so I look forward to the demo becoming public in the future and being able to experience this aspect of the game.

Something that I would like to note that I was very disappointed by: The demo did not provide local co-op options, or I was unable to find them. I tried plugging in a secondary controller and attempting to find a menu for local cooperation but it wasn’t available or easy to find. 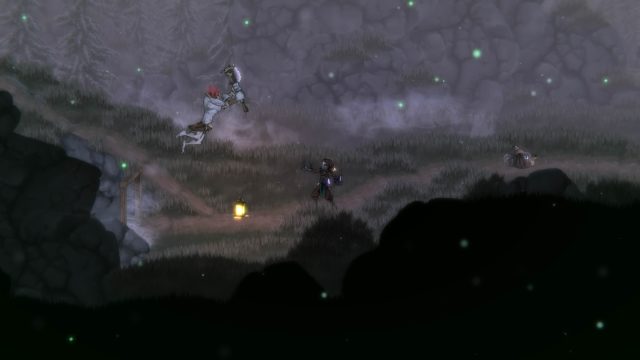 Build variety makes all the fun!

I begun my Salt and Sacrifice experience expecting to play Salt and Sanctuary 2.0, and I am happy to report it feels like more than that. While I initially struggled to get used to the controls and the new tempo of combat, I eventually found my mage-hunting feet and begun to zoom about the levels with style.

Weapons feature many and interesting moves and special abilities, and provide true variety in gameplay approaches that will satisfy those looking for an engaging combat experience. The exploration is enhanced by unlockable tools that allow you to access more areas, staying true to the metroidvania feel of the title.

Finally, the Mage hunts add a great element of replayability to each zone, as returning to farm them for materials and challenge them all over again becomes addictive as you try to complete your gear sets.

The game is shaping up to be a worthy successor to one of my favorite games, with a lovable art style and unexpected depth hidden around every corner. The multiplayer additions sound promising if they work as intended, so I encourage everyone to participate in any future demos designed to provide feedback.

There is no set release date for Salt and Sacrifice, but there is an overall goal of 2022, so there’s plenty of time for the devs to take in feedback and polish the game further, so help us out by letting us know what you think of the gameplay and details on this video!

Salt and Sacrifice will be available for PlayStation 5 and PC for USD $19.99 Q1 2022 in English, French, Italian, German, Spanish and Portuguese.

One comment on “Salt and Sacrifice Gameplay Hands-On: The Soulslike Monster Hunter You Can’t Miss”