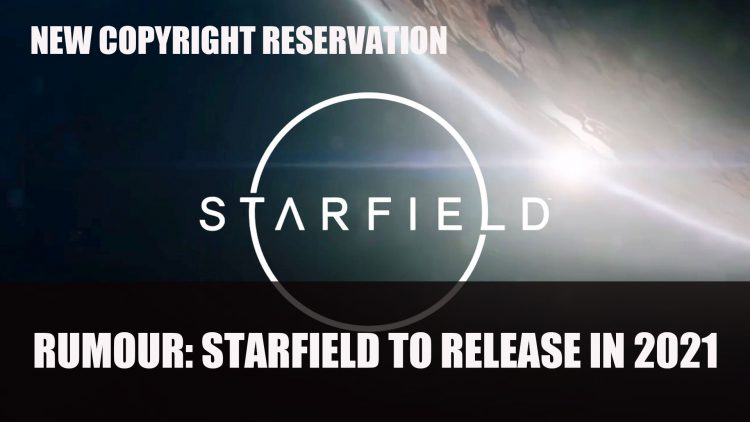 Bethesda’s next RPG is Starfield which could be releasing in 2021 according to a new copyright reservation.

Rumour: Starfield Is Still Planned to Be Released in 2021

Starfield could be launching in 2021 according to the latest copyright reservation. After Microsoft acquired ZeniMax Media, the parent company of Bethesda, we could be expecting to see something soon, maybe around the time of E3 2021.

Starfield is the next big RPG title to be coming out of Bethesda, and it slated to release before The Elder Scrolls VI. It’s been a long time in the making, even going as far back as 25 years, when the initial concept was just a dream.

However after Bethesda revealed the sci-fi RPG at E3 2018, there has been little word on what the title is about and when it will be releasing. But a recent sighting of a copyright reservation posted by Twitter user MrMattyPlays, has the 2021 next to the copyright symbol. According to the Twitter user one of their contacts at Bethesda claims the RPG title Starfield was actually supposed to release by the end of 2021.

Adding further support to this claim, a business attorney Richard Hoeg who goes by the user name Klobrille, trademarks of these kinds usually happen “when the work is made available to the public without restriction”. While doesn’t exactly confirm things that’s good to know.

I guess it means *something* will happen with Starfield publicly this year?

“The general rule is that the year in a copyright notice is the year of first publication of the work. First publication is when the work is made available to the public without restriction.” cc @HoegLaw https://t.co/MRShjRmqQI

However, not to put a damper on this spark, due to the ever-shifting development schedules since last year due to the pandemic, it wouldn’t be a surprise if this was pushed to 2022. It was only in February this year when ResetEra was ablaze with possible leaks of the release window also being 2021.

This copyright sighting is a little more official, but we’ll have to wait and see if it’s any indicator of Starfield being released as soon as this year. With E3 2021 coming up in June, some news may be underway.

Recently a charity auction was set up for the top bidder to get their very own character in Starfield which went for $14,000 USD which will benefit Make-A-Wish Mid-Atlantic.

Be sure to drop by our Starfield wiki for all the latest info.

For more news be sure to check out next Bandai Namco Confirmed For E3 2021 – Will There Be Elden Ring? and Lost Soul Aside Gets New Gameplay Video Featuring Combat & More.