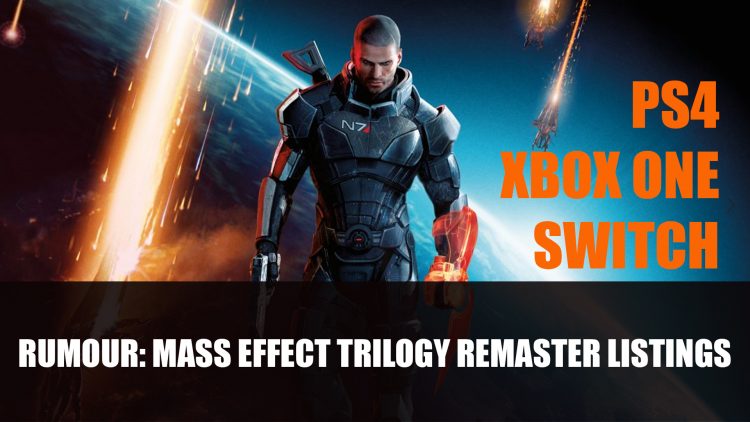 Adding further fuel to the fire, the Mass Effect Trilogy Remaster rumours have intensified as a Portuguese retailer listings appear.

The internet is no stranger to buzz around the Mass Effect Trilogy Remaster, which has already had a fair few speculating it may be underway. Now listings for the remaster have sprung up on a Portuguese retailer Gaming Reply with place holder box art, which lists the trilogy for PS4, Xbox One and Switch.

..Mass Effect Trilogy listings have gone up on a Portugese retailer website, with a temporary boxart that has a new logo on ithttps://t.co/84mrMawGXA pic.twitter.com/Eunn36zOjF

The listings have been now been removed however, which makes all this the more intriguing. According to the latest tweet from netzien Nibel, the logo is based on the past trilogy released for Xbox 360. The listings however were new.

It was back in July of this year that a new art book called The Art of the Mass Effect Trilogy: Expanded Edition appeared on Amazon for pre-order, stating it will release on February 23rd 2021. This sparked fans to discuss whether EA were going to announce EA’s Play Digital event but sadly nothing was revealed.

According to the new listings that appeared on the gaming retailer, the Mass Effect Trilogy Remastered collection is coming to consoles and set for October 2020. Both PS4 and Xbox One are priced at 59.99 €, while the Switch version was priced at 49.99 €.

Both Electronic Arts and BioWare have not officially confirmed whether this is in the pipeline, so until an official word released, we’ll have to continue to hope this is actually happening.

For more news be sure to read next Conan Exiles: Isle Of Siptah New Expansion Now Released Into Early Access and Rumour: Final Fantasy XVI To Be Revealed At PS5 Showcase.