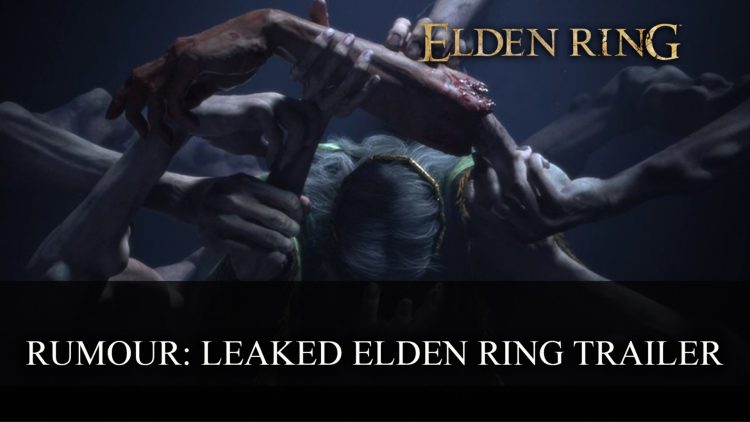 A leaked trailer for Elden Ring is apparently circulating in online chat groups which was confirmed by VGC.

A trailer which is apparently for Elden Ring is currently circulating online labelled ‘Bandai Namco confidential’. Video Games Chronicle has backed this claim and shared they have seen the video, but for legal reasons has not shared the clip.

As for what’s in the trailer, VGC describes a montage of souls-like melee combat, boss battles against a “fire-breathing dragon”, plus a large sword-wielding enemy, and the glimpse of horseback combat in an open area.

But that’s not all, in the trailer there is some narration:

I can only imagine what drives you to seek the Elden Ring. I suppose you can’t be talked into turning back. Very well then!

The trailer also describe Elden Ring as “an all-new fantasy action RPG franchise from the creators of Dark Souls, Bloodborne and Sekiro”.

VGC also shares that there is only a portion of the clip shown, not revealing the release date for the game. This could be due to a number of disruptions to development over the last year with many working from home.

This leak could imply an official reveal maybe underway. Reporter for Bloomberg Jason Schreier has also supported this claim of a trailer, sharing on Twitter that “tangible evidence” is around:

This is what I meant when I said there’s tangible evidence we’ll see it soon: https://t.co/ZdAT2IYiHo

Another high profile report Jeff Grubb from GamesBeat also shared he’d heard whispers of the title to have some sort of unveiling soon. There were further rumours over the weekend that it may happen at the Xbox event this month. However, Xbox marketing boss Aaron Greenberg quashed these hopes, confirming there would be “nothing coming soon that would feature game announcements or world premieres like this”.

Just to set expectations: this is not happening. There are always things we have in the works, but nothing coming soon that would feature game announcements or world premieres like this. https://t.co/nO868SCbpZ

This leaked trailer does come at an interesting time though as just last month Elden Ring received a provisional rating of PEGI 16. This could mean it may be ready to be submitted for an official rating soon, which takes place towards the end of development. Unfortunately, this is all the confirmed recent news we’ve heard for a while, with the exception of some early Elden Ring concept art that dived a little deeper into the first teaser trailer that announced the game.

If you want to know what we thought of the footage shown, be sure to check out our analysis video below:

Elden Ring has little known about it at this point, but for what has been confirmed you can check out our Everything We Know About Elden Ring: Release Date, Action RPG, Souls-Like, Open World. Curious about possible classes, races and stats theory for Elden Ring? Check out our video. We also discuss Elden Ring Factions, Covenants, Reputation and more.

For more news be sure to check out next Skyrim Adventure Board Game In The Works and Genshin Impact Next Banner Announced Hu Tao.