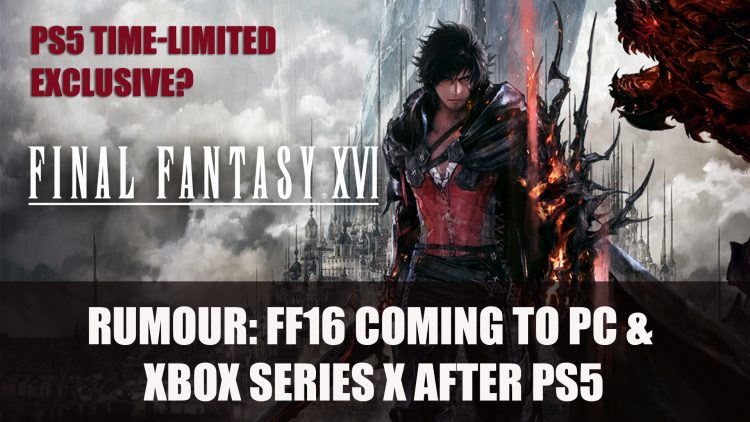 Square Enix announced that Final Fantasy 16 was coming to Playstation 5, but a recent listing may suggest it will be coming to PC and Xbox consoles after.

When Final Fantasy 16 was revealed, it was announced it would be coming to Playstation 5, which suggested a console exclusive. However, a recent listing on the official Sony Australia website includes details about it being a time-limited exclusive which was caught by a Twitter user RedMakuzawa:

Final Fantasy XVI is a timed PS5 console exclusive. At least according the official PlayStation site it is. https://t.co/Y4Pai3GjL6 pic.twitter.com/KV1BXP5btS

The small print reads “Not available on other consoles for a limited time”, which suggests that other platforms will have access to the latest entry in the Final Fantasy series, but only after PS5. Exactly which platforms or how long it will remain a limited time exclusive is unknown, which could range from 6 months to a longer stretch of a year time limit.

It was also mentioned during the Future Gaming PS5 Showcase in September last year, originally in a slide that FFXVI would be a time-limited PS5 game, but it was later taken out hinting that it would be a permanent PS5 exclusive. This recent listing info may change that. So far there is no announced release date for the game.

So far what we know about the story  for FFXVI is that it is a tale of revenge following protagonist Clive Rosfield. It continues the theme of Eikons, powerful but deadly creatures that exist within Dominants, a man or woman that can call upon their deadly ability.

Final Fantasy XVI is currently confirmed to launching on Playstation 5.

For more news be sure to check out next Swords Of Legends Online One Of The Biggest Chinese MMOs Heads West This Year and Monster Hunter Rise Celebrates Over 5 Million Units Shipped With Free Commemorative Item Pack.