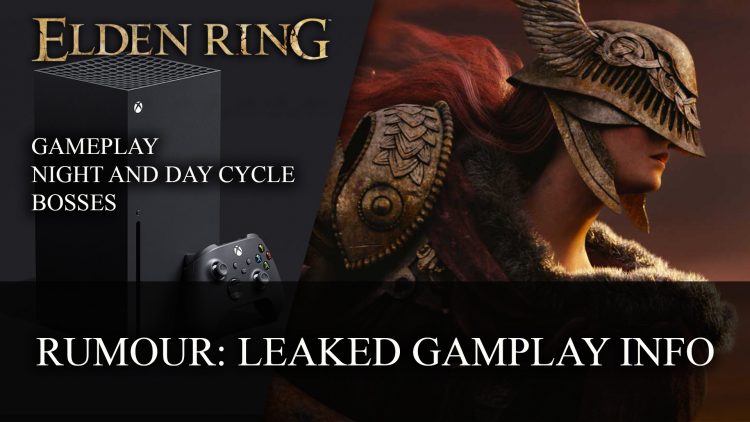 According to a recent article, Elden Ring details that were suppose to be announced during the Xbox Game Showcase have leaked before the event.

A leak may have just surfaced via the Spanish gaming news website Somosxbox, which shares details of upcoming Elden Ring by Fromsoftware. The article states on a 4chan forum translation teams have leaked “info” that has some interesting details about the elusive game.

According to the leak Elden Ring will have gameplay is similar to Dark Souls and Dark Souls 3 but slower, with added mobility of jumping like in Sekiro but specifies “no wall jumping”, so likely no grappling in this one. But it also lists air dodge, which sounds fairly flexible.

There will also be no classes, characters will be customisable much like Bloodborne, with the added mastery coming from covenants and guilds, with plenty of options, more so than “All souls combined”, which sounds like all souls games combined. You can also travel by ghost horse, that you can summon when needed and it also “carries equipment”, which could mean it doubles as inventory storage but it is unclear. FromSoftware have already confirmed that travelling by mount is a feature of the game, but a phantom horse sounds right up their alley of dark fantasy.

Speaking of inventory management, players will experience inventory design similar to that of Demon’s Souls but with easier management. This is interesting that Demon’s Souls has been mentioned since it’s not long ago that the Demon’s Souls remake was announced under Bluepoint.

Now onto the most exciting part, bosses. According to this summary, there will be 5 mains bosses each in charge of their own kingdom. There are also 12 other regular bosses that also reside. Boss health bars will act similar to Sekiro, with phases that you must counter.

In terms of the world Elden Ring, there is a day and night cycle, with strengthened enemies at night fall, but in usual souls form, the higher the risk the higher pay off, with better loot. But what’s interesting is that bosses will also be stronger at night time too. As for other souls-like elements there aren’t difficulty options, but you will have “refills” similar to what is seen in Sekiro, health elixirs and items. Bonfires also exist but the info shares “not literal bonfires”, which could be taken as the cities act as a place of rest instead.

These leaks currently support what has be revealed already by the developer, supporting a large world, full of dark fantasy and challenging enemies. The leak also states we’ll be getting screenshots soon and details will be revealed on Xbox Games Showcase stream which has now been announced for July 23rd this month.

From this supposed leaked info it’s hard to say whether there is a drop of truth to this, as a lot of this could be guess work made on the current info available. Although, a day and night system that buffs enemies sounds interesting and will make you think twice about venturing out during the night. We will have to wait as see if the Xbox Series X event will give us finally some much awaited details on this mysterious Action-RPG.

While you could disregard the 4chan post, a lot of info is supported by the resetera user Omnipotent who has been an active poster regarding FromSoftware for some time, who has in the past been correct about what they’ve shared. Their account has now been deleted since they have decided to hang up their insider cape (which was shared in one of their posts), but the posts are still live on in the forum.

One of their posts mentions the day/night cycle and even a weather system, making the world feel alive in a living, breathing world:

A departure from statics worlds to a more meaningfully and active one…The game also has weather cycles…Ultimately you’re left with a world that feels a lot more alive and like I said immersive. Like this is a place where things live.

The post explains the world is of its own nature, not affected by player choices but changes on its own. As for the enemy difficult, Omni does mentioned the change in AI progression, which sounds kind of terrifying:

Accompanying this are some changes and improvements to AI and design that has found new ways to trick the player into a false sense of security before being murdered. We’ve now leveled up from things hiding behind a corner and popping out to either slit your neck or kick you off a cliff, now we’ve got more involved and elaborate jebait mechanics to go with a more sophisticated world.

Enemies sound like they will be much harder to kill and in some cases much harder to anticipate, adding further challenges that could catch you off guard.

For a recap of confirmed details for Elden Ring you can read on below:

What We Know About Elden Ring

While we do have an article/video that goes into some detail about Everything We Know About Elden Ring, here’s a quick recap on what’s been confirmed:

You can also check out our Elden Ring wiki for all the latest info as it releases.

If you don’t want to miss anything about Elden Ring, bookmark our Elden Ring News Feed, or the Elden Ring Wiki Homepage, where we will be sharing the latest information, news, gameplay and details on Elden Ring as soon as they are live.