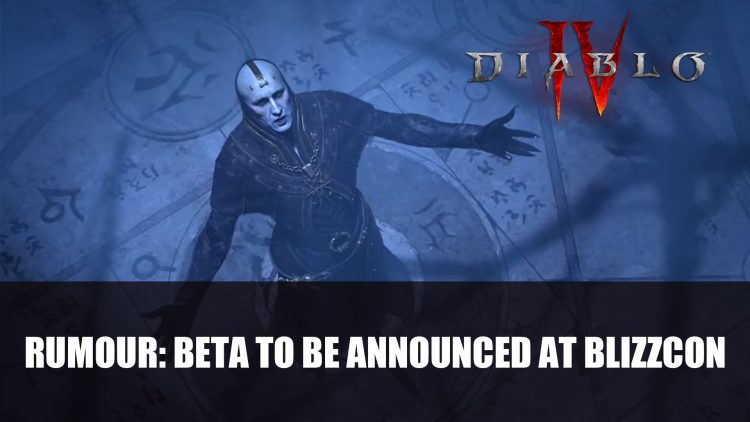 A possible Diablo 4 beta might be incoming, with BlizzConline 2021 happening this weekend.

Rumour: Diablo IV Beta to be Announced at BlizzCon 2021

Speculation is rife as we draw closer to BlizzCon 2021 this weekend, and the rumours are many, especially around the “What’s Next” panel for Diablo. One particular possible hint that a beta might be incoming, as recent sightings of changes on the Alpha/Beta access help screens have been noticed.

Reported by BlizzPlanet, they shared screenshots of the beta access page, which have recently updated. This comes as quite a coincidence as BlizzCon is kicking off this weekend. Could Blizzard be ready to announce details of a beta for Diablo 4? The pages updated include Diablo IV, Diablo: Immortal and World of Warcraft.

While we already know Diablo 4 won’t be launching anytime soon, not this year at least according to the recent Activision Blizzard earning’s call earlier this month, which confirmed a launch would not be this year. An announcement of a beta, which doesn’t even happen soon, a release window perhaps could be on the horizon.

The pages unfortunately don’t give any more clues about how close we might be to a beta testing program, but it does show us it’s on their mind. By checking the Google cache is shows the pages have been updated as recently as February 15th. 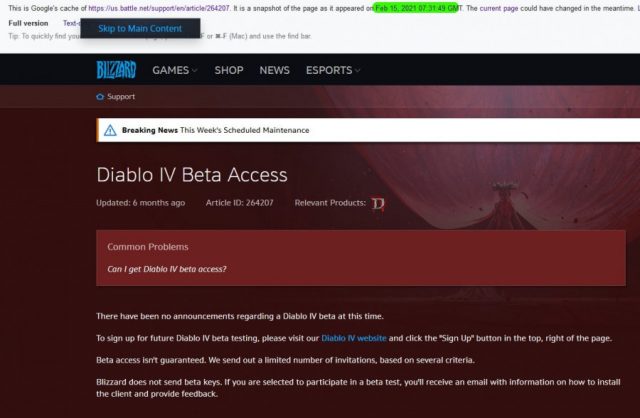 Is Blizzard ready to announce a Diablo 4 beta at BlizzCon this weekend? [Image via Blizzplanet]

So far there is no news or confirmation about any testing programs for any of the games mentioned by official sources, but we’ll keep our eyes peeled this weekend as the Diablo panel unfolds.

If you want more Diablo 4 be sure to drop by our Diablo 4 wiki for all the latest.

For more news be sure to check out next BlizzConline 2021 Schedule Promises What’s Next For Diablo and Blizzard Shares Diablo 4 Won’t Be Releasing In 2021.